We attended an evening of great Jazz at the Italian American Club last week to see and hear what all the local excitement is about: a new singer named Jonathan Karrant. And are we glad we attended?  You bet! This is a classy guy, who is well schooled in the use of his vocal chords, styling, and selection of material. Nothing seems to bother him, not even when the sound is not to perfection, nor the lighting.

Karrant was born in Fort Smith, Arkansas in a home filled with music and love.  His mother, Nancy, was a dance instructor and dancer in the local Ballet company, while his father, John, a businessman and broker, ran the family farm outside of Fort Smith. “There was always music in the house, and I just naturally was moved towards a musical career,” he told me after the show.

His first gig, at age seven, was in a local church and the inspiration he received that day moved him even further to follow a career in the world of entertainment.  I’m personally glad he kept at it because this is a man who really, truly, loves this very special brand of American music: Jazz. Fortunately for us he has decided to move to Las Vegas and share his talent with us. I call his style New York Jazz as compared to the more familiar West Coast Jazz. After all most of his formative years in the jazz world took place in New York and along the east coast. I personally really enjoyed his styling.

Jonathan surrounds himself with great musicians and do they work their butt off. The quartet is comprised of Mikan Zlatkovich on piano, Ken Seiffert on bass, Angelo Stokes on drums, and Bill King on the trumpet. Together they swing with sweet sounds and when each man takes a solo (there are several them, which is standard fare in jazz) do they shine!

The theme of this show was “Autumn in New York,” which gave way to a very wide musical library. The first few songs were “Autumn leaves,” “I’ll take Manhattan,” “20 something,” and “On Broadway.” We knew, by this time, that this was going to be another one of those special nights where we would go home having just seen a fabulous new (to us) entertainer with a bright future. He can flat out sing and knows what Jazz is all about. He is also very loose on stage and easily connects with his audience.

A few more of some great jazz favorites were richly performed: “Down in the Depths,” and ‘Autumn in New York,” before he invited his special guest, and another young man who is a jazz aficionado, Chadwick Johnson to the stage. Now you readers all know what this writer thinks of the rodeo champion/singer (who incidentally just won a new Dodge Ram Truck at a local rodeo). They paired up on “New York state of mind,” which was perfect and another standing ovation led Chadwick into a solo of “Imagine.”

All together Jonathan Karrant performed over 17 musical selections which followed the theme for the evening—New York, including: “The Great City,” Drinkin’ Again,” and a very new number, “Spiderman” from the Broadway show. Chadwick returned to perform ‘Valerie,” and as the clock continued to tick it was getting close to that time to close.  Jonathon finished off the evening with “New York New York,” and one of my personal favorites, “The Curtain Falls.”

He will be returning to the Italian American Club Lounge on Thursday, Nov. 24, from 6:00 p.m. to 10:00 p.m. Then it’s off to California, New York and elsewhere for this extremely talented and classy entertainer.

Just want to remind all you readers out there who enjoy great comedy, that comedian Steve Shaffer, who has appeared on dozens of TV shows, including VH1’s “Stand-Up Spotlight,” Comedy Central’s “The A-List,” Fox’s “Comic Strip Live,” “An Evening at the Improv” and the biggest of all, NBC’s “The Tonight Show,” is performing this week at the Laugh Factory inside the New Tropicana Resort. His fellow comedians, helping with a delivery of laugh making routines, include Rick Corso as the featured act, and doing the hosting honors is JR De Guzman. Show times are 8:30 and 10:30 p.m. with tickets beginning at $34.95.

Tony Sacca has lived and worked in Las Vegas for 35 years and has been an integral part of the entertainment industry as an entertainer, singer, TV host, producer, and performer. Prior to moving to Las Vegas in 1981, Sacca toured the country as one of the country’s top show bands with his identical twin brother Robert. 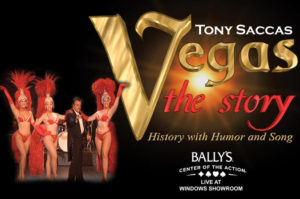 After 33 years, Sacca is back being the ultimate showman and performer as he shares the Las Vegas’ famous past with his new show “Tony Sacca’s Vegas The Story,” history with humor and song. An original musical production, the show was written and created by Sacca with additional material from the late David Brenner.

“Tony Sacca’s Vegas the Story” is funny and nostalgic with a multimedia video presentation that explores the history of Las Vegas over the past 100 years. It is performed Tuesday through Saturday at 2:00 p.m.in the Windows Showroom at Bally’s Las Vegas.

Sacca illuminates the story of Las Vegas from 1904 to the beginning of legalized gambling in the 1930s, the passage of a quickie divorce, and the building of Hoover Dam, up until today. Also included is a glimpse into the future of Las Vegas in the year 2050. The show puts a special emphasis on the resident headliners who made Sin City “The Entertainment Capital of the World.” Sacca sings the songs of legendary headliners Jimmy Durante, Elvis Presley, Frank Sinatra, Donny Osmond, Sonny Bono, Louis Prima, Wayne Newton, and Bobby Darin.

Tickets for “Tony Sacca’s Vegas The Story” are $39.99 general admission and $49.99 VIP, plus tax and fees. The VIP package includes a Las Vegas musical clock and meet-and-greet. To purchase tickets, call 702-777-2782 or visit Bally’s Las Vegas Box Office. For more information about the show, visit http://tonysacca.com/vegas-the-story/.

Schmidt Peterson Motorsports (SPM) announced today that it will cease operations in the Indy Lights presented by Cooper Tires Series, starting in 2017. SPM began as a Lights-only entity in 2002 and currently holds the longest-running tenure in the series. During its 15-year operation, the Indianapolis-based team became the most successful in Series history, acquiring seven championships, 74 race wins, 82 poles and eight Freedom 100 victories.

The team’s presence can be seen in the forward progress of the Mazda Road to Indy ladder system, with nine of the 2016 Verizon IndyCar Series drivers having competed for SPM at some time in their racing careers. Team co-owner Sam Schmidt, who is also a resident of Las Vegas, considers this a benchmark of the team’s legacy and cites economics as his decision to withdraw from the series.

“This is probably the most difficult decision I have had to make as a team owner since our founding,” Schmidt said. “Indy Lights has been our cornerstone for 15 years and not being on the grid at St. Pete next March will certainly be disappointing. Unfortunately, or fortunately, our IndyCar commercial opportunities are expanding greatly, the SAM Project has several new initiatives for 2017, and Conquer Paralysis Now is exploring new programs. Ric [Peterson] and I want to make the IndyCar team great, not just good, which requires time and resources.

“We are hopeful our legacy will continue through the many IndyCar drivers that are now competing full time in the series as well as engineers and mechanics that have graduated as well.”

Despite the redirected focus on its Verizon IndyCar Series entries, the SAM car (a semi-autonomous vehicle collaboration with Arrow Electronics), and Schmidt’s foundation Conquer Paralysis Now, SPM will continue to support the growth of Indy Lights presented by Cooper Tires.

Teenage sensation Tommy Ward, recently signed to a management contract by music icon Quincy Jones, will be headlining in the showroom this Sunday (Nov. 20) inside the Italian American Club, 2333 Sahara, at 4:00 p.m. Ward is a graduate, and an example, of what Frank LaSpina has accomplished with the Musical Arts Scholarship Program. During the 90-minute performance, titled “Tommy Ward sings The Sunny Side of Life”, a program of happy and uplifting standards assembled by LaSpina. Frank will introduce Ward and the rest will be all Ward. Some of the musical selections that will be performed include: “Put on a Happy Face,” “When You’re Smiling,” “High Hopes,” “What a Wonderful World,” and “Look for the Silver Lining”. Tickets are only $20 with proceeds benefiting the Musical Arts Scholarship Program, a non-profit organization that helped Tommy get his start. 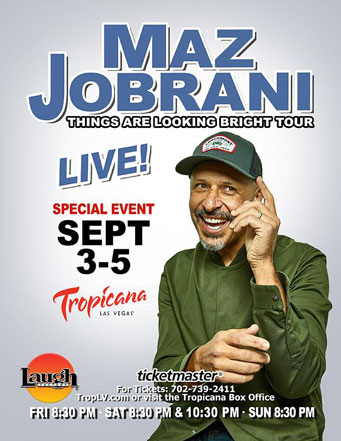 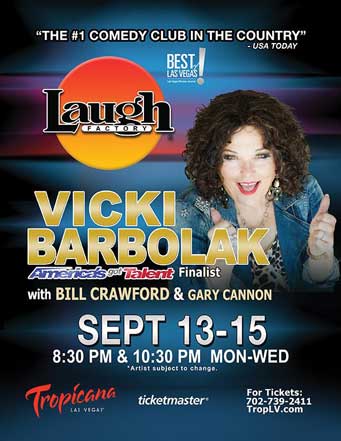