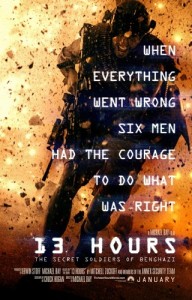 I just got home from watching a movie.  It deals with a place located in Libya named Benghazi. Ever hear of it? Of course you have. How could you not unless you haven’t owned a TV, a radio, do not subscribe to magazines or even a lousy newspaper for the last three years?  Anyhow, the movie “13 Hours: The Secret Soldiers of Benghazi,” is the story of a few (6) American’s who defended (some with their life) a little bit of America where 36 Americans lived and worked in the corner of a terrible little city of no consequence for 13 hours on September 11, 2012 (remember 9-11-2001?).

I can’t remember the last time I took on the task of selecting what I thought you, the public, should spend a few dollars on for a movie.  But, gang, if you want to see what America is really all about, instead of watching a bunch of bullish politicians who will do anything to get a vote, you should go see this movie! Then remember what you heard on that TV, or read, or heard on the radio about what happened at that little spot on the map for 13 hours.  It could just maybe make you think a wee bit.  Are our Generals really in charge? Or are the political’s doing the decision making? Have they been dumbed up so much that they can’t think for themselves, or react without calling someone in Washington D.C. first? You will stand like a vast majority of us (every seat was filled) did at the end of the movie, and applaud. The last time I remember that happening was when we saw “The Sniper.”

Anyhow, I hope you go see this movie. The action is non-stop, the acting is damn good, and the story is there. There’s no politics involved, thank God!  Just the story of a few fighting Americans, who were there to do a job, and they did just that! And, they came home to no fanfare, with the memory of those 13 hours firmly implanted in their mind, and the four who came home draped under an American flag.  That’s a lot to live with. Thank God we have warriors like these men.

A vigorous trio of comedians has taken over the stage at the Laugh Factory this week (Jan. 18-24), inside the New Tropicana Hotel, with Mike E. Winfield headlining what is sure to be a “Madcap” night of zingers. Assisting Winfield is Jay London, who never holds back on any subject, and hosting the evening is Kristi McHugh. Show times are 8:30 and 10:30 p.m., nightly. And, Andrew “Dice” Clay returns with his special 10:00 p.m. show on Thursday (Jan. 21) for another few days of his unique style of humor.

Mike E. Winfield, within a few minutes of being on stage will describe what has happened in your life that very day. Many often leave his show saying, “Does he live with us?” A strikingly brilliant comedian, Mike E. has not slowed down since his debut on The Late Show W/ David Letterman, and then winning a reoccurring role on NBC’s The Office. His success is rapidly rising and you may have seen him on Showtime’s Comics Without Borders, Comedy Central’s Live at Gotham, and the Arsenio Hall Show.

Jay London is known for his long curly hair and bib overalls. His signature line is “You might recognize me, I’m the fourth guy from the left on the evolutionary chart,” referring to his slouching posture and unkempt appearance. London’s comedy is usually self-deprecating and laden with quips such as “0 for 1”, “This is death!” and his trademark line, “It’s almost over.” During his run on Last Comic Standing, he made a guest appearance on The Tonight Show with Jay Leno. After Last Comic Standing, London joined fellow Season 2 competitors Gary Gulman and Alonzo Bodden as part of the “I’m Still Standing” comedy tour. In 2004, Jay made a number of appearances on the game show Street Smarts, and made guest appearances on the CBS sitcom The King of Queens, the TBS reality show Minding the Store, and Bravo’s All-Star Reality Reunion.

Kristi McHugh has appeared in the movies “Deuce Bigalow, Male Gigolo” and Disney’s “Jack of All Trades.” TV credits include Spike TV’s “I Hate My Job,” “Millionaire Matchmaker” and the crime reenactment show “Scene of the Crime” on TBS. She has been the head writer and principal character in the Improv show “The Empire,” picked up by Dish, Digital and Punch TV.

Sahara Wellness, a medical marijuana dispensary, had its ribbon-cutting ceremony last Saturday. There are three unique things to discuss about this unusual celebration. The ribbon cutting took place at exactly 4:20 p.m., the address is 420 E. Sahara, and the owners are all women.

For those who may know the meaning of those particular numbers, no explanation is needed. However, for those of us who have no idea what they mean it’s very simple.  April 20 (4-20) is embraced by “pot smokers” every year as “Weed Day.”  I’ve been told that it started somewhere near San Francisco back in 1990, in a parking lot where the “Grateful Dead” was doing a concert.  Why 420? Long story!  Look it up in Google for the rest of the story.

So, when the ladies were looking for a great location a realtor showed them the building on east Sahara. Its size was perfect for what they needed, but they also were aware that it would need almost a total re-build according to Paula Newman, one of the investors. As they were beginning to talk about it, they learned that the actual address at that time was (and of course remains) you guessed it, 420 E. Sahara. It was an omen. How perfect was that she said, with a smile? That clinched the deal.  Sahara Wellness was born and all four ladies, Brenda Gunsallus, Alexandra Davis, Stacey Huffman, and Newman had their dispensary and a very special address.

The all-female owners of the dispensary have been inspired and motivated towards the alternative medicine offered through cannabis by their own individual personal experiences. Conditions that can be helped by medical marijuana have played an important part in all their lives. 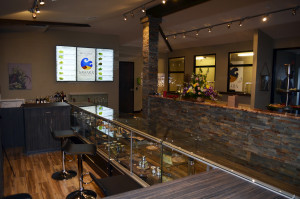 We were given a tour of the facility by Ms. Newman. Of course we asked a bunch of questions and she answered as many as she could. Needless to say, the ladies were looking forward to the actual opening last Monday when they would receive their first delivery. You will not be allowed inside the building, by the way, without first showing your medical card. That’s the law.  The tour was only allowed because their cannabis supply was not in the building.

I was especially interested in treatment for my old legs, which just doesn’t have very good circulation. At one time, well to be honest, from when I was 13 until I was 62 I smoked cigarettes. A lot of them! I eventually became known as a two-pack a day smoker. Fortunately, I was able to quit when I had an incident in 1995, and have not had a cigarette since. So, I’m not very anxious to get back in the habit of having that damn round object between my fingers and me puffing on it. I don’t want to get back in the habit! So I asked was their an alternative? “Yes, there is…we can give it to you in an oil that you can apply to your body, or even in a pill form,” Newman replied. That was good to hear. Now, all I have to do is decide should I talk to my doctor and get the form filled out so I can get my treatment started. Still working on that idea. According to the price chart it’s sorta expensive, and of course it’s not covered by my HMO.