Well, gang, another year has slipped by so darn fast, I can’t believe it’s ending. The big thing for this writer was my 80th birthday party in February , staged at the Railroad Pass Hotel & Casino , by my former wife, Cathy Bittinger and my wonderful special friend, Nancy Barr. More than 125 invited guests showed up to partake in some great food, lots of booze and some wonderful stories by a few of my friends.

A lot of things happened over the year. The Mint 400, which is having a terrific resurgence since the Martelli Brothers took over its promotion in 2012, is definitely at the top of my list. The 2013 race saw a huge turnout of racers, including a well-known actor, Patrick Dempsey , who was following in the footsteps of his personal heroes, James Garner and Steve McQueen. And, he won his division. Mel Larson and this writer, were honored with the “Legends & Heroes Award” at the drivers meeting. Matt Martelli presented each of us with a fantastic and beautiful special watch, produced by Oakley. That was quite a surprise.

Two of my favorite people made appearances’ in Las Vegas during the year, Deana Martin and Mary Wilson. Deana appeared at the South Point Hotel & Casino last July, and just finished doing her annual Christmas Show at The Smith Center. Mary made a special appearance at the Wounded Warrior Project, specially produced for Las Vegas by Ed Mathews, and staged at the M Resort & Casino. Another friend, Pia Zadora, began her residency at the world famous Piero’s Restaurant, on Convention Center Drive, with her favorite conductor, Vince Falcone. Kelly Clinton, and her husband, Clint Holmes, continue their public services by appearing at a lot of Las Vegas benefits throughout the year, besides traveling to New York , where they have served notice that they belong in the Big C! Damn, I have to say it–they are truly what show biz is all about, giving back and paying forward.

Las Vegas Motor Speedway continues to push for a second NASCAR Sprint Cup weekend, and, just maybe, the speedway will be able to announce that they have secured a second race by the end of 2014. Here’s hoping so! They certainly deserve it more than some of the cities that already have a NASCAR weekend!

The F.I.O.R.E. (Fun Italians Organizing Ridiculous Events) Club continues to stage some fantastic monthly meetings at the Italian American Club (IAC) , (and a few special evening parties). The club is comprised of a group of guys (all of us are Presidents ), and now the gals have been allowed to attend. With the addition of the Ladies, the attendance has really grown. Hummm, I wonder why???? The club actually gathers to just have fun, listen to some very interesting speakers and give away fun gifts (a few are actually worthwhile, however). Entertainer and long-time resident, Nelson Sardelli , founded the ridiculous club a few years ago, to counter another club that was dissolved suddenly in the early 2000s. The other club hasn’t been heard from, while the F.I.O.R.E. has continued to grow. Hummmm, another ???? mark. 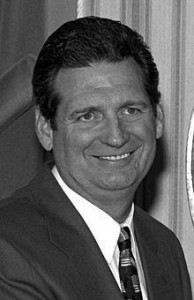 Governor of Nevada, and one of the best liked by the way, Bob Miller. Miller has held many titles, including Clark County District Attorney. Bob will talk about his new book, “Son of a Gambling Man.” The luncheon gets underway at 11:30 a.m. and costs $25.00. This is a good one, gang.

As I approach my 81st birthday, I continue to lose friends. That is the sad part of growing old. Heck, I never in my right mind, believed I would live to see 80, let alone to actually begin receiving social security checks. Wow! I miss my friend, each and every one, and I honor their memory. I miss two very special buddies, Robert Goulet (who passed on Oct. 30, 2007), and Freddie Bell (who passed on Feb. 10, 2008). Both of these guys were tremendous entertainers, and were loved by a ton of people.

Ron Pearson will be headlining at the Laugh Factory, located inside the New Tropicana Resort, this week (Dec. 30, 2013-Jan 5, 2014), along with Quinn Dahle and P.J. McGuire. Pearson is a comedian, actor and world-record juggler whose humor has captivated audiences across the globe. Ron has appeared in multiple TV shows including “Malcolm & Eddie,” “The Drew Carey Show,” “That ‘70s Show,” and many more. He has made appearances on late-night shows including, “The Late Late Show,” “The Dennis Miller Show,” and also found time to host game shows, and reality TV shows for the Family Channel and Discovery Channel. Dahle has a huge background, with appearances on “The Tonight Show with Conan O’Brien,” Showtime, Comedy Central, “Lopez Tonight,” and “Last Call with Carson Daly.” Quinn is a smart, clean and witty stand-up comic with impeccable timing. Originally from Minnesota, he made the move to Los Angeles to pursue a career in comedy. He tours from coast-to-coast, and has entertained troops internationally. His comedy appeals to all age groups and ethnicities, and he loves to talk about them all. Being married to a Mexican-American from east LA, he is never short of material; however audiences often come back just for his improvisational crowd work.

McGuire is a Las Vegas comic, whose unique energy and stage presence are infectious. He takes audiences on a trip into his rough childhood in Los Angeles, and his take on marriage and raising kids is irreverent and over the top. McGuire has performed in comedy clubs all over Las Vegas, the United States and internationally. He has appeared on Sirius XM Radio’s “Howard 101,” and the 2012 film “Finding the Funny,” starring Brad Garrett and Louie Anderson. Making a change in his schedule this week will be the resident comedian/magician, Murray SawChuck. Murray is adding a special 7:00 p.m. show, in addition to his usual 4:00 p.m. show, through Jan. 5. For tickets and further information call 702-739-2411.