Hosted by Miss USA 2011, Alyssa Campanella, and Chet Buchanan of 98.5 KLUC, the pageant featured more than 50 contestants who competed in swimsuit, evening gown, and interview.  In the end, Sanchez and Taylor were the judges’ picks. The newly-crowned beauty queens will represent Nevada at the Miss USA and Miss Teen USA competitions later this year.

As Miss Nevada USA 2014, 23-year-old Sanchez hopes to bring awareness to women’s and children’s issues as a titleholder. She currently donates her time to The Shade Tree, (an organization in North Las Vegas that provides shelter to women, children and animals who are in danger), and is passionate about continuing her work with organizations that empower women. She enjoys learning about new cultures by traveling, and even lived in Hong Kong in 2012. Her hobbies include international travel, martial arts, hiking, volunteering, mission trips and cooking in her spare time.

As Miss Nevada Teen USA 2014, 15-year-old Alexa Taylor hopes to give back to the community and help mentor her peers. Taylor is a member of the National Charity League, a mother-daughter philanthropy organization, which enables her to volunteer for more than 15 local Las Vegas charities. In her spare time, she is a competitive cheerleader and tumbler, and likes to dance, swim and spend time with her family. Throughout their reigns, Sanchez and Taylor will make their mark on the community with charitable endeavors, will become style icons on the red carpet, and will bring pride and joy to their state while competing at Miss USA and Miss Teen USA later this year.

Rich Hall, who headlines at the Laugh Factory, inside the New Tropicana Hotel,  Monday, Jan. 20-26, along with Harris Peet, shot to prominence as a cast member of Saturday Night Live. Hall also gained fame with numerous appearances on “Not Necessarily the News,” “The Late Show With David Letterman,” “Fridays,” “Sniglets,” and the “Tonight Show.” Rich’s brand of humor spread across the pond, making him a top selling and in demand comedian in England, regularly performing to sold out crowds. Critics have hailed Hall as one of the best acts in comedy, and David Letterman says, “Rich Hall is the real thing.” Peet is not only a funny comedian and actor; he also took many pucks to the head as the practice goalie for the Los Angeles Kings for more than 10 years. Harris was one of the regular voices on the cult animated hit series “The Ren & Stimpy Show,” and has appeared in countless films, including “The Five Heartbeats,” “Blankman” and “Reign Over Me.”

Jeff Altman will be appearing at the Laugh Factory, Friday through Sunday, Jan. 24-26. To witness a performance by Altman is to realize that there are still a few people in show business who desperately need medication. With more than 40 appearances on “The Late Show with David Letterman,” the “slightly unhinged” Jeff Altman combines physical comedy with keen, honest observations about everyday life. Jeff  has guest-starred in dozens of network prime-time shows, ranging from such pop culture classics as Baywatch and Dukes of Hazzard, to his own critically-acclaimed Showtime specials, “Jeff Altman‘s Scrapbook” and “Sweet & Meaty.”  His numerous film credits include “Highlander II,” “American Hot Wax,” “Soul Man,” and “Easy Money.” Show times are 8:30 and 10:30 p.m., with tickets priced from $39.95 to $44.95. 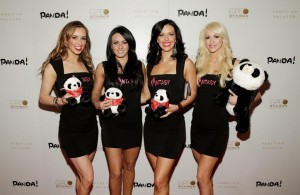 My wonderful friend, Nancy Barr, and Steven Shinn, were married in a fabulous  outdoor Hawaiian Wedding ceremony at the Blue Lotus Hanmi Healing and Teaching Center, 5150 S. Pecos in Las Vegas, Sunday, Dec. 29. Nancy is a well-known psychic reader, spiritualist and columnist, while Steve has been a local attorney since 1999. Before practicing law, Mr. Shinn was a Planner/Researcher for Lt. Gov. John Waihee, the Hawaii State House of Representatives and the State Department of Planning & Economic Development. He graduated from the University of Hawaii in 1974, with a Master’s Degree in Urban and Regional Planning. Shinn earned his Juris Doctor degree from the William S. Richardson School of Law in 1983.

Entertainment for Nancy and Steve’s wedding was provided by the Tevakanui Polynesian Dance Troupe, owned by Henry and Yvette George. Additional music was provided through Kay and Derek Miyano of ADG Reality, and the vocalist was Pitty Pat Guidry, who has worked with Dinah Shore, Bob Hope, Doris Day and The Beach Boys over the years. It was my personal pleasure to “walk the bride down the path to her husband.” Also attending the Luau wedding were long-time friends, Keith and Cher Jones, Mel Carter, Jackie Brett, Barry and Louise Berlin, Shelley Stepaneck, who were among the more than 100 guests at the outdoor reception. I personally wish them “A hundred year walk holding hands…”