This is my favorite time of the year, as it is for a lot of us who see spring just around the corner. For me, and about 100,000 racing fans however, it’s when the “Boy’s and Gal of Thunder” invade our village for NASCAR weekend at the Las Vegas Motor Speedway. That’s right, gang, the speedway almost becomes the fourth largest city in Nevada, beginning this Thursday (March 3) and ending on Sunday afternoon following the checkered flag for the Kobalt 400.

For me, personally, it’s when I get to watch the new young bloods of the sport coming up the ladder, and perhaps say goodbye to some of the older drivers. I fell in love with auto racing beginning in 1947 (age 14), while I was growing up in Los Angeles. That’s when I had a motor scooter paper route, and had enrolled in auto shop at Washington High School (no longer standing). I was learning how to take a four-cylinder 1929 Chevrolet engine apart, do some tricks to it, and “Hello,” you suddenly had more horsepower. It’s also when a bunch of us built a jalopy to take out to the new dirt track (an old city garbage dumping ground) built by J.C. Agajanian, called Carrell Speedway. It was a quarter-mile track at the time, and as its popularity grew its owner began to expand the seating (wooden grandstands), ending up in 1957 being re-named Ascot Motor Speedway, and the track enlarged to a half-mile banked dirt speedway.  Parnelli Jones, who went on to gain fame as an Indy 500 Champion driving for J.C. also got his start at the old dirt track, where he eventually became the track champion. Jones began racing at the track when he was 15 (we are the same age) and he only knew one speed then and now: foot to the floor board! He eventually was talked into racing in the Mint 400 Off-Road Race in 1968 by me (I created the race in 1967), and Parnelli went on to become a great Off-Road Champion too. We have remained friends over the years, and in 2014 he was honored by the Mint 400 promoters as its Grand Marshall, a well-deserved honor indeed!

So now we have NASCAR in town. The guys at the speedway, Jeff Motley and Neil Reid, have kept all of us writers well informed as to what is planned for the track and its spectators. Here is a few of those notes:

Award-winning country star Craig Morgan will highlight pre-race activities for the Kobalt 400 when he performs the national anthem before the NASCAR Sprint Cup Series race at the speedway on Sunday (March 6).  The native Tennessean and U.S. Army veteran is perhaps best known for his chart-topping hit “That’s What I Love About Sundays,” which was named as Billboard magazine’s number one country hit of 2005. Morgan, a two-time Inspirational Country Music Award winner, is also known for his breakout songs “International Harvester” and “Redneck Yacht Club,” among others. The 51-year-old, who is also a sheriff’s deputy and former EMT, will be in Las Vegas performing at Race Jam on Fremont Street on Saturday, March 5. Morgan is the host of the popular television show “Craig Morgan’s All Access Outdoors,” which airs on the Outdoor Channel. Joining Morgan for pre-race activities is the popular group The Atlantic City Boys, who will perform before opening ceremonies for the 19th annual NASCAR Sprint Cup Series race at LVMS. The Atlantic City Boys perform hits of all kinds, from Beatles and Beach Boys songs, to top hits from the Bee Gees, Four Seasons and members of the “Rat Pack.”

Kobalt 400 pre-race festivities will also include a flyover by the famed Thunderbirds, as well as driver introductions and the NASCAR Sprint Cup drivers’ meeting in the Neon Garage. The Neon Garage in the superspeedway’s infield opens at 7 a.m. PDT, LVMS’ 2016 NASCAR Weekend begins Thursday, March 3, with a free practice session that runs from 9 a.m. to 1 p.m., and Stratosphere Pole Day follows on Friday, March 4, with NASCAR Sprint Cup Series qualifying beginning at 4:45 p.m. The Xfinity Series’ Boyd Gaming 300 takes place at 1 p.m. on Saturday, March 4, and the weekend’s crescendo comes on Sunday, March 5, in the form of the Kobalt 400 at 12:30 p.m. For tickets, call 1-800-644-4444 or log on to LVMS.com. 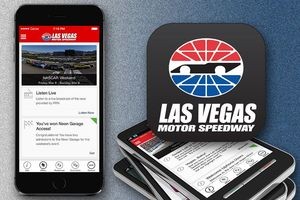 Whether you’re a race regular or a first-time fan, anyone visiting Las Vegas Motor Speedway during the 2016 NASCAR Weekend can find everything they will need to know via the LVMS app. Chocked full of information ranging from facility maps, shuttle routes, daily news and schedules and fan information, the LVMS app has it all. The easy-to-use app – which can be easily downloaded to any mobile device – also includes a social media hub so you can tap into all of LVMS’ social channels, as well as helpful venue information to assure a stress-free experience. Fans who want to know anything from what time the qualifying sessions run to when driver introductions begin can use the app as a one-stop-shopping source of information.

The app will be updated in real time with schedules, driver appearances, ticket upgrade information, directions, traffic tips and even live audio.  As if that wasn’t enough, the app also houses the innovative LVMS Fan Zone, where you can go to have fun and earn chips redeemable for prizes and merchandise in an interactive environment that is easy to navigate. From answering trivia questions and voting in polls to performing social media tasks, there are plenty of ways for fans to use the social rewards program to earn chips that can be used to claim a variety of special LVMS- and NASCAR-related items. Any iPhone user can download the app via THIS link, while Android users can access it HERE

Thanks to the Las Vegas Chapter of Speedway Children’s Charities, racing fans attending the speedway have a number of fun ways to get involved in the festivities. The charity’s slate of race-week events kicks off on Thursday, March 3, with the Driver and Memorabilia Auction, continues with Richard Petty Driving Experience rides on Saturday, March 5, and concludes with the annual Track Walk on the superspeedway on Sunday, March 6, prior to the Kobalt 400. Each event is unique and a fun way for fans to get an up close and personal experience they will remember forever.

“NASCAR Weekend is always big for Speedway Children’s Charities, and it’s great to be able to offer so many fan-friendly events during race week,” Las Vegas SCC Chapter Director Paulette Anderson said. “There aren’t many sporting events where fans have the chance to either walk or ride on the actual field of play, but thanks to LVMS and Richard Petty Driving Experience, we are able to offer that to our fans. The Driver Auction is also a ton of fun and is one of our most successful fundraisers all year, and we can’t wait to enjoy all of our events with fans during race week.”  The Driver and Memorabilia Auction takes place at 6 p.m. PDT. at Sam’s Town Hotel & Gambling Hall, where you can bid on all sorts of racing memorabilia. Fans can also bid online and can cast bids for the chance to participate in parade laps with NASCAR superstars that take place on the superspeedway before the Kobalt 400.  The RPDE rides give fans the opportunity to ride along with trained instructors as they circle the 1.5-mile track following the Boyd Gaming 300 on Saturday. A portion of the $159 ride-along fee will be donated to the Las Vegas SCC Chapter.  Hundreds of fans have enjoyed a nice leisurely walk around the track during the SCC Track Walk, which takes place on Sunday from 9-10 a.m. before the Kobalt 400. Fans can sign up for $25 before Feb. 29, or purchase wristbands trackside for $35. Children 16 and under are free with a paid adult.

Track Walk participants must pick up their wristbands and t-shirts and sign waivers at the SCC tent located behind the LVMS Gift Shop before 8 a.m. on Sunday, and each person who registers will receive an event T-Shirt sponsored by the South Point Hotel Casino & Spa. Participants can also pick up their wristbands between 11 a.m. and 3 p.m. on Friday, March 4, and on Saturday, March 5, from 8 a.m. to 12:30 p.m.  For more information on any SCC event, contact Paulette Anderson at 702-632-8242.

Boyd Gaming – the longest-running title sponsor of the NASCAR Xfinity Series Boyd Gaming 300 race – is getting revved up for Las Vegas’ NASCAR Weekend 2016! Boyd Gaming properties throughout the Las Vegas Valley will be hosting special events and promotions for the race, including live entertainment and the charity auction benefiting Speedway Children’s Charities. Events include: The aforementioned Speedway Children’s Charities Drivers Auction that will take place on Thursday, March 3 at Sam’s Town Live! inside Sam’s Town Hotel and Gambling Hall. During the live auction, attendees will have the chance to bid on the ride of a lifetime – a chance to join a NASCAR Sprint Cup Series or NASCAR Nationwide Series driver during the parade lap for the Kobalt 400 or Boyd Gaming 300. Doors open at 5 p.m. and bidding will begin at 6 p.m.

After the race, head to The Orleans Showroom inside The Orleans Hotel and Casino for the official Boyd Gaming 300 after-party, featuring The Marshall Tucker Band. Since releasing its self-titled debut album in 1973, The Marshall Tucker Band has influenced numerous country music performers, including Alabama and Travis Tritt, with its definitive blend of rock, R&B, jazz, country and gospel. With hit singles “Heard It in a Love Song,” “Fire On The Mountain,” “Can’t You See” and “Take The Highway,” The Marshall Tucker Band has earned seven Gold and three Platinum albums. The group also scored four hit singles on the Billboard country music chart and one on the gospel music chart. Showtime is 8 p.m. both nights. Tickets start at $29.95 plus tax and fees and can be purchased at any Boyd Gaming Box Office, by calling 702.284.7777 or by visiting www.orleanscasino.com.

Well, gang, see ya at the speedway.