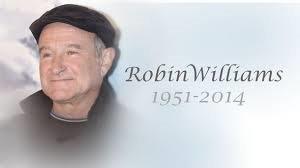 If you have been living on this beautiful earth since at least 1970, then you have enjoyed the comedy of Robin Williams. I believe I first recognized him when he landed on earth as “Mork,” in the TV series, “Happy Days.” God was he hysterical on that show!  So much so, that a new spin-off TV series was immediately ordered by his discoverer, Gary Marshall. “Mork and Mindy” was born! You have to admit it was a totally crazy show, but people were pulled to it because it was honestly a funny show. The only other comedian that I knew of, that could and would make Robin crack up, was Jonathan Winters, who had established the ad-lib, insane comedy that was known as “The Genius of Winters.” Williams got to work with Winters, when the character, Mearth, was created to boost ratings. Mearth arrived in a huge egg at the home of Mindy (played by Pam Dawber), on Oct. 21, 1981, and the rest is part of comedy history and of, “Improv comedy!” When these two comic geniuses would get together (so I have been told), “it was close the door Molly, ’cause you are never going to see this again!”

I was very fortunate to have the opportunity in the late ‘70s, or possibly the very early ‘80s, to have met both Winters and Williams at different times. And, I must say, they were both so darn down-to-earth it was funny. When I met Winters I knew he was an ex-Marine, and he seemed to really relish the fact I knew that. And, when I mentioned my father was a Marine, who didn’t make it home from Iwo Jima, tears welled up in those beautiful eyes.

The World has lost a wonderfully nice man, the soldiers have lost a real friend, and Comedian Heaven has gained another genius.  And, you just know who will be the first one to hug him upon arrival; the man who I truly believe was his personal icon, Jonathon Winters, who checked in to where all comics go in 2013. Rest in Peace my Funny Man. 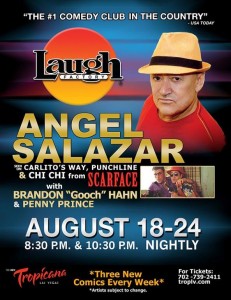 The Laugh Factory at the New Tropicana Resort on the Las Vegas Strip will surely be filled to capacity this week (August 18-24), because of the presence of a manic-human laugh factory, Angel Salazar, who will be headlining. Featured with Salazar will be Brandon “Gooch” Hahn, and Penny Prince who is hosting. Salazar is rather difficult to describe. His Cuban heritage and penchant for sporting mini-skirts notwithstanding, Salazar’s performance is a mixture of street-smart ethnic wisecracks, risqué humor, physical comedy, and audience involvement.

Angel is known internationally for saying “Sheck it out” (check it out) before, during, and after jokes. Salazar has been performing for over 20 years, and has been in numerous major films, including “Scarface,”  “Carlito’s Way, “Where the Buffalo Roam,” “Punchline,” and the cult film, “The Wild Life.”  Salazar directed the hit show “El Barrio USA,” which played at The Village Gate and Carolines on Broadway in New York City. Angel has opened for the Beach Boys, Billy Ocean, Whitney Houston, Van Halen, and The Miami Sound Machine.

A native Las Vegan, Brandon “Gooch” Hahn has been working as a stand-up comedian since 2000. Living in Las Vegas has afforded him the luxury of working with some of the biggest names in the industry, including Pauly Shore, Sebastian Maniscalco, Bret Ernst, Steve Byrne, and Larry the Cable Guy. Opening for Larry on numerous occasions has proven that Hahn can rock crowds of all sizes. When he’s not doing stand-up, Hahn is hosting his own afternoon FM radio show on KOMP 92.3, and his own internet TV show on www.vegasvideonetwork.com. One thing about “Gooch,” is that he’s out there visiting every comedy club he can, watching and learning, as he continues to become one of the best locally raised comedians.

“Amazingly hysterical” and “outrageous” are just some of the adjectives used to describe Penny Prince, and his rapid fire act. For years, Penny has entertained audiences big and small with his dead-on impressions, and wickedly funny observations. He started his comedy journey in Northern California, and quickly gained a reputation for his ability to impersonate just about anyone. He currently resides in Las Vegas, where he served as the house MC for three-years in the hit burlesque/comedy show, “Sin City Comedy.” He has also been seen on, NBC’s “Animal Planet,” and on “Comedy Central.” He has performed with Andrew Dice Clay, Mark Curry, and Ron White.

The Venues Group, a premier special event and entertainment facility group, celebrated the development of its downtown Las Vegas location, with a ceremonial ground-breaking event last week. Executives from The Venue Scottsdale, including owner and founder, Victor Perrillo, Vice President David Twigger, along with Mayor Carolyn G. Goodman, commemorated event with a brief press conference, and VIP event, to reveal information about the space, and to showcase architectural renderings of its future location, scheduled to open in February of 2015. Since 2006, The Venue Scottsdale, has been known as one of the most upscale and high-profile locations in the greater Phoenix, Arizona, area to host special events, including music concerts, entertainment shows, charity galas, wedding ceremonies,  receptions, meeting conventions, and tradeshows, as well as social events such as proms, reunions, birthdays, anniversaries, and more.

Expanding on its success in Scottsdale, The Venue Las Vegas will offer the same capabilities as the original location at its new property in the heart of downtown Las Vegas, on the corner of Fremont and 7th St., in the Fremont East District. The Venue will feature 36,000 square feet of unique and versatile special event and meeting space, with two full stories and a rooftop patio. It will include six indoor and outdoor event spaces for parties that can accommodate as little as 30, or up to 2,000 guests. Featuring exterior stone work and interior urban chic décor, the state-of-the-art event space will also include a built-in stage and entertainment hall, with full audio and lighting production. In addition there will be on-site gourmet catering with limitless culinary options, private rooms, outdoor patios, a VIP and billiards area, and V2 = Virtue & Vice Lounge, an upscale bar and lounge featuring specialty drinks and small plates. V2 = Virtue & Vice Lounge will be open to the public on a nightly basis, unless occupied for a special event buyout. There was also a mention of a Comedy Club on the site. Primed with a highly experienced in-house event design team, The Venue can customize and execute creatively themed special events of any size.

Founded by visionary Victor Perrillo, The Venue will add 200 jobs to the burgeoning downtown area, at a time when it is experiencing tremendous growth and economic upturn. “I’ve wanted to expand to Las Vegas for many years, and I purchased this land eight years ago,” said Perrillo. “I waited to build our second location until the time was right. With recent investments the community has made to revitalize downtown, we felt that this year was the perfect time to develop The Venue Las Vegas.”

Buy your tickets now for the Labor Day Dance to be held Thursday, Aug. 28, at Charleston Heights Arts Center, 800 S. Brush St. Enjoy the Jerry Tiffe Band performing standards from the 1940s, ‘50s and ‘60s as you dance from 7:00 to 10 p.m. This event for adults will include a no-host bar. Tickets are priced at $10 in advance and $15 on event day (if available). Call 702-229-6383 for tickets and information, or purchase tickets online. (If their site is offline, please try again later or call at the number below) For more information on Jerry Tiffe and his band, go online to www.jerrytiffe.com.  The Charleston Heights Arts Center, a cultural center operated by the city of Las Vegas, offers numerous arts programs and dances throughout the year. International folk dancing is offered every Wednesday from 6:30 to 8:30 p.m. Scottish country dancing is enjoyed on Fridays from 6:30 to 8:30 p.m. Contra dancing is available on selected Saturdays every month from 7 to 10 p.m., with group lessons at 6:30 p.m.  For details on upcoming performances and available classes, call 702-229-6383, or go online to www.artslasvegas.org/.