Bill Medley and his daughter, McKenna Medley, will team up once again to present the best of “The Righteous Brothers,” 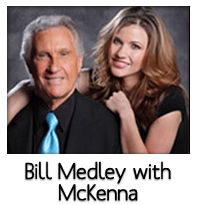 this weekend at the South Point Hotel/Casino. The two performers open Friday, Nov.9, and run through Sunday, with show times set for 7:30 p.m.

When Bobby Hatfield passed away in November, 2003, it was feared by many fans of the world famous duo that the end of an era was just around the corner. Medley had lost a friend, a business partner, and most of all, a singing partner with whom he’d been associated since they were in their late teens. But, for those who knew Medley, it came as no surprise to see him returning to the stage where he felt most at home.

Born in Los Angeles, and raised in Orange County’s Santa Ana, Bill always had a deep passion for music. Medley taught himself to play the piano, which eventually led to him writing songs. Every time he went to pitch a new song, he would get the same reply, “why don’t you record it yourself?” That’s when he turned to singing. His first group was called, “The Paramours,” and as luck would have it, he was eventually introduced to Hatfield, who led a group titled, “The Variations.” One night when the two singers were fooling around, they put their voices together, and the rest is now history. Their partnership lasted four decades, with a few breaks.

As Medley segues into a new portion of his career, he has no plans to find another permanent singing partner. The closest he comes to that, is when he performs a duet on occasion with his daughter, McKenna. And those are truly magical moments in time.

So, gang, get your tickets early, ‘because it’s sure to be SRO in the showroom, at the South Point.

They call him the “Man in Black.” The magical guitar artistry of “Esteban,” will be in Concert, at the LVH (formerly the Hilton) hotel, in the Shimmer Cabaret, opening on Thursday, Dec. 27. The world famous guitarist has signed a three month contract with LVH, to appear every Thursday and Friday evening, withshow times set for 8:30 p.m.  A Las Vegas resident, “Esteban” will perform along with his daughter, violinist Teresa Joy, a special selection of music ranging from classical, Flamenco, pop, to Broadway, and beyond, in a completely new format.

Stephen Paul was given his special name by the legendary classical guitarist, Andres Segovia, who called him, “Esteban,” during his years of study with the master in Spain (1974-1978), and the United States. Esteban was born in Pittsburgh, Pennsylvania. The son of a steel mill worker, he put his fingers on the strings of his first guitar at the age of eight-years old. 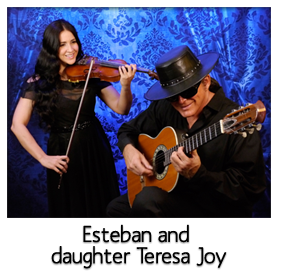 From that moment on, Esteban’s focus was on the guitar, teaching himself to play by practicing every spare moment. His desire was to one day study with the legendary guitarist, Segovia, but being self-taught, it seemed nearly impossible. He eventually graduated from Carnegie Mellon University in 1972.

After a relentless pursuit, Segovia finally permitted Esteban to play for him in 1974. Upon hearing Esteban play, Segovia invited him to Santiago de Compostela, in northern Spain, for master classes. After those classes, Esteban was invited to Madrid to study privately in Segovia’s famous 4th floor studio. In 1978, Segovia gave Esteban his endorsement, and he returned to America and began touring the world.

One year later, Esteban was in an automobile accident, involving a speeding drunk driver.  Because of severe damage to his left arm and hand, he lost his ability to play the guitar to his high standards for the next 10 years. By 1990, through dedication and the love of music, he began to once again play the music he so loved.

Since then, Esteban has topped the Billboard charts many times with his numerous albums, videos and DVDs. He has accomplished musical successes never before attained by any guitarist. Esteban has been featured on the front page of the Wall Street Journal, and his appearances on the Home Shopping Network established record-setting album sales.

Esteban’s concerts are memorable moments of the heart and soul. Spending an evening in his audience is an experience of the heart and mind, and one that will remain with you forever. Tickets are available by contacting the LVH box office at 702-732-5111, and range in price from $19.00 (for locals with proof of residence), $29.00 and $39.00 plus tax and fees. This is a must see show, folks! 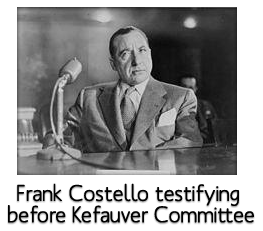 On Thursday, Nov. 15, The Mob Museum, located in the original downtown courthouse, will commemorate the 62nd anniversary of the Kefauver Committee hearings, which were held in the historic building in 1950. Nevada residents will be allowed free admission to the day’s activities. The one-day event, is being held to raise awareness of what took place 62 years ago, and the significance of the U.S. Senate Special Committee to Investigate Organized Crime, and its chairman, Senator Estes Kefauver. 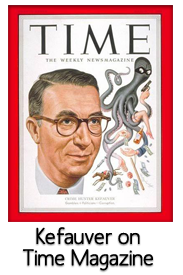 In addition to free admission for Nevada residents, programming will include, an all-day screening of Jon Rubin’s new hour-long documentary about the Kefauver Committee hearings: “Crimebuster: Senator Estes Kefauver, Politics, Television and Organized Crime,” beginning at 10:00 a.m. in the Museum’s multipurpose room. In addition, a proclamation by Las Vegas Mayor Carolyn G. Goodman, will be presented to the Senator’s daughter, Diane Kefauver, declaring Nov. 15, as Kefauver Day. Diane ended up having a political career of her own, serving as special assistant to Congresswoman Nancy Pelosi for nearly 30 years.” 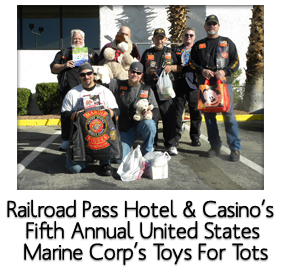 in staging Railroad Pass Hotel & Casino’s Fifth Annual United States Marine Corp’s Toys For Tots drive. George Kale (second from left rear row), an employee of the hotel, and his wife, help every year to organize the event. This year, the motorcycle run began from Red Rock Harley-Davidson store, with the first stop at Railroad Pass, where each rider donated a gift. All new toys will be distributed to the children of Southern Nevada. “This year was our fifth year of lending support to our Marine riders on their mission, of caring for children in need, within our valley,” Curt Thompson, Director of Operations for Railroad Pass said.”