Billy Joel will make his triumphant return to Las Vegas at the new T-Mobile Arena on Saturday, April 30. This will be the only time Joel performs in Nevada in 2016, and this concert marks the Artist’s first time in his extraordinary career to perform at T-Mobile Arena.

Having sold 150 million records over the past quarter century, Joel ranks as one of most popular recording artists and respected entertainers in history. The singer/songwriter/composer is the sixth best-selling recording artist of all-time, the third best-selling solo artist and is one of the highest grossing touring artists in the world. 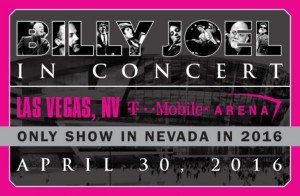 Joel is also one of the biggest live performing artists in the world and his concerts continue to break records in both arenas and baseball stadiums. In November 2014, Billy Joel received both The Library of Congress Gershwin Prize for Popular Song which honors living musical artists’ lifetime achievement in promoting the genre of song as a vehicle of cultural understanding; entertaining and informing audiences; and inspiring new generations, and the once-in-a-century ASCAP Centennial Award, which is presented to American music icons in recognition of their incomparable accomplishments in their respective music genres and beyond.

In December 2013, Joel received The Kennedy Center Honors, one of the United States’ top cultural awards. He is also the recipient of six GRAMMY® Awards, including the prestigious Grammy Legend Award. Joel has been inducted into the Songwriter’s Hall of Fame and the Rock and Roll Hall of Fame and has received numerous industry awards including a TONY AWARD for “Movin’ Out,” a Broadway musical based on Joel’s music. For his accomplishments as a musician and as a humanitarian, Joel was honored as the 2002 MusiCares Person Of The Year by the MusiCares Foundation and the National Academy of Recording Arts & Sciences.

Joel has also performed alongside other music greats at two the country’s most extraordinary benefit concerts – “12-12-12, The Concert For Sandy Relief,” which raised awareness and money for those affected by Hurricane Sandy and “The Concert for New York City,” which was held to help aid 9/11 victims and heroes. Billy Joel received a star on the Hollywood Walk of Fame in Los Angeles, adding another milestone to his brilliant career.

I have heard from a very reliable source that the world famous Improv at Harrah’s on the Las Vegas Strip will be closing its doors within the next couple of weeks. No official announcement has been forthcoming, but my source has always been very accurate with his information. I did try to confirm from executives at the home office but got no replies. No denials, no confirmation.

A vigorous trio of comedians will take over the stage at the Laugh Factory this week, beginning Monday through Sunday (April 25-May 1) inside the New Tropicana Hotel, with Bill Dawes headlining what is sure to be a “Madcap” night of zingers. Assisting Ray will be, Shayma Tash, who never holds back on any subject that comes into her mind, and hosting the evening will be Mark Serritella. Show times are 8:30 and 10:30 p.m.

Dawes is a triple threat: actor, comedian and writer whose high-energy delivery mixes adult subjects with comedy everyone can relate to. Bill has appeared in several hit shows, including “Sex and the City,” “Oz” and “Law and Order: Criminal Intent,” in addition to recurring roles on “Damages,” “All My Children” and “One Life to Live.” Dawes also played an acting and writing role in the DVD cult hit “I Hope They Serve Beer in Hell.” As a comic, Dawes co-starred in the Broadway show “Bronx Bombers,” where he starred as Mickey Mantle. He has performed all over the U.S. and the world, including tours in Canada, Hong Kong, the Philippines and South Africa.

Shayma Tash headlines comedy clubs across the United States and has performed for America’s troops in over 15 MWR tours including Afghanistan, Korea and Japan. Tash has appeared on “Chelsea Lately,” MTV’s “Punk’d,” the “Tonight Show with Jay Leno,” the “Best Damn Sports Show Period,” and has appeared more than a dozen times as a commentator for the E! Network. A favorite in the comedy circuit, Tash is an edgy, high-energy performer that you won’t want to miss!

Mark Serritella has been on Joe Rogan’s Podcast (Live from The Ice House) three times, Byron Allen’s Entertainers, Who Wants to Date A Comedian?, Comedy Central’s Open Mic Fight, The ‘About Last Night Podcast’ with Sean Astin, featured in the Huffington Post, the front page of Funny or Die and Business Weekly… and has been part of The Boston Comedy Festival 5 times. Mark has toured all over Europe and The Middle East.

The Rainbow Company Youth Theatre will present “Bridge to Terabithia” April 22-May 1 at Charleston Heights Arts Center, located at 800 S. Brush St. Appropriate for ages seven and older, this faithful adaptation of the Newberry Award-winning children’s book has best friends Jess Aaron and Leslie Burke create their own kingdom, the magical Terabithia, where they reign as King and Queen and their imaginations set the only limits. The powerful play of remarkable richness and depth captures the humor, warmth and emotional intensity of Katherine Patterson’s story. Show times are 7 p.m. April 22, 23, 29 and 30 and 2 p.m. April 24, 30 and May 1. Tickets, priced at $5 per person, are available online at https://recreation.lasvegasnevada.gov/ or by calling 702-229-6553 or 702-229-4614. There is no online fee.  Zachary Krause will portray Jess Aaron and Sage Fernandez will play Leslie Burke, directed by Brian Kral. Timothy Burris designed the set, with lighting by Jody Caley, sound design by Joel Ruud, and costume designs by Mariya Radeva–Nedyalkova. The cast and Rainbow Company ensemble crew prepare the sets and make the costumes, in addition to performing the show. 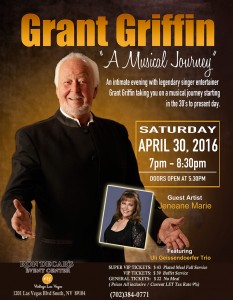 Grant Griffin will produce and headline an intimate one-man show, “A Musical Journey,” a travel in time from the 30s to present day, at Ron DeCar’s Event Center on Saturday, April 30, 2016, at 7 p.m. His guest artist will be legendary Jeneane Marie, one of the Las Vegas’ finest female vocalists. Griffin handpicked diva Marie who has opened for Frank Sinatra, Dean Martin, Don Rickles, Rich Little and countless other celebrities. Talented Uli Geissendorfer will head up the musical trio backing Griffin. When not performing in music festivals around the world, Geissendorfer teaches music history at UNLV and plays nightly at the Dispensary on East Tropicana, a place known for its Jazz. Griffin’s career spans over 50 years in show business. He has performed in more than 500 concerts worldwide and produced more than 90 musical events, with 22 of them in Las Vegas. Ron DeCar’s Event Center is located at 1201 Las Vegas Blvd. South, Las Vegas, NV 89104. For more information, visit www.rondecarseventcenter.com. Tickets for Grant Griffin’s “A Musical Journey” are $22, $39, $43 call 702-384-0711.

Well, gang, that’s about it for this week.  See ya at the movies.