Tommy T presents Bruce Bruce Live for a nine-week run at the world-famous Laugh Factory inside Tropicana Las Vegas. The Laugh Factory is celebrating its 7th anniversary at the Tropicana and  is thrilled to have comedy superstar Bruce Bruce, opening his Las Vegas residency in the 320-seat venue! Bruce Bruce is a name synonymous with keeping audiences rolling with laughter thanks to his captivating improv skills and larger than life comedic style.

Bruce’s steady style of comedy has been showcased across the country, and he has been entertaining audiences young and old, and of all backgrounds, for years. His wit, spontaneity and dazzling personality set him apart from other standup comedians. Although Bruce is known for his adult comedy, he prides himself on not using vulgarity to win a laugh and is no stranger in winning over new audiences with every appearance he makes.

From his role as host for two seasons of BET’s “Comic View” to his many appearances on tv and film, Bruce is clearly a comedian that has found his mark in the business. Bruce headlined the 2008 Just for Laughs Comedy Festival in Montreal, leaving the audiences north of the border in stitches. On the feature film front, Bruce made a cameo in the HBO Films feature “Idlewild,” appeared in the Larry the Cable Guy-starrer “Larry the Cable Guy: Health Inspector,” with Ice Cube in Columbia Pictures’ “XXX: State of the Union” and in the Screen Gems comedy “Think Like a Man.” He most recently appeared in the Paramount’s, Chris Rock directed, “Top Five” and you can catch Bruce starring with Marc Maron in the IFC “Maron” series.

Bruce Bruce can also add author to his list of credits. Bruce recently released his first book “Baby James Brown” from Penguin Publishing. Within these pages you will find hilarious stories from his childhood and learn more about what makes Bruce Bruce one of the most popular comedians in the business today.

Tommy Thomas, best known as Tommy T “The Godfather of Comedy” as referred to by most comedians he works with, has been producing comedy shows for the past 41 years. Tommy has owned and operated comedy clubs all over California, but he is best known for “Tommy T’s” in Pleasanton, CA, featuring some of the biggest names in comedy performing nightly such as Cedric the Entertainer, D.L Hugley, Sinbad, George Lopez, Mike Epps, and Paul Rodriquez just to mention a few. 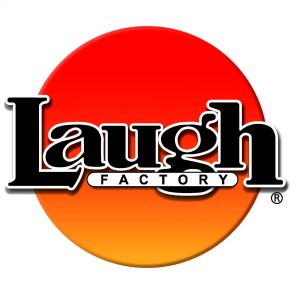 Since opening the doors to its original Hollywood location 40 years ago, The Laugh Factory has become known for launching some of the hottest stand-up comedians in the world, including: Tim Allen, Louie Anderson, Roseanne Barr, Drew Carey, George Carlin, Jim Carrey, Dave Chappelle, Dane Cook, Rodney Dangerfield, Ellen DeGeneres, Sam Kinison, and Robin Williams, and many more. With locations in Hollywood, Long Beach, Las Vegas, Chicago, Reno, and soon to open in San Diego. The Laugh Factory is known around the world as one of the premiere spots for comedy.

Bruce Bruce Live! is performed Thursday-Saturday, located on the mezzanine level of the Paradise Tower.  All shows begin at 7 p.m. with additional Midnight shows on Friday’s and Saturday. Tickets are $39.95 for General Admission, $49.95 for a VIP Table and $59.95 for Golden Circle and VIP booths (plus applicable taxes and service fees), and can be purchased in-person at the Tropicana Las Vegas Show Tickets desk, online at www.troplv.com or by phone at 800-829-9034. Bruce Bruce Live! is for ages 18 and up.

THIS AND THAT QUICKLY:.

The Mob Museum, the National Museum of Organized Crime and Law Enforcement, announces the addition of its newest artifact, now on view in The Underground, a Prohibition exhibition space. A phone booth from the Four Deuces, a club located in the Levee vice district south of downtown Chicago is now on display in the basement of the Museum. Named after its address, 2222 S. Wabash Avenue, the Four Deuces served as the headquarters of the Chicago Outfit, the crime syndicate run by Johnny Torrio and eventually by his protégé, Al Capone, in the early 1920s.

Torrio assigned Capone as manager and enforcer at the Four Deuces. The building had four floors – the saloon and their offices on the first, gambling and prostitution on the upper floors. Al Capone put in a furniture shop next door to the Four Deuces as a front. His business card read: “A. Capone, Antique Dealer.” The merchandise was strictly secondhand junk, and if someone actually called about buying furniture, Capone would reply: “We ain’t open today.”

In 1923, Torrio and Capone moved their main offices to the Hawthorne Inn in Cicero, Illinois, a suburb of Chicago. But Capone, using the alias “Al Brown,” still operated the Four Deuces, often parking his Cadillac across the street.

“This artifact’s ties to one of organized crime’s most infamous syndicates makes it an important addition to the Museum’s collection,” said Geoff Schumacher, senior director of content, The Mob Museum. “Through this exhibit, we provide a glimpse into the criminal enterprises that plagued the cities where Mob figures warred with one another to secure their share of the Prohibition era’s illegal liquor trade.” By 1931, the Four Deuces had been the site of 12 unsolved gangland murders. Capone and his henchmen used the building’s basement to torture and kill their victims, then dispose of the bodies through a rear trap door.

The phone booth was removed from the Four Deuces before the building was demolished in 1966. It resided in the home of Chicago television personality Bruce Newton for more than 30 years. The Mob Museum acquired the phone booth in 2019.

For more information, please call (702) 229-2734 or visit themobmuseum.org. Admission to the speakeasy is included with general Museum admission and free any time for patrons using the daily password found on Instagram stories @MobMuseum_Underground.

Batter up! The first-ever Battle for Vegas Charity Softball Game hosted by Reilly Smith will take place at the new Las Vegas Ballpark® in Downtown Summerlin Saturday, June 15 at 7 p.m.  In a city known for over-the-top, one-of-a-kind events, fans will get the chance to watch their favorite stars in action as the teams “battle” it out for Las Vegas’ ultimate bragging rights, all for a good cause. The softball showdown will feature two all-star teams of professional athletes, celebrities, and media personalities, led by Reilly Smith of the Vegas Golden Knights and his teammates and Pro Football Hall of Famer Marcus Allen and friends from the Raiders. With hometown heroes playing on the field, fans can also expect special celebrity guest appearances in the game and around the ballpark throughout the night, including an appearance by members of the Las Vegas-based GRAMMY Award-winning band Imagine Dragons.

Full team rosters will be announced in the coming weeks and promise to feature some of Las Vegas’ favorite stars of the hockey rink, gridiron and stage. The Battle For Vegas Charity Softball Game will benefit local charities, including the Tyler Robinson Foundation (TRF), the nonprofit foundation of Imagine Dragons, which is dedicated to providing financial support to children and their families battling a pediatric cancer diagnosis.

“I’m proud to launch this event as this game provides the athletes of Las Vegas an opportunity to unite and raise funds for great causes,” said Reilly Smith of the Vegas Golden Knights. “We have the best fans in the NHL, and this is an opportunity for myself and my teammates to give back to the community that has been so good to us.”

Tickets for the Battle for Vegas Charity Softball Game go on-sale Thursday, May 2 at noon (12 p.m. PT). General ticket prices begin at $20. A limited number of elevated package experiences, including ballpark suites, are available. Pre-sale tickets for Las Vegas Ballpark® season ticketholders are available now. All tickets and packages can be purchased online at ticketmaster.com.

Following her incredibly stunning performance at the Billboard Music Awards and the announcement of her highly anticipated new album Madame X, available globally on June 14, Madonna, Live Nation and Maverick have announced a series of rare and intimate performances to take place exclusively in theaters, giving fans an opportunity to see Madonna in an environment like they never have before.

The Madame X Tour will make a Las Vegas stop at The Colosseum at Caesars Palace, with dates being announced soon.

Madonna is the best-selling female solo touring artist of all time and has the highest-grossing concert tour ever by a female artist with her Sticky & Sweet Tour (2008-2009) at $408 million.

Influenced creatively by living in Lisbon, Portugal over the past several years, Madame X is a collection of 15 new songs that celebrate Madonna’s career-long affair with Latin music and culture as well as other global influences.

Madonna is releasing five songs before her highly-anticipated new studio album Madame X debuts globally on June 14. Following the release of the empowering ballad “I Rise” and the critically-acclaimed “Medellín,” additional songs to be shared with fans include the infectious pop gem “Crave” featuring Swae Lee and produced by Mike Dean on May 10, the Jamaican dancehall vibes of “Future” featuring Quavo on May 17, as well as the sonically innovative “Dark Ballet” on June 7.

Madonna’s long-time promoter Arthur Fogel, President – Global Touring and Chairman – Global Music, Live Nation said: “The chance for fans to see Madonna at these venues is incredibly special. We are proud and excited to be able to deliver this ultimate opportunity for her fans.”

Las Vegas resident James Holzhauer (famed Jeopardy game show mega-winner) is giving back to his hometown community and to his favorite Museum. James and Melissa Holzhauer, members of the Las Vegas Natural History Museum and frequent visitors with their daughter, surprised the Museum with a $10,000 donation this week.

“We think the museum is an amazing resource for the Las Vegas community and we can’t wait to see how our donation helps it move forward,” said James Holzhauer

“We enjoy bringing our child to the museum and seeing her face light up when she sees the animal exhibits (oh those chicks last week!). I also appreciate that every time we visit, there is something new to do or see. It is not a very big place, but it has a lot of charm,” said Melissa Holzhauer.

“It was an honor to meet the Holzhauers, and to hear how much they enjoy our Museum and how many times they have returned to experience our programs again and again,” said Marilyn Gillespie, executive director of the Las Vegas Natural History Museum. “We are thankful for our Las Vegas residents that support our Museum and who actively participate in the growth of our programs with so much support. It’s because of amazing residents like the Holzhauers that we can manage our existing programs and add new and exciting elements year-round,” she said.

The Holzhauers directed their donation to support the Live Animal Department and the “Open Door Program” for at-risk students, allowing these students a chance to visit the Museum at no cost.

Well, gang, that’s about all the news for this week. See ya soon.