If Elon Musk is looking to expand the life of his special batteries, all he really needs to do is go to the Palazzo Hotel on the Las Vegas Strip, pay $42,00 plus some fees to see the real “Energy Bunny” perform on its re-designed theater stage. Yes, folks, Clint Holmes is doing his thing in a new show neatly titled “Between the Lines,” at 10:00 p.m. nightly except Sunday and Monday when he recharges his own battery.  I was informed that beginning next week (Tuesday Aug. 16) the show will move to a 9:30 p.m. time slot. Much better!

This particular show, assembled by Holmes with the help and suggestions from some of the great music people of Las Vegas, and other points east, west, south and north. It all began with the influences of his early days being raised in a house filled with music, his sense of feeling for the New York Theater, and his residence at the Smith Center Cabaret here in Vegas, where he created tributes to the greats every month.

“I wanted to bring every experience I’ve enjoyed over the years and bring them together to form a complete version of what I do now,” Holmes said following his performance last Tuesday. “I think I’ve succeeded with this show!”

Knowing Holmes, and after seeing this new creation, I agree with him. It’s a fast moving evening of fantastic music with a feeling that you are sitting in an intimate room filled with a few musicians, and a couple of singers. They are in this room because they love the creativity of making beautiful sounds. And, it is my opinion, that is exactly what “Between the Lines” means to me: Creation of great musical sounds presented in a comfortable surroundings. 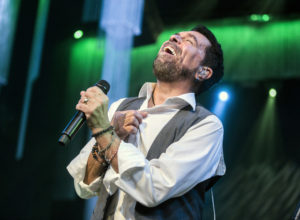 Some of the songs are originals from a couple of the Broadway type shows he built such as “Just Another Man,” with his buddy and former conductor, Bill Fayne, back in ‘90s. Others come from the back of his memory bank, which is what is also endearing to him in this venue: Clint explains “Why” a particular song means something to him, such as when he sings “At the Feet if Belafonte,” and the time the Man himself was in the audience. Or when he sings the beautiful Beatles love song, “When I Saw Her Standing There,” and he remarks that song reminds him of his first love.

I’ve been a huge fan of this guy since I first saw him perform as the opening act for Bill Cosby at the former Hilton Hotel on Paradise Road back in the ‘80s, and later for Don Rickles.  When Clint moved to our village in the late ‘80s and became a resident, he did so by giving of his time and talents to every benefit imaginable.  He paid his Las Vegas dues!

In the ‘90s he got a resident deal with Harrah’s on The Strip and his own named theater. Wow, that’s when Las Vegas fell in love with the man that doesn’t age! His voice over the years just continues to get richer and more vibrant with each day that passes.

But what makes this show work is not only Holmes, but it’s the band: six guys and a gal. And do they make music?  You bet!  Clint may have made the final decision as to who got the gig, but the man who put it all together is his musical director, Christian Tamburr, an internationally renowned vibraphonist, pianist, arranger and conductor.

A lot of reviews do not seem to pay much attention to the men and women who support the stars. Well this review is going to do just that. Clint Holmes is the star and deserves all the praise he gets. But I believe even he would agree “Let’s do this one for the band.”

Tamburr has been honored with many awards including “Outstanding Solo Jazz Performer” and “Critics Choice Top Rising Star” on the vibraphone by Downbeat Magazine. He was, until this gig, front running the Christian Tamburr Quintet, with whom he has played to sold out crowds at the Lincoln Center in New York City and the Kennedy Center in Washington, D.C. His recent album “Voyage” topped the jazz charts for two months.

Rocco Barbato (saxophone) has been named one of the “Top 10 Saxophonists” in the U.S. by BET on Jazz. Most recently he was performing in the “Donny and Marie Show,” and has played with Grover Washington Jr., The Rippingtons, and The Eagles. Rocco started his Las Vegas career at a little lounge inside the Palace Station Casino on Sahara Blvd. Rocco was soon in big demand and quickly moved to The Strip, being featured in numerous casinos with a four-year stint at the Bellagio, where he earned honors as the “Best Jazz Band” and “Lounge Performer of the Year.”

Noybel Gorgoy (vocalist and dancer) has traveled around the world expanding her musical horizons, which include countless Las Vegas stages. Born in Cuba to a well-known musical father, Gorgoy was destined for great musical feats. She co-wrote and recorded the singles, “I Am Going Home” and “Like the Ocean.”

Jakubu Griffin (drummer and percussionist) was most recently playing the drums for Cirque Du Soleil’s production of “Zarkana” in New York City, Griffin has established himself as one of the most versatile percussionists, having performed with many artists and bands that span over several genres, including Percy Sledge, Benny Golson, Carl Fontana, and Nicholas Payton. Griffin also performed on “Entertainment Tonight,” and opened for Jay Leno and Tower of Power. Griffin won an Indiana University concerto competition in 1992.

David Ostrem’s (bassist) impressive musical career includes performing with artists such as Danny Gottlieb, Vincent Herring, Rick Margitza, Brandon Fields, and Norbert Satchel. In 2015, Ostrem was the Musical Director of “For the Record: BAZ” at Mandalay Bay. Before that, David was the bassist and multi-instrumental performer for Spiegelworld’s “Vegas Nocturne.” Born in Boston, Ostrem studied with faculty from the acclaimed musical school Berklee College.  After graduating he joined Bryan Scary and The Shredding Tears with whom he recorded “Flight of The Knife” in 2008, “Mad Valentines” EP in 2009, and “Daffy’s Elixir” in 2012.

Jamie Hosmer (keyboard and vocal) has performed with many musicians across the U.S. and Europe. Most recently, Hosmer worked with Michael Cavanaugh, a GRAMMY and Tony nominated artist. Through this collaborations, Hosmer has been able to play with the Boston Pops and performed at the Kennedy Center with the National Symphony Orchestra. Jamie also played keyboards and sang with the 15-piece horn band, Santa Fe & The Fat City Horns, who has been deemed “one of the best bands in the world”. No stranger to a Clint Holmes stage, Hosmer performed with him for four years at Harrah’s Hotel and Casino.

Pablo Gadda (guitar) was born in Mendoza and raised in Buenos Aires, Argentina. He began studying classical guitar at age seven, and went on to earn degrees in Sound Engineering, Music with an emphasis in Jazz, and Orchestral Conduction in Buenos Aires National University of the Arts. Gadda was Musical Director for Royal Caribbean Cruise Lines for seven years. His recent credits include “Vegas the Show,” “Pin-up,” “Legends in Concert” and “MJ Live.” He also worked with Matt Goss and Kristen Hertzenberg, and toured with stars Martin Nievera and Lani Misalucha (featuring Journey’s singer Arnel Pineda).

Is it any wonder why this particular musical experience feels like a wonderful evening out in a small jazz room off the beaten path?  It is up close and very personal.  With such song selections like “Imagine” as the opening number, to a true jazz composition “At the Rendezvous,” to Holms tribute to his Mom and Dad “1944,” and combine the songs, “7 Years” and “Daughters” with a duet by Holmes and Gorgoy, culminating the evening with “Chasing Cars” and “Can’t Stop the Feeling.” You have just had a full night of music.

All I can tell you, gang, is this is a must see production if there ever was one. Holmes has earned our support! Let’s show him how much we appreciate what he has meant to our community. There is a local’s discount available now …the code is CHLOC30.

This past weekend, a mother Banded Bamboo Shark housed at the Las Vegas Natural History Museum’s Marine Life Gallery, laid 24 eggs to be hatched and raised at the Museum’s dedicated shark hatchery. Among the 24 eggs, three baby sharks have emerged and have been named Phelps, Miller and King – symbolic of the 2016 USA Olympic Swim Team members including Michael Phelps, Lilly King and local Vegas Olympian, Cody Miller.  The purpose of the Museum’s hatching program, and all parts of the Museum, is to educate the Southern Nevada community about the wonders of natural science. This rare and unique scientific occurrence offers guests an inside look into the biological development of sharks. The sharks will eventually go to the Shark Reef at Mandalay Bay to live permanently.  Once laid, the eggs are placed in the hatchery, located in the Marine Life Gallery. The hatchery is back-lit and the eggs are translucent making the development of the sharks something that can be observed and measured.  Admission to the Las Vegas Natural History Museum starts at $10 for adults. For more information on the other galleries at the Museum, visit Facebook, Twitter or www.lvnhm.org.

Well, gang, I hope you get out to see Clint Holmes.