Deana Martin, coming off a highly successful engagement at Caesars Palace in Atlantic City, will be returning to the South Point Hotel & Casino/Spa showroom on Saturday and Sunday, July 20-21. Deana is definitely one of the more influential American singers on stage today. And, not just because of being the proud daughter of iconic entertainer, Dean Martin, but because of the music she presents. Deana’s songs range from the Great American Songbook, to contemporary music, some of her own compositions, and of course, the music made famous by her dad, and his buddies.

Deana achieved success early in her career in films, theater and television, then quickly added to her repertoire – recording artist, best-selling author, nationally syndicated radio host, licensed pilot, and entrepreneur.  As an internationally acclaimed entertainer, hit recording artist, and an in-demand performer playing to sold-out audiences worldwide, Deana has become an instantly recognizable voice and figure in the pantheon of American singers.

Deana’s 2006 debut CD release, “Memories Are Made of This,” stayed in the top 10 for 40 consecutive weeks.  Another hit CD, ”Volare,” was released in 2009, and debuted on the Billboard charts at No.7, and the Jazz chart at No.22. “White Christmas” was another chart buster, released in 2011, and stayed on the top 10 chart throughout the entire Christmas season. Martin just wrapped up recording a totally new album last month, which will be available soon.

A celebrated author, Martin found herself on the New York Times coveted Best Seller list with her 2004 memoir, “Memories Are Made of This: Dean Martin Through His Daughter’s Eyes.”  In it, Deana delights in sharing wonderful, never-before-told stories about her father and his “Pallies.” To her they were known as, Uncle Frank (Sinatra) and Uncle Sammy (Davis, Jr.) – to the world, they were known as the Rat Pack.

Seeing Deana Martin in a live performance, you get the sense that there is nothing she cannot do.  At the South Point, Deana will perform one of her most requested shows, “Deana Sings Dino,” where she performs hits made famous by her illustrious father, including:  “Memories Are Made of This,” “That’s Amore,” and “Everybody Loves Somebody,” and many more. And there’s always that door on stage, where friends like to drop by and surprise her during a show. Like her Dad, Deana makes it all look so easy, and audiences can’t get enough.  Tickets, priced from $15 to $25, are now on sale at the South Point box office 702-797-8065. Show times are set at 7:30 p.m.

The 6th Annual Las Vegas Film Festival (LVFF) has created an inspired list of new works in cinema to showcase at this year’s festival, including feature films, compelling documentaries and creative shorts. Nevada student filmmakers get the platform to have their films screened in front of an audience with an incredible opportunity from the LVFF at College Screening Showcases on opening day. A collection of shorts, created by other talented Nevada filmmakers, get a showcase on Sunday, beginning at 1:10 p.m. The four-day festival runs July 18 – 21 at the LVH – Las Vegas Hotel. A full schedule is available at www.lvfilmfest.com. 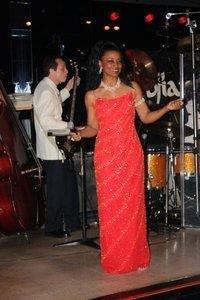 In addition to film screenings, LVFF hosts multiple premiere parties, cocktail mixers, dinners, red carpets, VIP parties, interactive and specialty panels, a screenplay competition, and a closing night award reception, over the course of the four-day event. Attendance is encouraged for The Emerging Filmmakers Scholarship Dinner. It is a chance to celebrate new voices in cinema and the Las Vegas Film Festival’s opportunity to facilitate future projects through scholarships. At 7:30 p.m. on Thursday, July 18, a special three course, pre-fixe gourmet dinner will be served, with a liquor, beer, wine and champagne open bar at Piero’s Italian Cuisine, a quintessential Vegas hot-spot, for $100 per person. All tickets sold benefit the Las Vegas Film Festival Scholarship Fund. Tickets for individual screenings at the festival start at $10. Tickets and passes are available at www.2013lasvegasfilmfestival.eventbrite.com. Visit www.lvfilmfest.com for special discounts for students, seniors and Las Vegans.

Two of this writers’ favorite entertainers, Mark Giovi and Genevieve, along with their musical director, Bill Fayne, took over the stage for a very special dinner show at the Italian American Club, 2333 E. Sahara Blvd., on Sunday, June 30th. All, I can tell you, is with these three up on that stage, singing and playing music, you were there had to be absolutely royally entertained. I’m was planning on being there for both the dinner and the show, but unfortunately for me, I came down with a stupid summer cold. And, believe me, there is nothing worse than a stubborn summer cold!

The Strip at Las Vegas Motor Speedway will hosted a Mopar Midnight Mayhem, last Friday, June 28. Now in its 12th year, MOPAR Midnight Mayhem is The Strip at LVMS’s safe alternative to illegal street racing. The speedway staff encourages enthusiasts to race each other on the safer confines of its NHRA-sanctioned, quarter-mile drag strip. MOPAR Midnight Mayhem is open to any street-legal vehicle and any licensed driver. Entry fee is $15 to race or ride along, and $5 admission for spectators. Restricted-area passes also are available for $15. For more information regarding the next, please call The Strip at LVMS at 702-632-8213 or visit www.LVMS.com.

[textadmed] After months of construction, owner Kathy Hussey has opened her first retail store, Las Vegas Fruits & Nuts outside of McCarran International Airport, and celebrated the official grand opening Wednesday, June 26, with a ribbon cutting. The new Las Vegas Fruits & Nuts retail outlet, located next to Fed Ex, 5775 S. Eastern Avenue, Suite 104, features fresh nuts, dried fruits, freshly made cream and butter fudge, gourmet apples, flavored popcorn, snacks, and logo merchandise with the company’s mascot Lucky P. Nutt. Visitors and customers will also have the advantage of being able to watch fudge, candied apples and flavored popcorn being made on the premises in the open display kitchen. Another means for purchasing the wide array of products offered is through the online store at www.lasvegasfruitsandnuts.com or by phoning 702-743-7147.