Deana Martin fans will love this special show honoring her father, the “King of Cool” Dean Martin on the anniversary of his 100th birthday. Martin will be performing two spectacular shows as part of her acclaimed ‘Deana Sings Dino’ concert series, with special guests, The Golddiggers and … who knows who will walk through the “Surprise Guest Door.”  Show dates are June 23rd and June 24th in the Showroom at South Point Casino, with show times set for 7:30 p.m.

The two shows will precede the “Deana Martin Celebrity Roast,” to be held on June 26th also at the South Point Casino. The “Man of the Hour” will be Las Vegas’s own Dennis Bono, singer, entertainer, and host of “The Dennis Bono Show,” with proceeds benefiting Opportunity Village. 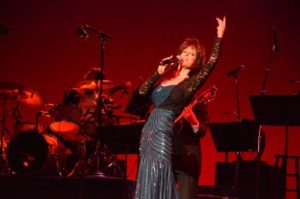 From the moment she walks on stage, Deana takes her audience on a musical journey with her non-stop dynamic energy celebrating her legendary father, and other great performers who shaped American music and popular culture for over four decades. “Deana Sings Dino” is a totally engaging, classy and contemporary presentation of the most beloved songs of all time, capturing the swinging sophistication associated with her Dad and the Rat Pack. In this electrifying musical revue, Deana sings hot new arrangements of enduring hits like, That’s Amore, Volare, That’s Life, Everybody Loves Somebody, Memories Are Made of This – songs treasured worldwide by her fans and those of, “Uncle Frank” Sinatra, and “Uncle Sammy” Davis Jr. 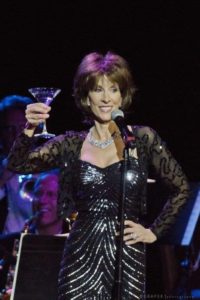 These special shows have all the essentials of classic concert entertainment: the world’s best music, personal and often hilarious recollections from Deana’s life and career, interaction with her audience, plus her innate musicianship. Deana Martin is undeniably authentic­­­ – a living connection to the greatest era in entertainment. As an internationally acclaimed entertainer, Deana Martin has become an instantly recognizable voice and figure in the pantheon of The Great American Songbook. Her 2006 debut CD release, Memories Are Made of This, stayed in the top ten for 40 consecutive weeks.  Her follow-up CD, 2009’s, Volare, debuted in the top ten of the Billboard charts, followed by 2011’s seasonal evergreen, White Christmas, 2013’s critically acclaimed, Destination Moon, and her latest, 2016’s Swing Street, has garnered airplay on top Jazz, Standards, and Country radio stations, emphasizing her prominent status as a hit recording artist. As a celebrated author, Deana found herself on the New York Times coveted Best Seller list with her 2004 memoir, “Memories Are Made of This: Dean Martin Through His Daughters Eyes.”  In it, Deana delights in sharing wonderful, never-before-told stories about her father and his Pallies. To her they were known as, Uncle Frank (Sinatra) and Uncle Sammy (Davis, Jr) – to the world, they were known as the Rat Pack.

Australian entertainer Greg Bonham returns to Las Vegas and the stage at the Cabaret Jazz room inside The Smith Center on Saturday, June 10 at 7 p.m. with “G’Day Las Vegas.” As his third return to the entertainment capital of the world, Bonham will capture audiences with his soulful voice and sizzling trumpet skills, performing songs from Maynard Ferguson, U2 and Eric Clapton, with classic hits including “Hallelujah” alongside Bonham’s emotionally charged original songs. Accompanied by his eight-piece superstar band, and award-winning pianist, Ryan Ahern, who will open the show and perform renditions of famous tunes by Jerry Lee Lewis, Boogie-Woogie, Queen, and Ray Charles.

Before America came calling, Bonham was a farm boy from Australia who rose to fame from Australian and UK television appearances, and selling more than 14 million records in Russia. He now performs across the United States and is excited to return to The Smith Center in Las Vegas. “This year’s show will have a new format and will feature many styles of music,” said Bonham. “Get ready for the ride of your life Las Vegas, Ryan and I are ready to leave it all on the stage.”

Las Vegas artist Lena Prima will bring her musical celebration “Old Vegas and New Orleans!” to Suncoast Showroom on Saturday, July 8.  The youngest daughter of musical legend Louis Prima and famous singer-songwriter Gia Maione, Lena Prima began her musical career performing on stage as she toured with her parents during her summer vacations. After completing her studies in art, music and dance at the University of Nevada, Las Vegas, Prima went on to her own successful musical career.

Prima showcased “Louis Prima, That’s My Dad!” in 2000 at the Sahara Hotel and Casino, where her father performed during the early 1950s. Throughout her more than 30-year career, Prima has released five albums, including “Since the Storm,” “Pennies From Heaven,” and “Starting Something.” The vocalist has also performed more than 3,000 shows across the United States. Prima’s talent has been recognized by many fans, including Baton Rouge, La. Mayor Melvin “Kip” Holden, who proclaimed July 23 as “Lena Prima Day.” The artist’s efforts to advocate for Italian-American causes have also led to invitations to perform at the prestigious National Italian-American Foundation gala and headline at more than 50 Italian-American festivals around the country.

Audiences will be taken back to Prima’s musical roots in her show “Old Vegas & New Orleans!,” featuring Prima’s greatest songs and ballads; jazz and New Orleans classics; and her father’s timeless hits.  Showtime is 8:30 p.m. Tickets start at $15 plus taxes and fees, and can be purchased by calling Ticketmaster at 800.745.3000; online at www.suncoastcasino.com; or in-person at Suncoast, The Orleans, Gold Coast, and Sam’s Town. Tickets may also be purchased the day of the show (depending upon availability) at the venue box office. 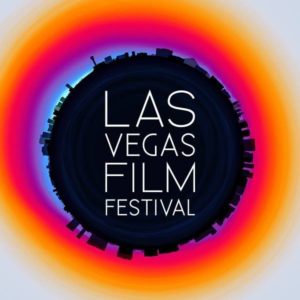 The 10th Annual Las Vegas Film Festival announced today the initial programming lineup for the 2017 Festival, to be held entirely at Brenden Theatres and the Palms Casino Resort June 6 – 11. This year’s Festival lineup includes a mix of feature films and documentaries that have been favorites on the international festival circuit, animated works, shorts, music videos, festival labs and local films that were produced in Southern Nevada or were directed by a local filmmaker.

Highlights include winner of the NEXT Audience Award at this year’s Sundance Film Festival, Gook, directed by Justin Chon; SXSW standouts California Dreams from Mike Ott and Theo Anthony’s Rat Race; and Dave Made a Maze from director Bill Watterson.

All feature and documentary films will be followed by a Q&A session with the cast and crew, providing theater goers with a unique movie watching experience. Here are just a few of those featured during the festival.

10 Days, Director: Nathaniel Katzman: Estlin and Ellie reconnect on Christmas Eve after nine months of separation. However, they are both wary of jumping right back into a relationship and therefore propose a challenge: they must spend 10 days with each other before a decision can be made. The film is about relationships, the holidays and being young in New York. There’s plenty to laugh, cry, and pull your hair out about.

The 60 Yard Line, Director: Leif Gantvoort: Based on a true story. Set during the 2009 football season. Ben “Zagger” Zagowski and Nick “Polano” Polano, best friends and co-workers, buy a house in the parking lot of Lambeau Field (home of the Packers), and are forced to pick between a football fan lifestyle and a girl. Lives change. There’s a cow.

Dave Made a Maze, Director: Bill Watterson: Dave, an artist who has yet to complete anything significant in his career, builds a fort in his living room out of pure frustration, only to wind up trapped by the fantastical pitfalls, booby traps, and critters of his own creation. Ignoring his warnings, Dave’s girlfriend Annie leads a band of oddball explorers on a rescue mission. Once inside, they find themselves trapped in an ever-changing supernatural world, threatened by booby traps, and pursued by a bloodthirsty Minotaur.

Gook, Director: Justin Chon: Eli and Daniel, two Korean American brothers, own a struggling shoe store and have an unlikely friendship with Kamilla, a street-wise 11-year-old African American girl. Kamilla ditches school, Eli stresses about the store, and Daniel tries to have a good time. It’s just another typical day at the store until the Rodney King verdict is read and riots break. With the chaos moving towards them, the trio is forced to defend the store while contemplating the future of their own personal dreams and the true meaning of family.

Still/Born, Director: Brandon Christensen: Still/Born follows Mary, a new mother who lost one of her twins in childbirth. As she struggles with the loss of one of her children, she starts to suspect something sinister.

Geezo, there’s a lot going on this week. I’ll be there for my friend Greg when he hits those first notes on that gold trumpet. This is talent my friends. If you haven’t had the pleasure of sitting and listening to this talented Australian, then do yourself a favor and take a few hours this weekend.