Don Gavin, Boston’s “Godfather of Comedy”, is headlining this week at the Laugh Factory, located on the mezzanine level of The Tropicana Las Vegas.  Gavin is sharing the stage with two veterans of Comedy, Flip Shultz and Dave Russo.

Gavin has performed in 25 different countries, at over 150 colleges, and more than 200 corporate functions in the past three years. Robin Williams, Denis Leary, Martin Sheen and Sandra Bullock are just a few of the performers with whom Don has worked. One of the fastest and funniest comedians working today, Gavin has delighted crowds with his unique brand of comedy throughout the United States, Canada, the Caribbean, Australia, and on comedy tours to Germany, Sicily, and Japan.

Don has starred in several of the world’s most prominent comedy festivals, including The Montreal “Just For Laughs” Comedy Festival. He also made a splash on CBS’ “Late Show with David Letterman.” Other TV appearances include NESN Comedy All-Stars and An Evening At The Improv. Don’s breakneck-speed approach to humor generates consistently sustained laughter. Australia Network TV says, “No one-absolutely no one does to an audience what this performer does. It was an hour of brilliance. Side-holding laughter throughout-Gavin has to be seen in person to be believed.” Gavin’s universal humor and “everyman” style has an immediate appeal to all ages and audiences.

Flip Schultz high-energy performances earned him wins at the West Palm Beach HBO Comedy Showcase, slots in the Latino Laugh Festival and Loco Comedy Jam, a role in the film Big Trouble and an appearance on the game show National Lampoon’s Funny Money. Schultz has also opened for the late George Carlin, who said of Schultz, “He’s like an ostrich on PCP!”

Since the wee age of eight, Schultz knew he was going to be a comedian. It was at this age that he won a talent show for doing stand-up. It wasn’t until 18 that Flip braved a ‘real’ comedy stage (which doubled as a bar) and won the open mic contest. For the next two years he annoyed club owners and got as much stage time as possible. It paid off when he started making money…both he AND his parents were very happy about that!

Dave Russo was recently named “Best Male Comic” in Boston by the Boston Examiner. Russo has been a mainstay of Boston comedy for the last fifteen years. As co-host of NESN’s Dirty Water TV, he produces a regular comedy series, in addition to reporting on the best of Boston night life. He has appeared on The E! TV series “The Entertainer”,  NBC’s “The Today Show,” FOX 25 with Gene Lavanchy, “The Phantom Gourmet,” and was hand selected by the producer of NBC’s “Last Comic Standing” to perform on NESN’s Comedy All-Stars.

The monumental Stardust letters—one of The Neon Museum’s most iconic Neon Boneyard sign exhibits—have been re-lamped and are now illuminated daily. These letters join the growing number of restored and illuminated Las Vegas neon signs on display in the Boneyard.

To re-lamp the eight letters, which range in height from 14 to 18-feet, Hartlauer Signs used more than 1,100 energy-efficient, 3-watt cold cathode compact fluorescent (CCFL) bulbs. Their original location on the building and the year they were put on is currently unknown. The sign originally used 25-watt incandescent bulbs. In the course of this partial restoration, Hartlauer Signs found flashers, electrical devices enabling the oscillating effect associated with bulb-bed signs. Now, visitors to the Boneyard can see the Stardust illuminated just how it appeared when it last functioned on the Las Vegas Strip.

Founded in 1996, the Neon Museum is a non-profit 501(c)3 organization dedicated to collecting, preserving, studying, and exhibiting iconic Las Vegas signs for educational, historic, arts, and cultural enrichment. It has been named “Best Museum” by Las Vegas Weekly, one of “Sin City’s Best Retro Sites” by MSN, “No. 1 Las Vegas Museum Sure to Entertain and Educate” by USA Today’s 10best.com, “One of the Top 10 Coolest Things You Didn’t Know You Could Do” by Forbes.com, and one of the “Top 10 Historic Spots in Las Vegas” by Vegas.com, among many accolades received over the years.

On its 2.27-acre campus, the Neon Museum houses an outdoor exhibition space known as the Neon Boneyard (“boneyard” is traditionally the name for an area where items no longer in use are stored); the North Gallery, home to the nighttime augmented-reality, audiovisual spectacle, “Brilliant!”; the Boulevard Gallery outdoor exhibit and event space; and its visitors’ center, housed inside the former La Concha Motel lobby.

Rick Harrison, owner of Pawn Plaza, announced the newest tenant at Pawn Plaza as BLVD Coffee and they are open daily at 8:00 a.m. The new Pawn Plaza tenant will join Good Pie, Rick’s Rollin Smoke BBQ & Tavern, Chumlee’s Candy on the Blvd., Chapels at the Pawn, Highway Radio, Pawn Plaza Visitors Center, Master Barbering Galo Shop and Elite Motorsports to round out the dining and shopping opportunities across the parking lot from the World Famous Gold & Silver Pawn Shop.

“I am excited to have an amazing and diverse group of tenants at Pawn Plaza and to be fully leased.  It doesn’t get any more Vegas than the Carter family who will operate BLVD Coffee and we welcome them and know they will be very successful with us,” said proprietor and bartender (on select Friday and Saturday nights at his own Rick’s Rollin Smoke BBQ & Tavern) Rick Harrison. 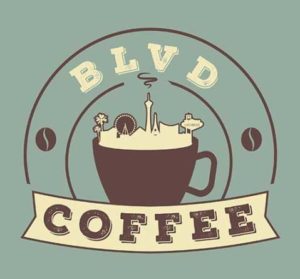 The Carter family are Vegas basketball tradition and have called Las Vegas home for over a quarter century.  It couldn’t be any more appropriate for their BLVD Coffee to open in March with basketball tournaments all over the city and March Madness days away.  Dad “Big Mike” coaches at Bishop Gorman and has for more than two decades.  Younger son Ben is a professional basketball player overseas and mom Hadar, a former Israeli Army Lieutenant, is the heart of the family and the coffee operation.  Oldest son Tim will oversee operations after playing collegiate basketball.  The family has always bonded over coffee and thus BLVD Coffee was born.  “BLVD Coffee will support local businesses and to that end our coffee will come from Boulder City’s Colorado River Coffee Roasters,” said Tim Carter.  He added, “We hope to become known for exceptional customer service and great coffee as well as top notch grab-n-go snacks and pastries.”

BLVD Coffee recognizes a dream come true for young Tim (in his mid-20’s) as he has always wanted to open his own business and be an entrepreneur.  Always supporters of the Las Vegas community, BLVD Coffee will offer discounts for senior citizens and veterans. The coffee shop will be open at 8 AM every morning and until the early evening. Pawn Plaza is located at 725 Las Vegas Boulevard South.

The Mob Museum, The National Museum of Organized Crime and Law Enforcement, will host a one-day-only St. Patrick’s Day programs and offers in the Museum’s Oscar B. Goodman Room on the third floor and The Underground speakeasy on Tuesday, March 17.

From 2:00 to 3:00 p.m. and again from 4:00 to 5:00 p.m., The Mob Museum’s Senior Director of Content Geoff Schumacher and Educational Programs Manager Claire White will deliver a presentation: “The Irish Mob in Prohibition-era Chicago.” Among topics to be discussed will be the Irish American-dominated North Side Gang, which served as the main rival of the Italian American organized crime group led by Johnny Torrio and Al Capone, eventually known as the Chicago Outfit.

Meanwhile, in The Underground speakeasy and distillery, festive specials available in honor of St. Patrick’s Day will include: $10 Guinness with a shot of Irish Whiskey; $8 Irish Coffees; $5 green Ginger Jake shots, made with ginger-infused, house-made moonshine  and $5 green beer (also available at Museum concessions on upper floors).

All Museum presentations require registration. For more information and to register, visit www.themobmuseum.org/events/ or call (702) 229-2734. 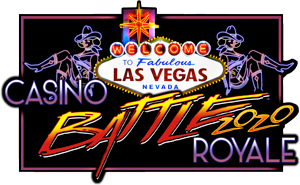 The Core Arena at the Plaza Hotel & Casino is proud to again host the Casino Battle Royale Demolition Derby produced by Stirrin Dirt Racing, the largest demolition derby promoter in the west, March 26-28. The family-friendly event debuted at the Core Arena in March 2019. This year, it will expand to three days of smashing fun featuring a variety of mini-car, iron-truck, and farm-truck heats. The events will begin at 4:00 p.m. on Thursday, March 26 and Friday, March 27, and at 3:00 p.m. on Saturday, March 28, with doors opening one-hour prior.

Available online, a single day ticket is $45, and a three-day event ticket is $135. Discounted tickets with a hotel stay are also available. While supplies last and only available at the Plaza Box Office, locals can save $15 on their single-day tickets by showing their Nevada ID. All ticket prices are plus taxes and fees. 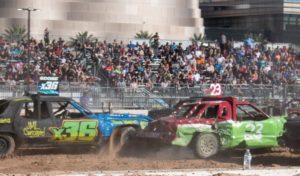 On Saturday, March 28 at 7:00 p.m., a free After Party will be held under the Plaza’s iconic dome. All ages are welcome to the party that will offer music, drink specials, and wrestling presented by Snake Pit Pro Wrestling Academy. Las Vegas showgirls will also be on hand to present the awards to the demolition derby winners at 10:00 p.m. and available for photo opportunities with guests.

“Demolition derbies produced by Stirrin Dirt Racing at the Core Arena have been immensely popular, selling out each time,” said Jonathan Jossel, Plaza Hotel & Casino CEO. “It’s fun for all ages and brings more people to downtown Las Vegas. We are proud that unique events like demolition derbies have found a home at the Plaza’s Core Arena.