Great American Songbook Entertainer, Elijah Rock is a new resident to our village of Las Vegas. I first spotted this talented young man when I dropped by to say hello to Dennis Bono at the South Point Hotel & Casino, during the taping of his weekly variety show.  I was really impressed and, yes, I will be attending Elijah’ show this Friday, Nov.16 at the Italian American Club. It’s great to have a new voice to listen to in our little village.

Remember Casablanca? Remember songs woven with romance and rhythm and… magic? The remarkable Elijah Rock, who also tap dances in his show, delivers those timeless songs with an ease that may remind you of the great “crooners” like Billy Eckstine, Sammy Davis, Jr., and Nat King Cole.  You can also toss in the greatest “crooner” of all time, Bing Crosby to this list.

Think classic Las Vegas, stiletto heels and secrets shared over cocktails. There will be just one performance at 8:00 p.m. with tickets priced at $25.00, first-come-first-seated.  You will listen to such unforgettable songs like “Our Love is Here to Stay,” “Bewitched, Bothered and Bewildered,” and the classical hit “Nessun Dorma” by this award-winning entertainer.

The live band, under the direction of  Uli Geissendoerfer on piano, consists of Bob Sachs on Bass, Jakubu Griffin on Drums, and Jake Langley on Guitar. Elijah’s special guest will be Donny Most, best remembered at Ralph Malph from the hit T.V. show “Happy Days,” who is not only an outstanding actor, but who knew he was also an accomplished singer.  in his own right. 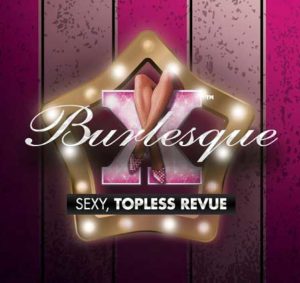 X Burlesque has done it again: The Strip’s steamiest show has been named the 2018 Gold Winner for “Best Female Revue” by Las Vegas Review-Journal readers for the third year in a row. The long-running show, produced by Matt and Angela Stabile, performs inside Bugsy’s Cabaret at Flamingo Las Vegas. X Burlesque has performed in Las Vegas for more than 16 years, during which it has racked up some impressive numbers.

X Burlesque has performed more than 6,100 shows since it opened at The Aladdin (now blown up) in 2002. Since then, the show’s stunning ladies have worn more than 34,272 pairs of eyelashes onstage and have gone through more than 8,568 tubes of Christian Louboutin Red lipstick, giving each dancer the signature sultry look for which the cast is known. More than 50,000 rhinestones have also been used to adorn the dancers’ shoes and boots alone.

Critical acclaim for X Burlesque has abounded with Angela Stabile named one of the “Dynamic Women of Las Vegas” by VEGAS magazine, which also featured Matt Stabile as a “Modern Man” in its men’s fashion issue. Las Vegas Magazine recently proclaimed the husband and wife duo “adult revue kingpins,” adding yet another accolade to their impressive collection.  The show has also been named “Sexiest Show in Vegas” by Travel Channel, “The Hottest Show on the Strip” by CNBC and “The Sexiest Show in Las Vegas” by What’s On, in addition to being named one of “The 12 Sexiest Jobs in Las Vegas” by E! News.

Provocative, daring and scintillating, X Burlesque brings adult fantasies to the stage in a bubbly production show led by a troupe of gorgeous dancers. Running as the city’s hottest topless revue for more than 16 years, X Burlesque beauties bare their assets all while playfully interacting with the audience. With bits set to music by hot contemporary artists, numbers range from frisky to X-rated, hence the show’s seductive name. 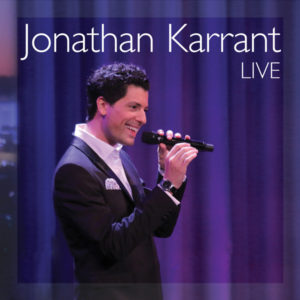 Jonathan Karrant’s new album, “Jonathan Karrant Live,” was recorded in Las Vegas at one of the top 10 performing art centers in the world; The Smith Center. The new record is a collection of standards from iconic favorites to obscure tunes that evoke the emotion of Jonathan’s soul and style. A couple of the music selected to be in the album includes: “Nature Boy”, “Love For Sale,” and “Night Life”  The new album has shot to #2 on the iTunes Jazz charts.

And this Saturday, Nov. 17, the very talented songster will host an Album Release Party beginning at 7:30 p.m. inside the Red Rock hotel/casino.  His playful yet thoughtful vocal interpretation leaves a unique imprint on each musical piece he touches. This 15-track record is brought to life with Saxophonist Charles McNeal, Pianist Jason Corpus, Bassist David Ostrem, and Drummer Paul Ringenbach.

Jonathan’s album, “On and On” hit #4 on the Billboard Jazz charts. He has received honors throughout the states including; the New York City Jazz Cabaret Honors, “Best Singer” for the Bravo California Awards and was named one of the top 12 rising jazz vocalists by Downbeat Magazine. Don’t miss this event.

The 40,000+-square-foot gentlemen’s club features hundreds of gorgeous female entertainers, stages in every room, and a main room framing an enormous dance platform and lush VIP rooms. Celebrities such as Carmen Electra, Snoop Dogg and Joanna Krupa have hosted or partied at Crazy Horse 3, plus it has become the go-to late-night spot for DJs like David Guetta, Skrillex, Lil Jon and more. More information about Crazy Horse 3 is on the website at www.crazyhorse3.com.

Karma And Luck (Karmaandluck.com) a Las Vegas-based modern spiritual lifestyles brand – designed to unify cultures, celebrate diversity, and introduce the West to the beautiful spiritual customs of the Middle East and Far East through jewelry and home décor, have launched its new wellness Yoga Mats on sale at its Fashion Show Las Vegas location. In addition, Yoga Mats can be purchased at www.karmaandluck.com

According to the Yogic Encyclopedia, Yoga literally means – union.  “This union can be understood on different levels: philosophically, as that of the relative, limited self with the absolute Self; religiously, as that of the individual soul with the Infinite Spirit; psychologically, as the integration of the personality – a state wherein a person no longer lives at cross-purposes with himself; emotionally, as the stilling of the waves of likes and dislikes, permitting one to remain in all circumstances complete in himself.”

“We developed our signature line of yoga mats because it belonged in the Karma And Luck family of merchandise – creating a comfortable eco-friendly platform to enlighten your soul through the art and manifestation of Yoga,” said Vladi Bergman, CEO/Founder, Karma And Luck.  “We infused signature icons of the world and spiritual symbols to further create an environment of elevation and wellness,” he said.

Karma And Luck offers an array of deluxe yoga mats in vibrant and muted colors, each themed with symbols that represent communication, concepts, and mysticism. Our mats measure 70” by 24” and come with a matching logo yoga bag with icons as Om, Hamas, Tree of Life, Floral, and Pink Lotus to name a few. Our Yoga Mats are thick, and comfortable, and each is blessed in our signature Crystal Quartz Singing Bowl before we send them home with our customers, each blessing becomes part of each Yoga experience.  Each Yoga mat is $59.00 and is accompanied with a Karma And Luck cover to protect the investment.

Karma And Luck connects fashion, jewelry and exquisite home décor with meaning and purpose. The message of “uniting cultures” has been present since the brand’s inception under the direction of its founder. who has traveled the world seeking customs, rituals, and spiritual unity in vast regions for the purpose of bringing these items to the West. Bergman created this Yoga Mat line to continue to educate the world about mind, body, and soul through exercise of the mind and body.

Well, gang, you have a few choices this week to be entertained. Hope you make it off the couch and enjoy some of our local talent.