Ol’ Blue Eyes will sparkle on the Las Vegas Strip again as “FRANK –The Man. The Music.” makes its debut at The Palazzo® Las Vegas. Honoring the life and music of Frank Sinatra, the show, starring Bob Anderson and featuring a 32-piece orchestra under the musical direction of Vincent Falcone, who was The Man’s conductor for 10 years, will open at The Palazzo Theatre, Saturday, Jan. 24, 2015. Tickets are now on sale.

This writer has known Anderson for more years than I actually want to count. And over those years I have watched his career ebb and flow as he continued to climb the ladder of stardom, and when I saw this particular show a few months ago, a one-night special, I knew it was a winner. And now it’s back, with all the little tweaks needed to make it a wonderful project he can be extremely proud of.  It also has a magical $100,000 stage set-up that will “blow your mind,” Bob told me over the phone.

Conceptualized and brought to life by an all-star creative team, “FRANK – The Man. The Music.” is produced by Hoboken Productions in association with Stephen Eich. Anderson, a revered singing impressionist, is transformed into Sinatra with the help of Oscar®-nominated makeup artist Kazu Tsuji, who aged Brad Pitt in the movie “The Curious Case of Benjamin Button.” And, as I wrote previously, it is unbelievable to see my friend, Francis Albert, on a stage once again. By that I mean, the transformation is perfect. The little mannerisms Sinatra had, the mystic he carried on stage, and the charisma of the “Great Crooner” is all there! And, the musical arrangement, many of them by Vince Falcone, are so beautiful you’ll just never want the show to ever get to its final number. Believe me, you will leave the showroom wanting to come back. It’s just that great!

Taking audiences on a musical journey through the legendary crooner’s timeless hits, “FRANK – The Man. The Music.” highlights three distinct areas of his career: the recording studio, television specials, and personal appearances. The authentic concert recreation marks a return to the era of Las Vegas glitz and glamour that the singer made famous.

“This show will give generations of music lovers around the world a chance to leave this high-tech world behind and travel back to a time circa 1970, to experience an evening unlike any other today,” John Caparella, president & COO of The Venetian, The Palazzo, and Sands Expo, said. “For those who yearn for a sophisticated music experience at the site where the Rat Pack earned its fame, this is the show to attend.”

The 90-minute production opens at The Palazzo Theatre in the year that celebrates the 100th anniversary of Sinatra’s birth. Paying homage to Sinatra by recreating him in sound and likeness, Bob performs hits from The Great American Songbook, including, “Come Fly with Me,” “One for my Baby,” and “My Heart Stood Still,” and of course, “My Way,” among many others. Over all Bob will perform more than 20 of Sinatra’s greatest hits, and even a few not so well known songs which “The Chairman of the Board,” liked on a personal basis.

“Playing this iconic legend is a humbling and monumental experience,” Anderson said. “I want everything to be as close to reality as possible. The size and quality of the orchestra, the original arrangements, the set, the sound, the lighting, and everything else has to be exquisite.”

A Las Vegas legend in his own right, Anderson moved to Las Vegas from Detroit at the age of 22 and got his start performing with Nancy Sinatra as a singer in her show at the Sahara Hotel and Casino. When Sinatra took him with her for a performance on the “The Merv Griffin Show,” Griffin discovered his ability to recreate the voices of others, a skill that made him a regular on nearly every talk and variety show in the country. Anderson went on to have his own showroom in Las Vegas for more than a decade and in 2002 was inducted into, “The Casino Legends Hall of Fame.”

“FRANK – The Man. The Music.” performs Tuesdays, Wednesdays, Thursdays, and Saturdays at 8 p.m., and Fridays at 9 p.m. at The Palazzo Theatre starting Saturday, Jan. 24, 2015. Tickets are now on sale. For up-to-date schedule information, including dark dates, or to purchase tickets, visit any Box Office at The Venetian or The Palazzo, go online at www.venetian.com/frank, or call (702) 414-9000.

Jamie Lissow will be headlining the Laugh Factory at the New Tropicana Resort on the Las Vegas Strip alongside, Francisco Ramos, and host, Jay Reid, beginning Monday, Jan. 19 through Sunday, Jan.25, with show times at 8:30 and 10:30 p.m.

Lissow is a native of Rochester, NY, where he graduated from Fredonia State with a degree in mathematics and psychology. Jamie decided to abandon his plan of becoming a lawyer, and instead entered the world of stand-up comedy. He began turning heads right away. After touring the club circuit for a couple of years, Jamie was invited to audition for the prestigious Montreal Comedy Festival. The “Just for Laughs” festival, as it is sometimes referred to, is a unique chance to showcase in front of everyone in the industry all at once in the drooled, toiled and sought after, “New Faces,” category, where for six minutes you could change the direction of your career for better, or for worse. Jamie earned himself a spot in the festival. Following his appearance at the Festival, he has climbed the comedy ladder and appears constantly in all the top comedy clubs across the nation.

Jamie has made appearances on “The Late Late Show with Craig Kilborn,” NBC’s “Late Friday,” “The Tonight Show with Jay Leno,” Comedy Central’s “Premium Blend” and is a proud “Star Search” loser.  He can also be seen recurring on Fox News Channel’s “Red Eye.” He has been called “The best writer since Seinfeld” and “Adam Sandler without the guitar.” Now, tackling such hot-button topics as sorcery, rude ventriloquists, mistreating terrible cover bands, and how much it would suck to be a magician, Jamie kills the crowd for his entire set with a combination of stunningly brilliant jokes, and absolutely perfect delivery.

Francisco Ramos’s TV credits include the new pilot “Tribeca,” that was directed by Steve Carell, the Byron Allen syndicated show “The First Family,” and “Jimmy Kimmel Live.” He has created memorable characters in animation as the voice of Marmoset in the movie “Rio,” as well as a voice for the film “Marmaduke.” Ramos continues to tour worldwide as a stand-up comic, including a one-month stop in Afghanistan to perform for U.S. troops.

Since age 19, Las Vegas native Jay Reid has been entertaining audiences in small clubs throughout his hometown, and has since appeared in comedy venues from Los Angeles to Iraq. Reid’s first big break came when he was chosen to be a contestant on BET’s “Coming to the Stage” comedy competition, where he went head-to-head in a weekly comedic battle against other rising comedians. The popular funnyman was featured in the blockbuster movie “21” starring Kevin Spacey. He recently appeared on Showtime’s highly anticipated comedy special “Bill Bellamy’s Ladies Night Out Comedy Tour” and currently travels the country with Bill Bellamy on the hot-ticket tour. 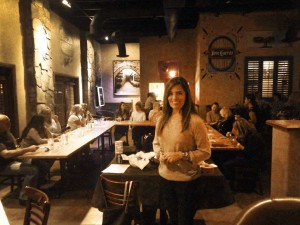 Natasha Williams owns the Jalisco Cantina, 3460 E. Sunset (Sunset and Pecos), where I like to go to get my fix on a great enchilada, and a fantastic Margarita. I make the short trip about twice a month. Well, Natasha sent me an invite to her third wine paring event at the Cantina, and I thought you, my readers, should know about it.

The featured wine is Kendall Jackson (my favorite Chardonnay) and it will be paired with, #1 Salmon; #2 Carne Asada with asparagus topped with a Béarnaise sauce; #3 roasted park with a basil spicy sauce; #4 grilled chicken with cilantro;#5 shrimp and octopus sauté; and #6 short ribs topped in a chorizo and black bean soup. A Kendall Jackson sommelier will be on hand to discuss all six wines: Pinot Gris; Sauvignon Blanc; Pinot Noir; Summation and a Cabernet Sauvignon. Williams tells me that the portions are substantial and she promises, “That no one leaves hungry!” The event kicks off at 6:00 p.m. and ends at around 8: 00 p.m. At the end of the event you can purchase any of the featured wines at her cost. I strongly suggest that you call and make a reservation as she has sold out each time. The nice part is that it only cost $25.00, so do yourself a favor and call 702-436-5200 before you get left out.

Well, gang, that’s about it for this column.