The Venetian Las Vegas and GOMM Productions LLC, have partnered to bring a special engagement – GEORGIA ON MY MIND: Celebrating the Music of Ray Charles – to The Venetian Theatre this fall. This groundbreaking new show will feature a host of esteemed stars including Emmy award-winner Clint Holmes, 10-time Grammy award-winning vocal group TAKE 6, six-time Grammy nominee and DownBeat Vocalist of the Year Nnenna Freelon, and Stella Gospel Award and Grammy award-winning saxophone star Kirk Whalum. The show also introduces the Las Vegas Mass Choir, under the direction of James R. Smith and Edie Aikels, and features the Las Vegas All-Star Big Band, under the direction of pianist and conductor, David Loeb. This dynamic ensemble of all-star performers will celebrate the genius of American music, Mr. Ray Charles, through GEORGIA ON MY MIND, in the Venetian Theatre September 18 through October 29, 2014.

“We are excited to bring this unique show to The Venetian and to fans from around the world who visit Las Vegas,” said John Caparella, president and chief operating officer of The Venetian, The Palazzo, and Sands Expo. “It’s a joy to bring audiences back to the golden age of renowned artists performing great songs with a live big band and choir on a world-class stage. The artists in this performance have a combined 11 Grammys, and Vegas’ own Clint Holmes is making his return to the Las Vegas Strip after eight years. This is a celebration of the genius Ray Charles and an evening with GEORGIA ON MY MIND will be a night to remember.”

Ray Charles is an American treasure who transcended racism, cultural upheavals, and spread his gospel, blues, jazz and country sound around the world. Charles won every major award from the Georgia Hall of Fame to the Hollywood Walk of Fame, from the Kennedy Honors to a Grammy Lifetime Achievement Award, and was inducted into the Rock N’ Roll Hall of Fame. This show celebrates his music.

“Our mission is to honor Ray’s life and his music,” said producer Larry Rosen. “It is extremely important that people understand that this music, which was created in America by a diverse society, is celebrated all over the world. The music is a melding of blues, jazz, gospel, R&B, and lots of soul. It will make you clap your hands, move your body, and enjoy being alive.”  Rosen also mentioned during the press preview, that he had heard about Holmes, but had never seen him perform. “So I made a point to go see him perform with Take Six, and that was it…I had found my star…” Rosen said.

Bob Goldstein, CEO of the Sands Corporation, had to make the final decision, so when the show was presented at the Smith Center in Las Vegas, he went to see it. “I was blown away, and told Larry (Rosen) to sign the show.  It’s got to be the best show not already booked by a Strip property!”

It is this writers opinion that Clint Holmes will be arriving and fulfilling a lifetime dream to headline a show on Broadway, and that show will be ”Georgia On My Mind,” and that will happen in 2015. It’s a natural.

Tickets are on sale now and can be purchased by calling The Venetian Box Office at 702-414-9000 or online at www.venetian.com. For more information on GEORGIA ON MY MIND: Celebrating the Music of Ray Charles and the musical performers, please visit http://bit.ly/VenetianGOMM. 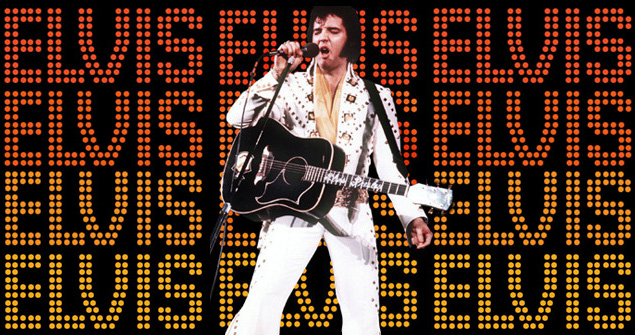 On Saturday, August 16, 2014, Elvis Presley fans across the world will be celebrating the memory of “The King,” on the 37th anniversary of his death. At the Westgate Las Vegas Resort & Casino (formerly the Hilton and the LVH), where he performed 837 consecutive sold-out shows, is a collection of authentic Elvis Presley memorabilia for guests to visit and admire including clothing, jewelry, costumes and the last car he owned. Presley performed thousands of shows at the Westgate property, originally The International Hotel after it first opened in 1969.

Throughout his epic seven-year stint, more people saw Presley perform at the property than anywhere else in the world. While at Westgate Las Vegas Resort & Casino, Presley fans can view the many artifacts on display throughout the property from The King’s Ransom Museum*. The collection includes various items of clothing, costumes and jewelry. The property also houses the legendary 5,000-square-foot penthouse, “Elvis suite,” located on the 30th floor. Fans are welcome to pay tribute to Presley at the life-size bronze statue located in the Westgate lobby. For more information or to book accommodations at the new Westgate Las Vegas Resort & Casino, call toll free at (800) 732-7117 or go to www.westgatelasvegasresort.com.

Another celebration of the “King,” will be taking place at Sam’s Town Hotel and Gambling Hall, where it will celebrate the life and legacy of ‘The King of Rock n’ Roll’ Elvis Presley, with live entertainment, food specials, contests, movies, music, and gaming promotions August 15-17. Throughout the weekend, Elvis’ most popular songs including “Hound Dog,” “Love Me Tender,” and “Jailhouse Rock” will play throughout the casino, while several of his hit movies are aired in Roxy’s, during scheduled times. Guests dressed as Elvis dine for free at Firelight Buffet. Elvis’s favorite dishes will appear at several of the food and beverage offerings throughout the property: The Sports Deli will feature a peanut butter and banana sandwich; and Billy Bob’s Steak House & Saloon and Willy and Jose’s Cantina will offer a “King Creole” dinner special – blackened orange roughy and shrimp creole with tobacco onions.

Renowned Elvis tribute artist Brandon Bennett performs at Sam’s Town Live! August 15 at 8 p.m. Bennett’s show takes the audience on a journey through Elvis’ career, symbolized by powerful vocals, high-energy stage performances and the legendary jumpsuits. Tickets are available starting from $15, plus tax and convenience fees, and can be purchased at any Boyd Gaming Box Office, by calling 702.284.7777, or visiting www.samstownlv.com.  An Elvis Karaoke Contest will be held in Roxy’s August 17 from 2-4 p.m. Cash prizes will be awarded to the top five contestants with the first place contestant receiving $1,000. Registration for the contest will take place from 12:30-2 p.m. See B Connected Club for complete rules and details. Beginning August 1, visit www.samstownlv.com for complete details about Elvis Weekend at Sam’s Town Hotel and Gambling Hall.

Was invited by a couple of my friends, Mel and Jackie, to attend a special preview of some new food that will be coming on the menu at Bonefish Grill, 6527 Las Vegas Blvd. And what a treat it was too. First off we were greeted warmly by the managing partner, Marcus Powers, who immediately had a nice red wine for Mel and Jackie, and a wonderful Pinot for me.

The first sample item was Bang Bang Shrimp on Flatbread, and they consumed that quickly. Since I’m allergic to shell fish, I got to eat most of the choice NY Strip Tataki (and gang that’s definitely a winner), but my personal favorite in the main course was the Rib-Eye Steak topped with White Truffle Butter. Now remember when you were a kid and maybe you went to a summer camp, or the beach, and Mom and Dad brought along some marshmallows and graham crackers? Well, you have to try the S’mores flatbread consisting ofcreamy chocolate, toasted marshmallow, sliced almonds, and sprinkled with graham cracker crumbs.

Oh, yeah, we also got to try the Banana Split flatbread. Everything was to perfection and the wait staff was superb. Powers should be quite proud. Oh, I also saw the very same items on CNN the next day.