“Raiding the Rock Vault” celebrated its debut at The New Tropicana Las Vegas on Friday, Nov. 7, with a star-studded red carpet event, where Las Vegas celebrities joined rock legends for a special kick-off party. The sold-out show, which pays homage to rock’s greatest hits from the ’60s, ’70s and ’80s, was met with standing ovations by the enthusiastic audience who welcomed the show to its new home at the Tropicana Theater.

“Raiding the Rock Vault” was named Reader’s Choice Best of Las Vegas 2014 by the Las Vegas Review-Journal and has consistently been ranked the No. 1 Performance in Las Vegas on TripAdvisor.

“Raiding the Rock Vault” performs Friday-Wednesday at 9:00 p.m., with tickets ranging from $59-$99 plus taxes and fees. A Rock Star Package is also available for $135 plus taxes and fees, which includes VIP tickets, a VIP Pass, a meet and greet with the rock stars prior to the show, and a two-CD set and concert program.

When stand-up comedian, Darren Carter takes the stage at the Laugh Factory, inside the New Tropicana Las Vegas, next week, Monday through Sunday, Nov. 17-23, he will unleash a captivating flurry of impersonations, observations and off-the-wall social commentary that is a comedy experience unlike any other. Carter will be sharing the stage with Steve Simeone, and the entire show will be hosted by, Mickey Joseph.

Carter’s unique blend of humor, sketch and impersonations has garnered industry attention in comedy, acting and music. After being spotted by hip-hop superstar Snoop Dogg for his dead-on impersonations of the rapper, he has performed multiple times at Snoop’s annual family reunion. He also appeared in the blockbuster “Be Cool” with John Travolta as well as a string of TV appearances, including Comedy Central’s “Premium Blend,” BET’s “Comic View,” “The Tonight Show with Jay Leno,” and “Comics Unleashed.” Carter can be seen on “Chelsea Lately” on E!, “Comics Without Borders” on Showtime, and has lent his voiceover talents for five characters in the top-selling Activision video game “Tony Hawk’s American Wasteland.” In 2008, he released his critically acclaimed comedy album “Shady Side,” which is now available on iTunes

Simeone’s unique, high-energy style of storytelling started around the family dinner table in suburban Philadelphia, where he competed for laughs on a nightly basis as the middle of three brothers. The events that happened there form the heart of Steve’s comedy today and he shares his memories of childhood with a contagious enthusiasm that makes his audience remember the joy of seeing the world through a child’s eyes. This fall marked Simeone’s Comedy Central debut on Gabriel Iglesias’ “Stand-Up Revolution” as well as the release of his eagerly anticipated CD “Remember This for When You Get Sad,” a compilation of some of his most-loved material. Simeone is known for leaving an impact on his audience, one full of laughs, emotion and moving moments they will remember for years to come. Joseph’s uplifting performance is filled with a multitude of characters and shifting opinions on such timely topics as sports, drug abuse, single parenthood, drunk driving, family, and religion. Mickey plants ideas into our minds and we go away with the power of clearer, more relaxed working techniques. His impressions run the gamut from Woody Allen to Stevie Wonder. This rubber-faced, non-stop, comic genius should not be missed! He brings out the best in his audience with his jack-hammer delivery, manic facial expressions and timely physical humor! 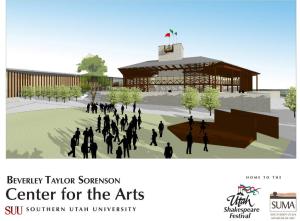 With a $38 million project under construction, a world premiere adaptation, a visit from England and the continuation of the Complete the Canon and History Cycle initiatives, the Utah Shakespeare Festival showed no signs of slowing down in 2014, its 53rd season. Producing 235 performances in rotating repertory in three theatres for 17 weeks is no easy feat, but through countless hours, a dedicated group of artists has pulled off another artistically successful year. “Cedar City, Utah, is a midsummer’s dream of a spot, where top-caliber theater rubs shoulders with high-desert canyons,” said Los Angeles Times reporter Sherry Stern. “If you’re an avid theatergoer, Cedar City’s Utah Shakespeare Festival is a must.” A must indeed, especially with the Beverley Taylor Sorenson Center for the Arts, the new performing and visual arts complex, now under construction. When the first shovel broke ground on the long awaited Center for the Arts on the campus of Southern Utah University, the cultural landscape of southern Utah was forever changed. Demolition of nine buildings took place in August and September, and now construction crews are working on rerouting utility lines. With red dirt flying, the Center is on track to finish in January 2016. The Center is predicted to further establish Cedar City as a regional arts mecca. It will serve as the home to the new Engelstad Shakespeare Theatre, the new Anes studio theatre, an artistic/production building and rehearsal studio for the Festival, and SUU’s Southern Utah Museum of Art (SUMA). The Center also features a tree lined walkway and sculpture gardens and will offer many large public gathering spaces ideal for receptions and special events.

Another large undertaking this year was the world premiere adaptation of Jane Austen’s Sense and Sensibility co-written by J. R. Sullivan and Joseph Hanreddy. Sullivan and Hanreddy also wrote “Pride and Prejudice,” which appeared at the Festival to great acclaim in 2010. The adaptation faithfully followed the plot and themes of Austen’s beloved novel. “From the masterfully adapted script, courtesy of Director Joseph Hanreddy and J.R. Sullivan, to a beautifully simplistic set that allows for seamless transitions, this theatrical jewel opens the door to Austen’s classic work in a way not previously explored,” said Lisa Larson, reporter for The Spectrum. Also, this summer scholars and lovers of Shakespeare traveled from England to America to study why Shakespeare is so popular here, and the Utah Shakespeare Festival was on their list of places to visit. Shakespeare on the Road, a team from the University of Warwick and the Shakespeare Birthplace Trust, which is based in Shakespeare’s hometown of Stratford-upon-Avon, stopped at the Festival as part of a 60-day road trip visiting 14 Shakespeare-related theatre festivals across America. Although the plays have closed, the Festival staff is hard at work preparing for the 2015 season. Artistic Director David Ivers commented, “The 2014 season brought strong productions and phenomenal artists to our stages. Our full time and seasonal staff are to be commended for delivering some of the finest professional theatre in the country. We are very excited to share 2015 with you!” The Utah Shakespeare Festival is located on the campus of Southern Utah University in Cedar City. Tickets for the Festival’s 54th season in 2015 are available by calling 1-800-PLAYTIX or by visiting the Festival website at www.bard.org.

Well, gang, that’s about it this week.