Enterprising magician Connie Boyd is proof positive that what happens in Vegas doesn’t always stay in Vegas. However, this beautiful and talented Las Vegas resident is poised to make that anomaly disappear in a flash.

As of late, Boyd has been riding a wave of extreme popularity out of the city and the country with international theater and television appearances and most recently on Costa Cruise Lines. The award-winning illusionist, who debuted in Las Vegas in the mid-80s and performed for many years in the city, left Las Vegas during the recession and hasn’t stopped working since. Credited with “bending the gender gap of a traditional magic act “(CNN Showbiz Today); “breaking the glass ceiling of magic to become the most foremost female magician of our time” (Easter Seals Telethon), and called “the premiere female magician of the day” (San Francisco Chronicle), she pulled her own unique transformation out of the hat beginning in 2008 when she initiated Connie Boyd Magic Productions. She has been creating and producing highly successful magic production shows starring eye-catching female magicians, two currently from Las Vegas, for Costa Cruise Lines, which has ships cruising the Mediterranean, Asia, the Far East, Indonesia, South America, and Fort Lauderdale, Florida.  Now Boyd is poised to bring her woman power home.

As for her own entrance into the Las Vegas performing arena back in the late 80s, Boyd, who hails from Canada and has a theatrical and dance background, assisted a young juggler named Wally Eastwood. Together they secured a spot in the show SPLASH at the Riviera in Las Vegas. It was after witnessing Barclay Shaw’s beautiful magic in that show that Boyd realized that she wanted to be a magician, even though females in the art were very rare. 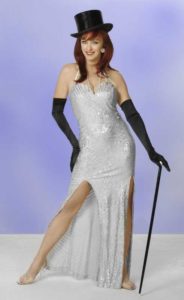 Boyd learned magic and presentation from David Copperfield’s magic consultant, Don Wayne and his choreographer/director Joanie Spina. Along with all the technical aspects of the art, one of the biggest lessons she learned was “that one must take responsibility for one’s equipment and one’s self.”

It was Boyd’s proficiency and uniqueness in the art that afforded her the opportunity to sub for Lance Burton for a year in the “Folies Bergere” at the Tropicana in 1989 and then take over his spot permanently when he left to do his own show at the Hacienda.  She became known for such illusions as “Floating and Flying” and “Cloth Vanish,” Boyd went on to perform in “Jubilee!” at Bally’s, had her own show at the Riverside in Laughlin, opened for both Louie Anderson and Eddie Arnold in Las Vegas, did television appearances out of L.A., performed at numerous corporate gigs and much more. She also won the awards for “Best Cabaret Magician” at the World Magic Awards at the Hollywood Palladium and the Prix du Public (People’s Choice Award) at the Grand Prix Magiques de Monte Carlo.

From the beginning, Boyd created her own style, starting with the basics and giving them a feminine twist. She also built her own props from the ground up – she would do mock-ups and then take them to a welder – and created her own material, making it interesting and unique. She still does it all to this day.

“I always try to produce magic like a woman instead of like a man,” she sums up, stating that female magicians are still mostly an anomaly. “I use my background in theater and dance in my magic. I like magic that looks like it’s real and tells a story. For example, a table or chair is pretty real – you don’t expect it to be magical.”

Aliante Casino + Hotel + Spa is feeling hot, hot, hot this summer with the introduction of Hot Summer Nights on the patio at MRKT Sea & Land. The new promotion will feature chef selection bites and bottomless drinks available from 8 to 10 p.m. on Fridays and Saturdays, beginning Friday, Aug. 5.  For the first time, MRKT’s spacious garden patio will be open in the evenings, welcoming guests with an array of seating, twinkled lights and misters to create a comfortable and inviting experience. The new menu special will include bottomless house wines and bottled beers available for $35, along with a selection of chef-inspired appetizers. Bites may include bacon wrapped dates in a red wine sauce, short rib crostini with brie and caramelized onions, chicken or beef skewers, and many others. For more information on MRKT Sea & Land’s menu items may be found by visiting http://www.aliantegaming.com/restaurants/mrkt/.

Grammy Award-winning rock innovators Blues Traveler will bring their one-of-a-kind performance to The Yard inside Topgolf Las Vegas on Thursday, Sept. 22, 2016 at 8 p.m. Tickets start at $35 and will go on sale Friday, Aug. 5 at 10 a.m.  After selling millions of records and logging thousands of miles on the road, Grammy Award-winning band Blues Traveler continues to chart new musical directions evident on their upcoming record Blow Up The Moon. A clever collaboration among various artists, Blow Up The Moon sees Blues Traveler keep an open-minded perspective on making music and enlists an eclectic mix of songwriters influenced by the band’s remarkable 25+-year career.  Blow Up the Moon is the first collaborative album that Blues Traveler has ever made. Prior to these sessions, it was rare for the band to have someone else perform on their songs and even more rare to have anyone outside the band write with them. This process was a unique and successful experience for each of these artists who found new depths and energy in their writing and performance. Doors for Blues Traveler will open at 7 p.m. and show time is 8 p.m. To purchase tickets, please visit www.topgolf.com/lasvegas, call Ticketmaster at 1-800-745-3000 or visit www.ticketmaster.com. This is an all-ages show.

Attention all Arts Supporters, Thespians and Theatre Lovers. SUPER SUMMER THEATRE will have its annual Gala Under the Stars on the Meadow Monday evening, Sept. 11. This year, for the first time, there will be a Casting Auction, offering guests a chance to bid on roles in the 2017 Season Opener production of Oklahoma!  In the off season, SUPER SUMMER THEATRE offers young people educational programming and classes at its rehearsal studios called Acting Out. “I can’t tell you how many times over the years that we have heard stories about how SUPER SUMMER THEATRE is the first theatrical experience for many young people. It warms my heart and makes our board strive to continue to influence young people interested in the performing arts.”
“Ticket sales account for only 70 percent of our revenue,” says Adrienne O’Donoghue, board chair of SUPER SUMMER THEATRE, which has a 41-year history of delighting Las Vegas audiences with high quality, affordable plays and musicals at Spring Mountain Ranch State Park.  “The gala is a way for us to raise funds to maintain the stage and equipment, the Meadow and surrounds, as well as provide educational opportunities to young people in our community.”

The Annual Gala Under the Stars & Casting Auction will take place on Sunday, September 11, 2016, at Spring Mountain Ranch State Park. Tickets are $150 for a VIP reception that starts at 5:00pm and reserved seating for dinner; $75 for adults and $40 for children over 5 (5 and under are free) for the main event that starts at 6:00pm. It is a family friendly event, with face painting and a bounce house for young children. All guests will enjoy a communal-style dinner, beverages and a performance from Speeding Theatre – Over 55, a senior theatrical group that is a partner with SST’s Education Program. Tickets are on sale at www.showtix4u.com. For tables, sponsorships and advertising, please contact Tom Kovach at 702-882-6886 or [email protected].

The fourth annual “Style with a Cause” event, inspiring women through fashion and beauty takes flight on the runway at the Great Hall inside Fashion Show Mall in fabulous Las Vegas Wednesday, September 7th from 5:30-8:30 p.m. Rachel Smith from Fox 5, will lead guests through a fun-filled night of friends, beauty bars by Sephora, a fall fashion show presented by Saks Fifth Avenue, a real life beauty transformation and the recognition of unsung heroes from the Las Vegas community. Created by Las Vegas fashion stylist Jenna Doughton the event will support Project 150, a 501c3 organization that is dedicated to helping the more than 2,500 homeless, displaced, and disadvantaged high school students in our community obtain food, clothing, school supplies, hygiene products, and the support they need to continue high school, graduate and have the resources necessary to grow and thrive.  Doughton is providing continued support through clothing drives with local fashionistas to supply “Betty’s Boutique.” Project 150’s clothing boutique is where the high school students get to shop before school starts, Christmas and milestone moments in their lives such as prom night. Doughton will also be choosing one program recipient at the end of the school year to intern for style with a cause to provide valuable work experience in the retail, event and marketing worlds.

“I can’t imagine having to figure out how I was going to turn in my next homework assignment without having any of the resources to do the assignment or the knowledge of where I was going to sleep or get my next meal. Add that to all of the other problems that go along with being in high school and trying to figure out how you fit into this world. I’m thrilled to be able to be part of the team that is helping these high school students realize that they are enough, they are worthy of success and they matter,” says Doughton.

For more information on “Style With a Cause,” additional event details, to purchase tickets or to submit a story of an unsung hero in the community, please visit or call 702.569.1008.