I first met these two guys in the late ‘90s, when they first moved to Las Vegas. They hired me to do a publicity campaign for them. I am very pleased to see how they have progressed over the years. And, I must be honest here, I couldn’t find a better act to work with.  Their ethics are beyond reproach, and they are just damn nice guys. Raja and I especially got along great as we both liked the same thing: Speed. At the time, I was still actively racing, and Raja had a great little sports car. Anyhow, just wanted to add this little tidbit to the story. And their magic, is magical believe me!

Chosen from a field of 43,000, Jarrett & Raja appeared as entrepreneurs on ABC’s “Shark Tank” where they debuted their newest illusion, the (world’s first) Piano Aquarium.  As Howie Mandel’s Wild Card pick, the pair were the sensational magic act on NBC’s “America’s Got Talent” (Season 7).   They were one of only five popular AGT acts chosen to headline in the 2013 “America’s Got Talent LIVE” at the Palazzo Hotel & Casino (Las Vegas).  Since then, they continue to shoot TV shows in LA, NYC, and London.  Other national TV appearances include The CW’s “Masters of Illusion”, SyFy’s “Wizard Wars”, BBC’s “The Slammer”, and CBS’ “The Late Show with Stephen Colbert”.

A Harry Blackstone, Jr. protégé, Jarrett Parker was mentored by the creative mind behind Doug Henning and numerous Broadway hits, Charles Reynolds.  As a solo act, he opened for Michael Jackson, Bill Cosby, and Debbie Reynolds. Pianist Raja Rahman is a graduate of The Juilliard School. Raja has toured Europe with legendary conductors Rostropovich, Solti, and Iona Brown.

Jarrett & Raja “Magic vs Music” will perform five nights a week, Wednesday through Sunday at 4 p.m., with ticket prices starting at $39.99 for general admission, $49.99 for preferred seating $69.99 for VIP and VIP booth seating inside the Stratosphere Theater. For show tickets visit, www.StratosphereHotel.com, www.TicketBat.com, the Stratosphere Box Office, or call 702.944.4919. 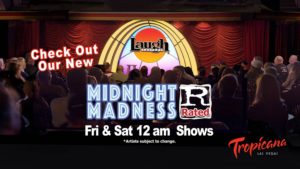 Just a quick little note to let you know about a new event taking place at the Laugh Factory inside the Tropicana Las Vegas.  Friday & Saturday at 12 midnight, the doors will swing open for a special Midnight Madness show. This ain’t your grandma’s stand up. Forget about cute puns and adorable observations and strap in for a night of in-your-face, no-holds-barred comedy! It may get dark. It may get dirty. It may make you question what’s appropriate to laugh at in public. And it absolutely will be a night you will never forget…whether you like it or not! From the Sunset Strip to the Las Vegas Strip, the world-famous Hollywood Laugh Factory has brought its amazing brand of comedy to Vegas nightly at the new Tropicana Las Vegas! The Laugh Factory has been recognized as the #1 Comedy Club in the country, bringing the hottest comedians in the business center stage for a supreme comedy experience that shouldn’t be missed. The regular shows happen twice nightly at 8:30 p.m. and 10:30PM.  & 12 Midnight Fri. & Sat. Artists are subject to change.

And, speaking about the Laugh Factory, don’t forget to head that way this weekend to catch one of the funniest guys alive, and one heck of a nice guy, Tom Arnold. Showtimes are 8:30 p.m. this Friday through Sunday.

The Henderson Pavilion, the state’s first open air amphitheater, celebrates its 15th anniversary with a special concert featuring Greensky Bluegrass. The event commemorates the venue’s 15 successful years, in which thousands came to experience one of hundreds of concerts, theater performances and special events. Tickets to the 15-year anniversary concert start at $15 per person.

This is the first time Greensky Bluegrass– a nationally recognized bluegrass and rock band – will perform at the Henderson Pavilion. The way Mumford & Sons and The Avett Brothers have penetrated the mainstream with acoustic instrumentation, Greensky Bluegrass’s unique sound and style mixes rock elements with roots and acoustic stylings into a sonic palette all its own. The band performs music from all five of its studio albums, including their recent release, Shouted, Written Down & Quoted. In addition, Greensky Bluegrass, who recently sold out their upcoming historic Red Rocks Amphitheatre performance, is expected to add several familiar cover songs from Pink Floyd, Allman Brothers Band, the Rolling Stones, Bruce Springsteen, and the Grateful Dead to Friday night’s set list.

Fruition joins Greensky Bluegrass as part of the Henderson Pavilion 15-year anniversary concert. The rock band, anchored by three-part harmonies and a blend of soul, blues, and British Invasion pop music, opens the show at 7:00 p.m.

The Salvation Army Women’s Auxiliary Southern Nevada cordially invites the Las Vegas community to celebrate the changing of the seasons, while raising money for a great cause. Enjoy an afternoon of delicious food and live entertainment from renowned pianist and vocalist Luggnutt at the 21st Annual Fall Luncheon and Silent Auction on Saturday, Oct. 7, 2017, inside the Esplanade Room at the Orleans Hotel & Casino. Doors open at 10 a.m. and the luncheon begins at Noon. Tickets are $45 per person, with tables of 10 available for $450 each. The proceeds will benefit The Salvation Army Southern Nevada’s programs and services.

The Salvation Army Women’s Auxiliary Southern Nevada is a membership of over 150 ladies dedicated to supporting The Salvation Army’s mission of serving those in need without discrimination through a variety of social services. This is accomplished through the Auxiliary’s function as a fundraising and volunteer group who care enough to do their very best. Their mission convenes monthly on first Mondays at the sound of the gavel executing a calendar of annual events, including Recruitment Brunch, Silent Auction, Crafty Ladies Christmas Boutique, Christmas Tea, Have-A-Heart Drive, Pitter-Patter Baby Shower, Huge Garage Sale, and Nearly New Fashion Show. These annual events and in-kind donations serve to benefit the compassionately life-transforming programs and services of The Salvation Army Southern Nevada, such as the After-School Program, Christmas Angel Program, Coats for Kids, Day Resource Center, Family Services, Homeless Outreach Services, Human Trafficking Victim Services, Thrift Stores, and Vocational Training Program.

For more information, or to RSVP for the 21st Annual Fall Luncheon and Silent Auction, please call 702-870-4430. RSVPs must be received by Friday, Sept. 22, 2017. For more information on The Salvation Army and the Women’s Auxiliary, please visit salvationarmysouthernnevada.org.

Well, gang, see ya at the Laugh Factory this weekend.