Drove out to North Las Vegas last week to watch a good friend perform his tribute show to the great Neil Diamond, inside The Club at the Cannery Casino. And, as usual, Rob Garrett, did one-heck-of-a-great show. In this writers opinion, of all the tribute artists running around Las Vegas (and elsewhere), there is none better than Garrett. 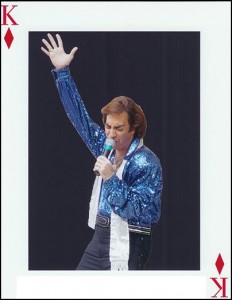 First, he naturally looks a lot like the real guy. Second his voice is basically, Neil’s. And, third, but not the least of the accolades, Rob’s arrangements are dead on to the original—and, he only has six musicians and two backup singers. The real Diamond has a few more on stage, and of course gets the big bucks, so he can afford it.

Who is Rob Garrett, and what makes his show work? Garrett was born in New York City (like Neil), where he grew up dreaming of one day performing like his personal heroes (at the time), Elvis, The Beatles and Neil. When his family moved to Las Vegas in 1974, Rob knew that one day that dream would come true. After all, he was in the city of dreams, where dreams do come true. In 1976 Rob was one of thousands who crammed into the new “Theater For The Performing Arts,” at the old Aladdin Hotel on opening night. The headliner was Neil Diamond, and that was when Rob became inspired and began to form an idea. In 1980, the future tribute artist formed a group called, “Rock’n’ Roll Heaven,” and for the next 15 years they played every corner of the world, gaining a reputation as one of the best musical tribute bands in the country.

In 1995, a producer of “Legends in Concert,” a well known tribute show on the Las Vegas Strip, asked Garrett if he would like to do his impression of Neil Diamond for a three month gig in Honolulu, Hawaii. Rob flew to Hawaii and stayed for three years.

Returning to our little village in 1998, Garrett formed his core of musicians and began touring the world, performing his now polished tribute to Neil Diamond. It didn’t take long before the media began calling him, “The King of Diamonds.” The billing has stuck and rightfully so.

Garrett’s core musicians are Keith Neal (lead guitar/acoustic guitar/vocals), Daryl Slade (bass guitar), Tony Cobb (percussion/rhythm guitar), Steve Gerard (piano/organ), John Grieco (keyboards/synthesizer) and Jeff Borree (drums). Michelle Rohl is his lead backup vocalist, and for this particular engagement, Rob had Elisia Tutt (her father, Ron, was Elvis’ drummer for 10 years and is presently with the real Diamond as his drummer) fly in from Memphis. This is a tight group, and they are not just hired musicians—they are family! So, gang, the next time you have an opportunity to catch Rob Garrett in action, get your ticket early and go see him. The gig at the Cannery last Saturday was SRO, with approximately 520 tickets sold. 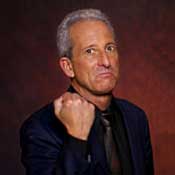 The “Pitbull of Comedy” has returned to Las Vegas. Bobby Slayton is back where he previously performed (prior to opening his own ill-fated comedy club up the street at The Tropicana Hotel/Resort), Hooters Casino Hotel on Tropicana Blvd. During his hilarious 80-minute stand-up act, Slayton takes on every stereotype under the sun with his quick-witted, acid-tongued style.  From the state of your marriage to the state of the union, Slayton dissects it all with his signature politically incorrect manner that has sold out comedy clubs across the country, and has most recently been featured in his own Showtime stand-up special “Born to be Bobby.”

Needless to say, Slayton always has his audiences laughing at things they shouldn’t. I took my grand-daughter, Monika (she’s the mother of my great-grand-daughter, Imani), to see this comedian at work. I had warned her, that she would be hearing a lot of crude routines, especially aimed at gay life. He didn’t disappoint me or her. I think, this particular show, was one of the best he’s done in a long time. The show also features comedian Robert Duchaine as an opening act.

“There’s no better place on earth than Hooters Casino Hotel to launch my return to Vegas,” said Slayton.  “Hooters is basically everything I want in one place; Gaming, booze, chicken wings, and Hooters. If they put in a putting green and cigar shop, they could just change the name to Nirvana!” Slayton continued, “With the hours of material from my CDs, Showtime special, audience reaction, the constant turmoil of the world and everyday life, you can be sure my act will never be the same.  And remember, if you can’t laugh at yourself, make fun of other people!”

Tickets are now available to see Bobby Slayton “The Pitbull of Comedy,” who is headlining in the Night Owl Showroom at Hooters Casino Hotel through April 2, 2011 for a limited engagement.  Tickets are $39.95 per person and may be purchased on-line at www.hooterscasinohotel.com, or by calling 866-LVHoots. Slayton’s show runs Thursday through Saturday with performances taking place at 8:30 p.m. Guests must be 21 or older.

One of my personal favorite comedians, and one could say the grandfather of stand-up comedy, Sammy Shore, is staging his Second Annual “Funny Bones Comedy Jam,” this Sunday, in the Ballroom at the Palms Hotel/Casino, 4321 W. Flamingo, beginning at 3:00 p.m. Shore has been a long time supporter of helping animals in need, and came up with this idea last year, as more and more animals were being cast aside by their owners (because of the recession), and could not afford the medical costs. Shore, along with Dr. Matthew Brooks of Town Center Animal Hospital, formed the Funny Bones Foundation last year, and staged the first “jam” at the Palms. This year, Sammy’s buddy, the above mentioned Slayton, will co-host the event with guests such as Vinnie Favorito, George Wallace, Dennis Blair, Geechy Guy, James P. Connolly, Doug Starks, Catherine Hickland, DJ Ben Harris and special guest, Pauly Shore. Last year, Sammy told me, they raised a tad over $20,000. Tickets are priced at $39.95 plus tax.

Well, gang, that’s about it for this week. Try to get over to the Palms Sunday. It’s for a great cause. I’m outa here!

1 thought on “King of Diamonds”