Was invited to have dinner at Steve Wynn’s newest dining experience at the Wynn Las Vegas, “La Cave.” So, with my good friend and fellow columnist, Nancy Barr, I accepted the invitation. 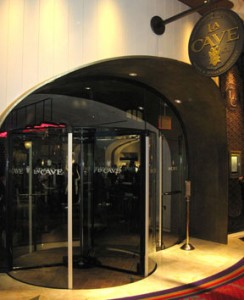 We parked in the main valet, which for me was a slight mistake as it’s a long walk from the front of the resort, to the restaurant (but it’s worth the walk). When we arrived, the Maitre D,’ informed us it would be a few minutes before our table would be ready—and that’s about how long we had to wait. The bar was full and the tables were busy, as we were led to our table. One thing I want to point out (we were not told of an option of sitting outside or inside), be sure to check the weather and if it’s nice, I suggest opting to sit outside.

The service at La Cave, is as expected of a Steve Wynn restaurant, first class. The décor is on the French side of things, and designed to resemble a cave—thus the name. There is a fine selection of wines available, with the bottles stacked on sections of the walls, utilizing a colored light code. Were we to order wine, our waitress (very cordial and knowledgeable) would climb a ladder to retrieve our bottle.

Nancy ordered stuffed chicken from the “Farm,” mixed green salad from the “Garden” and beef filet from the “Grill.” My order consisted of the “Farm:” cavatelli pasta with braised fennel, sausage and garlic (perfecto), followed by the “Oven:” chorizo, Italian, andouille sausage flatbread (my personal favorite), and “Grill,” sliced sirloin steak, mushroom fondue, and cippolini onions (excellent). “From the Wynn,” we split an American chocolate cake and “beignets,” with strawberry jam and crème anglaise.

The entire experience was one of outstanding service, excellent preparation and presentation, and the price was not bad. I also had a couple of beverages, as did Nancy, and the total tab came to just about $120. You might think that is a wee bit high, but believe me when I say, it was well worth it. I highly recommend a trip to La Cave. 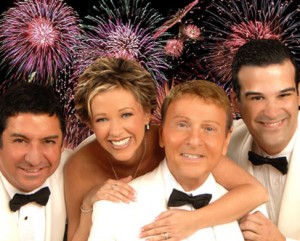 One of my personal favorite vocal groups (I honestly have perhaps three) is “Shades of Sinatra.” The four entertainers who comprise the group,  Carmine Mandia, Lisa Smith, Larry Liso and Ryan Baker, are all very talented, and perform individually in various clubs throughout the village. The news is that they will be performing in the showroom at the Clarion Hotel & Casino (formerly the “Debbie Reynolds Hotel” and most recently the “Greek Isles”), beginning Tuesdays February 1 & 8, with discounted preview night prices. They officially open on Tuesday, February 15. Show times are 6 p.m. with tickets priced at $29.95 for the previews. Call the box office for further information 702-990-1524.

Lots of activity going on at the Las Vegas Motor Speedway, as they prepare for the return of the “Boys of Thunder,” March 3-6.

First off, they have set up a new ticket price for kids age 15 and under. When accompanied by a full paying adult, kids will get the same priced ticket at 50 % off. That goes for all the events that week, and any priced ticket or package. It’s a great way to get the youth of our city (and elsewhere) acquainted with NASCAR racing, and was the brainchild of LVMS president Chris Powell.

A major change in the normal schedule will also take place this year. The NASCAR Nationwide series will have an extra day of practice on Thursday, March 4, instead of cramming everything in on Friday for the Saturday race. In addition, drivers competing in the Sam’s Town 300 will participate in an autograph session at 2 p.m. on March 3 in the Neon Garage. The grandstand and Neon garage will be open to the public at 11a.m. free of charge on March 3.

Another change involves the starting time for the Kobalt Tools 400 NASCAR Sprint Cup race on Sunday, and the Sam’s Town 300 on Saturday. Both events will have the green flag waved at noon. Qualifying for the Kobalt 400 will take place Friday at 3:40 p.m. as part of the Stratosphere Pole Day activities, with the Nationwide event qualifying on Saturday at 9 a.m. Tickets may be purchased via the internet at www.lvms.com or by calling 800-644-4444.

One last thing—I’ve heard from various reliable sources that the open wheel race cars (The Indy Racing League), are just days from inking a pact with the LVMS to race at the speedway, along with the NASCAR Camping World trucks the weekend of October 15.

Late breaking news: We have just learned that longtime/publicist/columnist and a friend, Frank Lieberman passed way this morning (Saturday). We will have more information in our next column.

1 thought on “La Cave At Wynn”