The owners of the Las Vegas Aviators® knew their new ballpark in the community of Summerlin® would usher in an improved fan experience, but they couldn’t have envisioned the meteoric surge in ticket sales, as the team currently leads all of Minor League Baseball in attendance.

And now Las Vegas Ballpark® has a major national award to add to its accomplishments, as www.BaseballParks.com announced that the new facility is the winner of its 20th Annual Ballpark of the Year Award. 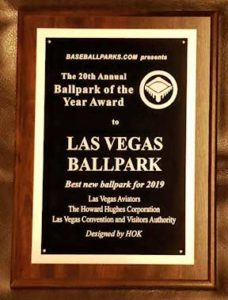 Every year since 2000, BaseballParks.com has presented this honor to the new or remodeled baseball stadium with the best combination of site selection, exterior appearance, architectural design, and fan amenities. The selection is made by an advisory panel utilized by the 22-year-old website. The announcement of the award was made in the July 31 edition of USA TODAY Sports Weekly and at BaseballParks.com. Joe Mock, founder and webmaster of the website and a frequent contributor to USA TODAY publications, penned the article about this year’s honor.

The Aviators of the Pacific Coast League are the Class Triple-A affiliate of the Oakland Athletics. The Howard Hughes Corporation®, owners of the Aviators and developers of Summerlin, covered the costs to design and build the park. Architecture firm HOK developed its design. The Las Vegas Convention and Visitors Authority (LVCVA) committed $80 million over 20 years for a naming rights sponsorship.

Local fans will be able to watch the presentation of the award in person prior to the Aviators’ home game Saturday, August 3. Mock will present plaques to team President and COO Don Logan and Project Designer Devin Norton from HOK. Also, on hand will be Summerlin President Kevin T. Orrock.

“We love making baseball history with Las Vegas Ballpark and are thrilled to receive this merit-based award,” Logan said when informed of the honor. “It’s truly a winning stadium that is setting a new standard for professional baseball nationwide.”

“Las Vegas Ballpark joins City National Arena, practice facility of the Vegas Golden Knights, to make Downtown Summerlin® a major sports destination, not just for the immediate Summerlin community but for everyone in Southern Nevada,” said Orrock. “As owner of the Las Vegas Aviators, The Howard Hughes Corporation is committed to nothing but the best for both the team and the fans, ensuring the stadium experience is exceptional. We couldn’t be more pleased to be recognized by BaseballParks.com with this award.”

Unlike other ballpark awards, the honor presented by BaseballParks.com is based on merit, not on a vote by fans. Mock, who has visited all 203 ballparks used by the Majors, spring training and the affiliated Minor Leagues, consulted with two other experts in the field to determine the winner. Joining Mock on the selection panel are Doug Greenwald, baseball broadcaster for the past 24 years, and Graham Knight, author of three books on ballparks and who operates the popular Baseball Pilgrimages website.

Pat O’Conner, President of Minor League Baseball, was thrilled when informed of the award. “The Las Vegas Ballpark is a magnificent facility with every aspect of the fan experience and player development taken into consideration, from planning through construction. I’m so happy for Don Logan, who has been working for 20 years to get a new ballpark.

“It’s been a decade since we’ve seen the debut of so many excellent ballparks,” Mock remarked. “That presented us with quite a challenge to pick the winner this year, but after examining all six of the parks, I’m confident Las Vegas Ballpark is one of the best parks ever built.”

The Neon Museum announces the Engelstad Foundation as presenting sponsor of its upcoming exhibition, “Lost Vegas: Tim Burton @ The Neon Museum Presented by the Engelstad Foundation.” With a gift of $250,000, the Las Vegas-based foundation will fund a substantial portion of the costs associated with bringing this landmark, large-scale exhibition to the museum this fall. Opening Oct. 15 and on view through Feb. 15, 2020, Burton’s exhibition represents the first time in nearly a decade the renowned American film director, producer, artist, writer and animator will stage an exhibition of his original fine art in the United States.

“We are immensely grateful to the Engelstad Foundation for this generous demonstration of support for the most exciting art exhibitions ever to be staged in Las Vegas,” said Rob McCoy, president and chief executive officer, The Neon Museum.

“Lost Vegas: Tim Burton @ The Neon Museum Presented by the Engelstad Foundation” will comprise sculptural and digital installations celebrating Burton’s link to Las Vegas’ historical neon heritage. These artworks, many of which will be site-specific creations, will play with the museum’s landmark sign collection, which was prominently featured in Burton’s film Mars Attacks! This irreverent homage to the sci-fi B-movies of the 1950s and 1960s and the disaster films of the 1970s unleashed gleefully destructive alien invaders upon gamblers, casino workers and Tom Jones.  The presentation of Burton’s art in Las Vegas represents a unique experience where the host institution also serves as creative inspiration. The museum’s distinctive campus will be transformed through the artist’s singular vision for this original exhibition. of new work as well as previously exhibited pieces.

Burton is widely regarded as one of cinema’s most imaginative and visual filmmakers. He has achieved both critical and financial success in the live-action and animation genres. Burton’s accomplishments in filmmaking are a consequence of his artistic eye. Long before becoming a director, he expressed himself through drawing and painting, which also became an integral part of his creative process. Burton’s past exhibitions have drawn millions of patrons around the world in cities such as Melbourne, Los Angeles, Paris, Prague, Tokyo, São Paulo, and Mexico City.  His exhibition at MoMA in New York City drew over 800,000 visitors, making it the third most attended exhibition ever.

Happy debuts its Las Vegas residency at Mandalay Bay. HAPPY PLACE, an interactive, immersive pop-up exhibit with larger-than-life installations and multi-sensory themed rooms, will turn Sin City into “Grin City” with their newest location at Mandalay Bay Resort and Casino opened on Friday, Aug. 23. On a mission to spread happiness across the world, “the most Instagrammable pop-up in America” (Urban Daddy) has helped more than half a million people “find their happy” while exploring 12 vibrant rooms.

HAPPY PLACE features 15,000 square feet of playful spaces and cheerful moments including a Super Bloom room filled with 40,000 handmade gold flowers for the perfect photogenic floral backdrop, an Upside Down room that defies gravity and bends reality, six-foot tall X’s and O’s covered in thousands of mirrored squares and surrounded by red lips, the World’s Largest Indoor Confetti Dome, a Giant Rainbow complete with a Pot of Happiness to jump into, the signature Rubber Ducky Bathtub of Fun, and the wildly popular Cookie Room, which is like stepping inside of your favorite chocolate chip cookie complete with the aroma of fresh baked cookies

With the perfect background to countless once-in-a-lifetime moments, HAPPY PLACE offers an extraordinary whimsical experience for groups of all sizes and ages, from birthday parties to date night to bachelorette parties. The pop-up has been the site of over a dozen marriage proposals and promposals plus hundreds of first dates and private parties. HAPPY PLACE at Mandalay Bay will also bring its charity Lemonade Stand to Las Vegas, with net proceeds benefitting local charities. To date, HAPPY PLACE has donated over $100,000 to local groups in the four cities it has resided in.

The inspiration behind HAPPY PLACE comes from its founder, Jared Paul, who is on a journey to raise his children surrounded by positivity and joy. “HAPPY PLACE exists to provide an oasis for people of all ages and backgrounds to come together and embrace moments of happiness in their everyday lives. It’s been incredible to see all of the smiles created and lives it has touched so far,” said Jared Paul.

In “Moonwalkers: Not Because It Was Easy,” longtime space exploration reporter, speaker and author John Getter tells us how we landed on the moon based on direct research and first-hand conversations with those involved in the space race between the USA and the then Soviet Union.

“Even if you watched astronauts land on the moon, these stories were generally unknown, especially about the Soviet program, many of them held as official secrets, until I did some work in Moscow to help make them public,” Getter said.

During his earlier career as a reporter, “I was privileged to sit at Yuri Gagarin’s desk in his personal office, spend hours visiting in Mission Control Moscow – even exploring the capsule used by Gagarin, the first man in space,” Getter noted. “And when the second Soviet in space, Gehrman Titov, died, I became an honored guest at his funeral.” Getter also met the first woman in space, Valentina Tereshkova.

The second part of the book, the timeline, chronicles the development steps of both programs, Mercury, Gemini, and Apollo for the USA and Vostok, Voskhod, and Soyuz for the Soviet Union – each program, success-by-success, failure-by-failure, accomplishment-by-accomplishment. Lesson learned? Better IS better than good enough.

“Moonwalkers: Not Because It Was Easy” arises from the spirit of President John F. Kennedy, who famously announced the lunar program on May 25, 1961, with the challenge, “We choose to go to the moon in this decade and do the other things, not because they are easy, but because they are hard.”

The book is available on Amazon in paperback and for the Kindle at https://amzn.to/2XM3JYL.

Since 1976, no other team in off-road motorsports has set a multi-generational record of performance and victory that can match the hard-working McMillin family from greater San Diego.  Their now legendary blue “M” logo is an enduring symbol of excellence in business and in desert off-road racing, both in the United States and down Mexico’s famed Baja peninsula.

The McMillan’s have set a bar few others can emulate with the possible exception of Roger Penske, Chip Ganassi or Rick Hendrick.  While the McMillin Racing team has won every major off-road race in the years since Corky and Mark first strapped into their old Volkswagen powered Hi-Jumper dune buggy, three generations of McMillin’s have made their mark in desert racing’s biggest stage, the legendary SCORE Baja 1000.

For the first time in the sport’s history, the chronicle of one team’s incredible journey is captured in Big Blue M. With forewords by Mark McMillin, Sal Fish and Frank DeAngelo, Big Blue M is a comprehensive overview of a uniquely American success story. Filled with more than 750 rare photographs and artifacts from the McMillin Racing archives, this book is dedicated to the late Corky McMillin and his far-reaching family legacy.

Well, gang, been really busy on getting my new book ready for publishing. I will preview it a wee bit in a column soon and will be accepting pre-ordered books, of course the will be autographed and dated for those of you who want to read an interesting history about aviation.  This is definitely a teaser.