There are few cities that offer more of an opportunity to rub celebrity elbows than Las Vegas, and there will be a lot of celebrity elbows to be rubbed Wednesday afternoon at the Italian American Club, that’s for sure, when local and national entertainment legends are inducted into the Las Vegas Entertainers Hall of Fame. The inductees are: Bob Anderson, Pete Barbutti, Joe Darro, Buddy Greco, and Rich Little. The following brief bios are courtesy of fellow writer, Sam Wagmeister, with a few personal thoughts tossed in. 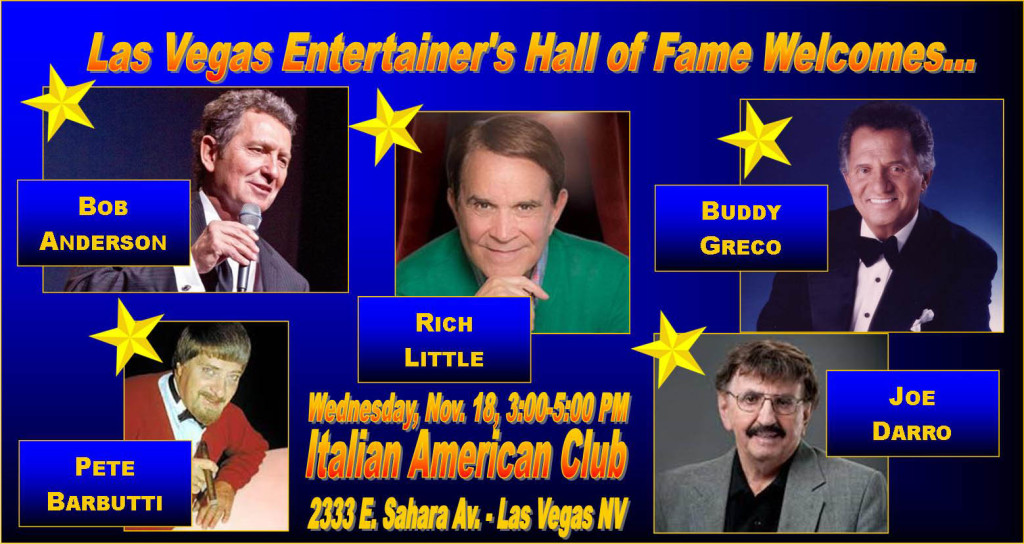 My personal buddy, and a guy who I’ve known for more than 30 years, tribute artist, crooner and one heck of a nice guy, Bob Anderson, is wrapping up his nearly one year run at the Palazzo, where he has  headlined the Sinatra tribute, “Frank-The man-The music.” The show has been labeled, “the most authentic re-enactment of Frank Sinatra ever performed on a live stage.” People Magazine called Anderson America’s Greatest Singing Impressionist. He has appeared on over 100 television shows including Johnny Carson’s “The Tonight Show,” and David Letterman, to name just a couple. Bob held court at The Top of the Dunes for 12 years, a venue that became a local gathering spot for celebrities after their shows. Anderson finished 12th in a poll of readers of the Las Vegas Review-Journal when asked who were their all-time favorite performers in Las Vegas’ first 50 years, nestled right between Barbra Streisand and Ray Charles.

Another longtime friend, comedian Pete Barbutti, a master story teller, who has travelled the comedy circuit and played rooms internationally, as well as locally, including the Frontier, Riviera, Thunderbird, and Sahara. His television appearances included variety shows hosted by Merv Griffin, Mike Douglas, Johnny Carson, Steve Allen, Arthur Godfrey, and Gary Moore. He was also a regular on the television show “The Las Vegas Show,” and wrote and starred in his own “Pete’s Place,” where he shared the stage with Buddy Greco and other legends in the summer television replacement show “Away We Go.” Pete has a number of classic’s that he has performed over the years, but my favorite is making music playing a cigar, and the other is the using a broomstick.

Pianist and musical director, Joe Darro, who is a familiar face around town at The Dispensary, Italian American Club, German American Club, and other popular venues with his keyboard. Darro, who served as musical director for Debbie’s Reynolds’ television show, has also performed with Jack Jones, Vic Damone, Louis Prima, Judy Garland, Kenny Rogers, Shecky Greene and Frank’s son, Frank Junior. If you are promoting a benefit and need a piano player, all one needs to do is give him a call and he’s there. One of the good guys in our little village, that’s for sure!

One of the really greats in the world of music, and a good guy too, who deserves to be honored is Buddy Greco. Greco began crafting his legend early, when he first joined the Benny Goodman band as a piano player. He’s credited with having released over 70 albums, 100 singles, and appeared with the Rat Pack in the ‘60s. In 1967, Greco’s summer replacement show, “Away We Go”, included guest stars Buddy Rich and George Carlin (with fellow inductee Pete Barbutti).

In Buddy’s Las Vegas days he was a well-recognized face at the Desert Inn’s Starlight Room. He wrote and produced the tribute revue, “Fever! The Story and Music of Peggy Lee,” that toured nationally to rave reviews in 2012, starring his wife Lezlie Anders. This particular show previewed at the Judy Bayley Theater on the grounds of the UNLV, and was one of the best new revues I had ever seen promoted in Las Vegas at that time. I have to say, Lezlie was perfect. When she sang “Fever” in that beautiful red dress, well all you could say was…Wow!

Impressionist Rich Little, currently performing at the Tropicana Casino at 7:00 p.m., has been honored all over the world as one of the greats of the impressionist world. Little’s new show is a delightful retrospective of his 50 year career. Little, a Canadian, who made his first American television appearance on “The Judy Garland Show,” over the years became a familiar face on the “Dean Martin’s Celebrity Roasts,” and appeared a bunch of times on the Johnny Carson’s “The Tonight Show,” as a performer and guest host. After Jack Benny saw Little’s impression of him, Benny sent Little a note that read, “With Bob Hope doing my walk and you doing my voice, I can be a star and do nothing.”  Mel Blanc, the master voice of Bugs Bunny, Daffy Duck, Yosemite Sam, and hundreds of others, tagged Little “The Man of A Thousand Voices.”

One of Las Vegas’ most popular holiday experiences is back at Las Vegas Motor Speedway as “Glittering Lights,” has returned to the superspeedway property. Glittering Lights is Nevada’s largest holiday drive-through lights show and will feature more than two million lights on a 2.5-mile course. The popular spectacle began on Friday, Nov. 13, and will run through Jan. 3, 2016, and is a great entertainment option for the whole family.

On Tuesday, Dec. 1, 2015 at 11 a.m., Mike Tyson will come face to face with…Mike Tyson. Tyson will unveil the world’s first Mike Tyson wax figure at Madame Tussauds Las Vegas. The figure is modeled after his star turn as himself in Warner Bros. Pictures’ “The Hangover.” After the figure is revealed, he will permanently be on display inside the attraction’s The Hangover Experience and positioned right next to his beloved tiger, forever trapped inside of the bathroom.

Tyson posed for the figure this spring for nearly two hours with a team of 10 artists capturing nearly 300 measurements of his athletic frame. As with all Madame Tussauds’ figures, Tyson’s figure represents his real-life size and likeness. Approximately 20 artists took nearly six months to create the figure. After Tyson posed, his measurements used for the figure were first sculpted in clay by hand and then covered in a plaster cast. Once the clay was removed from the cast, the wax was poured in and allowed to cool. Nearly six weeks were spent meticulously inserting each hair by hand, which is customary for Madame Tussauds’ studio team. Finally, the figure was fitted with acrylic eyes and teeth, while countless layers of tinted paint were applied to build up skin tones and replicate his iconic face tattoo. Similar to role in the movie, Tyson will be dressed in a shirt and jacket.

“I am truly honored to be an addition to the Madame Tussauds celebrity collection,” says Tyson. “I knew the replica of me would be of high caliber but I was blown away at the details and how much it truly looked identical to me. Side by side, it’s almost impossible to tell the difference.”

As for where Tyson’s figure will be, The Hangover Experience is Madame Tussauds’ newest themed room, based on Warner Bros. Pictures’ The Hangover, the popular comedy trilogy. Launched on National Hangover Day, January 1, 2015, the experience is complete with the notorious hotel room, a smashed replica of the Las Vegas Metropolitan police car and the wedding chapel as seen in the film. The room also features two additional character figures from “The Hangover” Trilogy, “Alan” (played by Zach Galifianakis) and “Phil” (played by Bradley Cooper). Madame Tussauds began creating The Hangover Experience in July 2014.  The 1,100-square-foot room was created in conjunction with Warner Bros. Consumer Products.

Well, gang, that’s about it for now…Had a wonderful vacation in Mexico and now I’m home. See around town.