The Las Vegas Chapter of Speedway Children’s Charities has distributed more than $311,000 to various national and 57 local charities after another successful year of fundraising. The charity, which has raised and distributed nearly $3 million since its inception in 1999, has made donations to a number of national charities – including the Tony Stewart Foundation – and awarded virtually all the remaining proceeds to 57 deserving Southern Nevada charities at its annual Grant Distribution and Holiday Tree Lighting Ceremony at Las Vegas Motor Speedway. The more than $311,000 raised in 2017 is the second-highest total for the Las Vegas Chapter, behind the charity’s $314,000 in distributions in 2007.  The Grant Ceremony was held in the Drivers’ Meeting Room in the infield media center of the speedway. SCC Board member and KOMP-FM radio personality Brittney Cason emceed the ceremony.

Baby’s Bounty, the Nevada Blind Children’s Foundation, Street Teens, and the Nevada Childhood Cancer Foundation are among the charities receiving grants. Children and representatives from most of the 57 organizations attended the event, which includes food, holiday games and gifts from Santa Claus donated from a toy drive held by Harsch Management. The children and their families also were treated to complimentary tram rides through Glittering Lights at Las Vegas Motor Speedway when the program concludes.

“This is one of our most special nights of the year,” said Paulette Anderson, director of the Las Vegas Chapter of SCC. “All of the hard work of our volunteers and board this year has enabled us to raise a great deal of money for 57 worthy charities, and it will be a pleasure to make their holiday season a little brighter. This night is for the kids, and we can’t wait to share our joy with them.”

Las Vegas Motor Speedway, Levy Restaurants and Harsch Management sponsor the Grant Ceremony. Fundraising events for the 2017 season included Laps for Charity at Las Vegas Motor Speedway, the Drive for Charity Golf Tournament, the PJ 5K Run and 1-Mile Walk and the NASCAR Driver & Memorabilia Auction. Making a difference in children’s lives is the focus of Speedway Children’s Charities, and SCC strives to do this in collaboration with the nonprofit organizations it supports nationwide. For more information on SCC, please contact director Paulette Anderson at 702-632-8242 or [email protected].

When Dom Irrera takes the stage, he does not simply get on it, he owns it!  And you can see what I mean this weekend at the New Tropicana, as Dom will be appearing at the Laugh Factory all weekend, and if you want as really good time, filled with a ton of laughter on New Year’s Eve, there is only one place to be. The Laugh Factory with showtimes set for 8:30, 10:30 p.m. and a midnight show Friday and Saturday.!

Dom projects a singular charisma that firmly engages audiences from the opening moment and doesn’t let go until the end of the performance, and beyond. Trying to analyze what makes a comedian special is typically a fool’s errand, but we’ll give it a go: With Dom, it seems to be a blend of regular-guy presence and relaxed, effortless delivery-and, of course, what he’s delivering is top-notch material, laced with an array of colorful characters and voices. Beyond beautifully-crafted jokes and routines, Dom’s also giving the audience one-man sketches and bursts of improv.  The impact, whether you’ve seen him once or dozens of times, is that you feel like Dom is kind of a friend, someone you’d like to have a beer with-and, not uncommonly, that you’ve become part of the de facto Dom Irrera family. And this is one happy, fun family you look forward to seeing often.

Indeed, people come out to see Dom whenever he’s in town, sometimes amounting to countless times over several years, partly for all these reasons, partly because he always returns armed with heaping hunks of new material. Likewise, clubs, festival and other events are eager to bring Dom back over and over-for example, he’s made more appearances at the prestigious Just For Laughs Festival than any other American comic. Ditto the Cat Laughs Festival in Kilkenny, Ireland.  Indeed, Dom Irrera’s stand-up material was honed in a multi-generational Italian household in South Philadelphia with his mother, sister, grandmother, uncles, and cousins all under one very big roof. A great-grandmother even lived across the street. Together, there were three floors and four generations of family.

His first big break was his performance on Rodney Dangerfield’s “Nothing Goes Right” comedy specials for HBO. In 1989 Irrera’s own HBO “One Night Stand” earned him his first CableACE award for Best Stand-Up Comedy Special. In ’95 he won a second CableACE for the Showtime stand-up series he hosted, “Full Frontal Comedy.” That same year he received a second CableACE nomination in the writing category for his work on Comedy Central’s animated series, “Dr. Katz: Professional Therapist.” He also starred in a solo stand-up special for HBO in ’92, titled “Command Performance.” He has performed on “The Tonight Show with Jay Leno,” “The Late Show with David Letterman, “Late Night with Conan O’Brien,” “The Late Late Show with Craig Ferguson,” “The Daily Show with Jon Stewart,” “The View,” and made several appearances on “Oprah.”  An avid sports fan, Dom hosted four seasons of Comedy Central’s irreverent football show, “Offsides“, where he conducted hilarious on-the-field interviews with football greats.  His film work includes a featured role in Robert Townsend’s “Hollywood Shuffle,” a cameo in the Coen Bros. Film, “The Big Lebowski,” “The Fourth Tenor,” starring old friend Rodney Dangerfield, and he played himself in the Rodney Dangerfield / Dom De Luise film, “The Godson.”

If you want to skip the Strip this year and celebrate New Year’s Eve at Silverton Casino with bottomless drinks, delicious dining menus and point multipliers to ring in the New Year.  Partygoers will enjoy bottomless cocktails from 7 p.m. – 10 p.m. at all casino bars for only $25 in advance and $40 on December 31, 2017.  Included in the ticket price is a complimentary admission into Veil Pavilion at 10 p.m., which turns into a DJ dance party with a champagne toast and balloon drop at the countdown to 2018.  Also, guests receive a $5 off the New Year’s Eve specialty dinner buffet at Seasons from 9 p.m. – 10 p.m. with their Skip the Strip ticket.

A three-course menu will be served at Sundance Grill from 11 a.m. to midnight for only $24.99 and includes a glass of house wine.  The starter will be a choice of soup or salad.  A 12-oz. slow roasted prime rib with fried shrimp, roasted fingerling potatoes and broccoollini will be served for the entree. The final course is a white chocolate-mascarpone with crushed biscotti and macerated strawberries.

For diners that are looking to ring in the New Year at Twin Creeks Steakhouse, a three-course menu will be served from 4 p.m. to 10 p.m. for $60 per person and includes a glass of house wine.  For the first course, diners have a choice of charred octopus with fennel, white beans, cherry tomatoes, pernod beurre blanc and preserved lemon or warm burratta with roasted tomatoes, garlic and grilled ciabatta or steak tartar with capers and truffle aioli.  Diners have three choices for their entree, which include braised lamb shank with pomegranates, sweet potato hash and sautéed spinach or veal lollipop with truffle potato gratin and juniper sauce or a seabass with fennel and olive escabeche and fingerling potato coins.  The meal is finished off with a choice of chocolate mousse with amarena cherries and a gold leaf or pana cotta and grapefruit granite or white wine poached pear with saffron, sabayone and blackberries.

Silverton Rewards Club members receive 18X points on video reels, and 2X points on table games from 9 p.m. to 11:59 p.m. on New Year’s Eve.   Our casino floor will be ringing in 2018 with party favors and complimentary champagne.

Entry fees remain the same for the 2018 tournaments. The Plaza Hotel & Casino offers a “bingo only” package for $130 that includes registration for the two-day Super Bingo tournament and complimentary lunch each day as well as “room-and-bingo” packages that start at $239 for a three-night stay. Super Bingo players also enjoy an open bar during all the tournament sessions. Super Bingo registration is available at www.plazahotelcasino.com/bingo/super-bingo-registration.  Drawing nearly 1,000 people to compete head to head with no linked games, Super Bingo at the Plaza attracts players from as far away as Hawaii and Canada to win big and socialize with like-minded bingo players. Watch the excitement from the last tournament online.

Recently, the Plaza debuted a renovated bingo hall to give guests an even better bingo experience. On the third floor of the Plaza, the bingo room has new carpet, chairs, and tables with 200 fixed base electronic bingo units as well as more charging stations and electrical outlets for guests to use.  The Plaza offers high prizes and payouts coupled with a fun, friendly and relaxed atmosphere making bingo an important part of the Plaza experience and an integral part of the property’s continued success. For more about bingo at the Plaza visit: www.plazahotelcasino.com/bingo. 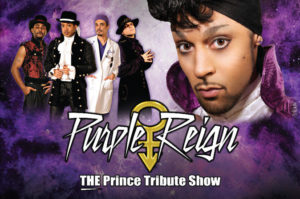 Purple Reign, the world’s #1 Prince tribute starring Jason Tenner, performing in the new Tropicana showroom, has announced a special ticket price for locals of the Las Vegas Valley of $19.99 (plus taxes and fees) for up to four tickets with local state ID. Now locals can party like its 1999 and share the deal with three of their closest friends. Celebrate the holidays and all of 2018 by booking your tickets to witness the new residency at Tropicana Las Vegas.

Purple Reign: The Prince Tribute Show, presented by Reign Entertainment Productions, Inc. in partnership with Red Mercury Entertainment, captures the imagination and seamlessly re-creates the blistering performances and raw energy of Prince in his prime and returns guests to the era that made “The Artist” an international superstar. Featuring a tribute Morris Day and The Time, and Vanity 6, this show is a must see for Purple Rain movie fans and all live music fans alike. An award-winning Prince tribute, Purple Reign features Jason Tenner as Prince and returns guests to the era and blistering performances that made “The Artist” an international superstar. The $19.99 local ticket offer is subject to additional taxes and fees. Locals can purchase up to four tickets per show with each local ID. Purple Reign, The Prince Tribute Show performs Wednesday through Saturday at 9 p.m. inside the Tropicana Theater. Guests must be 18 years or older to attend the show. Tickets can be purchased at the Tropicana box office, by calling (800) 829-9034 or online at www.troplv.com and Ticketmaster.com.

Here’s to a fantastic 2018 for you and yours. As for  me, I’m in the process of planning my 85th Birthday party. It should be a good one!