Rich Hall shot to prominence as a cast member of “Saturday Night Live.” His fame in the U.S. increased with numerous appearances on “Not Necessarily the News,” “The David Letterman Show,” “Fridays,” “Sniglets” and “The Johnny Carson Show.” Hall’s brand of humor spread across the pond and made him a top-selling and in-demand comedian in England, regularly performing to sold-out crowds. Critics have hailed Hall as one of the best acts in comedy and David Letterman says, “Rich Hall is the real thing.”

Spencer James’ comedy career started very early on, namely as an 11-year-old fat kid getting picked on by school bullies, while also being ignored by seemingly every girl in his vicinity. James won 2014’s The World Series of Comedy in Las Vegas. He has gritted his comedy teeth on bars and comedy clubs across America, including performances for the fisherman of Dutch Harbor, AK, made famous by the hit TV show “Deadliest Catch,” “Laughs” on Fox TV and also for American troops stationed in Pearl Harbor. Currently residing in Denver, his show consists of his warped reactions to first-time relationships, a result of a sort of “fat-kid syndrome” he’s had throughout his adult life, now taking the Ugly Duckling persona to the stage. He believes he’s sensitive to a woman’s needs, but – due to many past failures – he also somehow winds up saying the most insensitive thing at the worst possible moment. Why does this happen? Guess you’ll find out at the show.

Harris Peet is not only a hilarious comedian and actor; he was also the L.A. Kings’ practice goalie for over a decade taking many pucks to the head. Peet was one of the regular voices on the cult animated hit series “The Ren & Stimpy Show.” He has appeared in countless films, including “The Five Heartbeats,” “Blankman” and “Reign Over Me.

Also appearing nightly inside the Laugh Factory as resident comedians is Tommy Savitt, with show times at 5:00 p.m. most nights, and 7:00 p.m. on Monday and Friday evenings.  World famous impressionist Rich Little, appears nightly at 7:00 p.m. except on Monday and Friday when he takes off for points unknown.

The parade features more than 70 entries, including traditional floats, Macy’s-style giant inflatable balloons, American military heroes, bands, musical groups and a variety of kids’ favorite storybook and cartoon characters.  More than 2,500 people are participating in the parade and more than 500 volunteers from dozens of local schools and community This year, several new entries are added to the parade roster, including “Avengers: America’s Mighty Heroes,” “The Fourth Awakens—Tribute to Star Wars,” “Pac Man Fever,” “Dream Big with the Princesses” and “Ferris Bueller’s Independence Day Off.” groups are assisting with parade operations. More than 16,000 cubic feet of helium will be used for more than 25 giant inflatables. The parade begins at the corner of Hillpointe Rd. and Hills Center Dr. in The Trails village of Summerlin. Participants travel south toward Village Center Circle, then west on Trailwood Drive. The parade ends prior to the corner of Trailwood Drive and Spring Gate Lane.

Returning to the parade include fan favorites “Aladdin’s Magic Carpet” float featuring characters riding a flying carpet; “The Greatest Generation” push-float; “Frozen Fun” float complete with live characters and snow; “Monsters University” push-float; Neon City Garrison Star Wars costuming club; Danza Del Carrizo Native American performing group; the Palo Verde and Spring Valley High School marching bands; and “A Salute to the Military” float featuring service men and women from Nellis Air Force Base. Members of the American Legion, Marine Corps League and the Military Order of the Purple Heart will also participate in the festivities. The parade is organized by The Summerlin Council, the non-profit arm of the Summerlin Community Association dedicated to the social, educational and recreational enrichment of residents. The parade is open to the public. Everyone is encouraged to arrive early, bring water and wear sunscreen.

”Clint Holmes: Between the Lines” will debut in the newly redesigned Palazzo Theatre on July 16, furthering the resort’s commitment to a broad spectrum of new entertainment offerings. Holmes latest adaptation, which will run Tuesday through Saturday at 10 p.m., is a culmination of all the artist has gleaned throughout his impressive career. Promising a personal, melodic journey of contemporary hits and traditional standards, as well as original music written by Holmes, his objective was to create a show that “connects with the soul of the audience,” regardless of age or musical preference.  “Sometimes when we hear a song, we just concentrate on the words or the notes,” Holmes said. “But if you look closer between the lines of the music, there is deeper meaning that creates beautiful shared experiences.”

Holmes will be accompanied on stage by a seven-piece ensemble band including pianist and musical director Christian Tamburr, guitarist John Wedemeyer, saxophonist Rocco Barbato, drummer and percussionist Jakubu Griffin, bassist Dave Ostrem, keyboardist and vocalist Jamie Hosmer. Clint will be joined on stage by Cuban-born  singer and dancer Noybel Gorgoy, who most recently was featured as the lead singer of the “gypsy” jazz band Hot Club of Las Vegas. 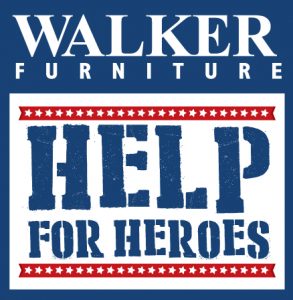 There is one week left to send recommendation letters to Walker Furniture for the company’s third annual “Help for Heroes” program to help wounded U.S. Military personnel and veterans in Clark County who need specialized furniture. Again this year, the program will provide some relief for 10 active military personnel and/or veterans. The “Help for Heroes” program relies on letters from the community describing the situations of prospective recipients. Walker Furniture will provide certain necessary items that are not generally available through the U.S. Department of Veterans Affairs, such as lift chairs, adjustable beds, new mattresses, dining sets and a variety of other possibilities. Each delivery will be specific to the needs of each recipient. The deadline for submitting a letter is Thursday, June 30.

“We need to remember and acknowledge what these men and women have sacrificed and done for us,” said Larry Alterwitz, CEO for Walker Furniture. “The Veterans Administration helps them but is limited in what they can do beyond their medical needs. This is a chance to help a veteran and to say Thank You.”

Letters received by Walker Furniture will be reviewed and evaluated by an independent panel headed by Commander Tim Gomez of the American Legion Paradise Post 149. The post commander and post members will personally visit each prospective recipient to evaluate their individual needs.  The furniture items will be delivered shortly after a special presentation event, to be held on Saturday, July 9. 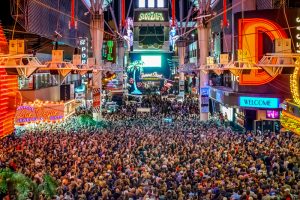 Fremont Street Experience’s Rock of Vegas summer concert series will feature a free concert on Independence Day Weekend from Cherry Poppin’ Daddies, Saturday, July 2 at 9 p.m. on the 1st Street Stage. The popular ska-swing band will play everything from their breakout hit “Zoot Suit Riot” to songs off their newest album The Boop-A-Doo. “Cherry Poppin’ Daddies brings a fun and exciting atmosphere that our visitors love and we are excited to have them perform for a second year,” Thomas Bruny said, Director of Marketing of Fremont Street Experience. “From free concerts to value-oriented hotels, gambling and dining, Downtown Las Vegas has the best deals in Las Vegas. There is something for everyone to enjoy.” Celebrating its eighth season, the free concerts have become one of the most popular summertime events in Las Vegas. This year’s lineup will turn the legendary downtown Las Vegas entertainment venue into summer’s alternative destination through Labor Day weekend with a free concert series that showcases a stellar lineup of bands that have taken music to the edge.

What lies beneath the Nevada National Security Site, once known as the Nevada Test Site? The answers you get depend on the people you ask and many of the responses will certainly surprise you. Recently, scientists have discovered that the site itself sits at the epicenter of the Alamo Impact. Find out more about this titanic collision during the next installment of the National Atomic Testing Museum’s 2016 Distinguished Lecture Series! On Thursday, June 30, starting at 6:00 PM with an informal meet and greet, the museum will be hosting a special Asteroid Day presentation from Ben McGee, a popular TV personality and local geoscientist. Asteroid Day encourages an awareness of the very real threats that asteroids and comets in the Solar System pose to human civilization.  During his 6:30 PM talk, Ben will share personal insight into the new and unfolding evidence of an ancient, civilization-ending explosion, which left a hole in present-day Nevada nearly a mile deep and more than a hundred miles wide. Complementary light refreshments and snacks will be served to guests.

Cherry Poppin’ Daddies became a popular act during the swing revival of the late 1990s although the eight-piece band had formed one decade prior in Eugene, Oregon. The current lineup includes original members Steve Perry (who once performed under the mad scientist stage persona of “MC Large Drink”) on lead vocals, bassist Dan Schmid and trumpeter Dana Heitman.