“These figures are more realistic than I am! I walked up to Robert Downey Jr. (as Tony Stark) and expected him to talk to me. What a thrill! This new theater is spectacular,” raved Lee. And this writer agrees. The new exhibit is, without question, remarkable, with some of the fantastic wax figures so darn perfect, you totally think they are going to talk to you. They are truly amazing.

The new theater now enables guests to see Thor, Iron Man, Captain America, and Spider-Man save the world from destruction. For the first time, they will be able to see, hear and feel the Super Heroes save the day. The theater is the grand finale to the nearly total renovation that took place over the past two years. The all-new attraction now offers an array of show-stopping new interactive experiences, and a selection of newly added A-list celebrities for every fan. With stunning renovations to seven uniquely-themed rooms, and the addition of the Marvel 4D Theater, the completely refurbished and redesigned attraction ushers guests into a series of unforgettable celebrity encounters. The renovation and expansion were designed to enhance the visitor’s experience from start to finish.

“It was an honor to have Stan Lee cut the rope to unveil our brand-new attraction. We are equally as thrilled to now share this with new and repeat guests alike. We pride ourselves on keeping the attraction contemporary and relevant. We know our customers will thoroughly enjoy this new experience,” Rosita Chapman, general manager, Madame Tussauds Las Vegas, said.

One of the key differentiators with Madame Tussauds Las Vegas is not only the life-like, true-to-scale celebrities, but also the vast interactive experiences. Become part of Wolf Pack, from “The Hangover,” by visiting Bradley Cooper inside the infamous hotel room. Become an instant celebrity while sitting in the hot seat during a Jerry Springer taping. Take a place among NASCAR royalty next to Dale Earnhardt. Sing for Simon Cowell — but be ready to be critiqued — or just sing along with musical icons such as Katy Perry, Rihanna, and Madonna. As for the brand-new lineup of Marvel Super Heroes — the greatly anticipated 4D experience serves as the capstone on Madame Tussauds’ transformation. See iconic hero Samuel L. Jackson as Nick Fury, joined by Tony Stark and Iron Man, Captain America and Thor. This lineup of Marvel figures is the largest of its kind to be seen in one room at a Madame Tussauds, and is on display for a limited engagement through December. Next month, more figures are arriving, including Spider-Man and The Incredible Hulk. 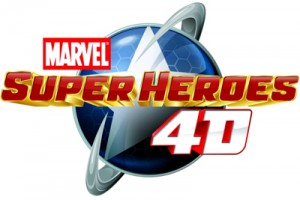 To round out the Marvel experience, step into a pulse-pounding, 70-seat theater that debuts the dynamic Marvel Super Heroes 4D film. The action spills out of the screen over the audience with thrill-enhancing sensory special effects—from water sprays and smoke clouds to tremors beneath the feet. And, gang, be prepared for the spray of mist to the face. Ladies, not to worry, it will not damage the makeup, or the dress. It is really a neat experience and one you do not want to pass up. The film was created by one of the leaders in CGI feature films and 4D attractions, Threshold Animation Studios. For the theater experience itself, Madame Tussauds Las Vegas worked in partnership with SimEx-Iwerks, which specializes in designing, building and operating special F/X driven cinematic attractions that feature blockbuster contents from the world’s major film studios. They build successful partnerships that provide 4D Experience, films, and services,  to more than 150 attractions in 30 countries. The Marvel Super Heroes figures were created by Madame Tussauds’ creative team, and brought to life by a team of sculptors who worked closely with Marvel. The creation of the figures began in 2012, and took countless hours to complete. As with all Madame Tussauds figures, the Super Heroes are “true to life” to the dimensions of the actors and costumes featured in the Marvel blockbuster films.

Las Vegas Motor Speedway will kick off NASCAR Champion’s Week in Las Vegas with a “fanfest” at the Fremont Street Experience on Wednesday, Dec. 4. This will be the first event involving the 12 Chase drivers during this year’s celebration of the NASCAR Sprint Cup champion. The event is free to the public.  The highlight of the event will be a Deal or No Deal-type show involving the 12 Chase drivers. “The fanfest has become one of the top highlights of NASCAR Champion’s Week,” Chris Powell, LVMS president, said. “This downtown event allows fans to get close to the drivers, and gives them an opportunity to see the drivers in a much more laid-back environment without their fire suits and helmets. This is one of the best fan events in NASCAR. We’re very appreciative to our friends at Boyd Gaming, Sprint, and Coca-Cola, who make it possible for us to put on this show and to keep it free for everyone.”

The event, which will be held on the Third Street Stage on Fremont Street adjacent to the Fremont Hotel and Casino, will begin at 1:30 p.m. The drivers will walk a red carpet through the crowd en route to the stage. The speedway and Sprint also will be helping choose six fans who could win big prizes if their team of drivers wins the game show. Fans will be selected through social networking and media promotions, and two lucky fans will be chosen on site to be matched up with a racing pair. The fan paired with the winning team will receive tickets to Friday’s Champion’s banquet at the Wynn Las Vegas,  as well as weekend suite passes for the March 7-9, 2014 NASCAR Weekend at LVMS.

Win-Win Entertainment, a local nonprofit organization that pairs performers with charity events, celebrated its second annual fundraiser show, “Headliners Bash,” presented by the John C. Kish Foundation at The Quad Resort & Casino on Friday, Nov. 22. Hosted by Clint Holmes and Kelly Clinton, the event featured performances by Taylor Hicks and Jersey Boys from Paris Las Vegas, Mac King and Million Dollar Quartet from Harrah’s Las Vegas, Frankie Moreno from Stratosphere, Human Nature at The Venetian, the KriStef Brothers from “America’s Got Talent,” Frank Marino’s Divas and Recycled Percussion from The Quad, Bally’s Las Vegas headliner Véronic DiCaire, and Win-Win’s founder, The Quad headliner, Jeff Civillico. With more than 500 supporters in attendance, the “Headliners Bash” raised more than $40,000 from ticket sales, and silent auction items, including a private cabin on the Las Vegas High Roller, a guitar signed by multiple rock stars, and one lucky winner won “the mother of all ticket giveaways” – two tickets to Elton John, Rod Stewart, Shania Twain and Celine Dion at The Colisseum at Caesars Palace. The monies raised will help Win-Win’s fundamental work within the Las Vegas nonprofit community, and fund other nonprofits with their fundraising events through 2014. Founded by Civillico in July 2011, Win-Win Entertainment has arranged 25 events for nonprofits, including Spread the Word Nevada, Natural History Museum, Lili Claire Foundation, the Shade Tree, and Grant a Gift Autism Foundation.