One of the stars in the CBS sitcom “Superior Donuts,” Maz Jobrani, will be making his Las Vegas stand-up debut at the World-famous Laugh Factory, located inside the new Tropicana Las Vegas, Saturday June 30, through Tuesday, July 3, with special 8:30 p.m. shows only. His supporting acts will be Brian Scolaro and Matt Fulchiron June 30 and July 1, with Raj Sharma and Omid Singh taking over July 2-3.

Personally, I never missed a showing of his very funny comedy on CBS. It was a good show with a tremendous cast consisting of Judd Hirsch, Katey Segal, Jermaine Fowler, and David Koechner. Maz’s first original NETFLIX standup special “Immigrant” was filmed at the Kennedy Center and is currently available for streaming. He has also put out three other solo specials on SHOWTIME including: “Brown and Friendly”, “I Come in Peace”, and “I’m Not a Terrorist, But I’ve Played One on TV”. In the Spring of 2016 he performed at the White House where he had the privilege of introducing Michelle Obama. He was a founding member of The Axis of Evil Comedy Tour, which aired on Comedy Central in 2007.

Maz starred as the title character in the award-winning indie comedy, “Jimmy Vestvood: Amerikan,” a film which he co-wrote and co-produced and is now available on all major outlets online. He has co-starred in many films including Disney’s, “The Descendants,” Sydney Pollack’s “The Interpreter,” and Ice Cube’s “Friday After Next.”

With over 50 guest star appearances, Maz can regularly be seen on television’s most popular shows. Guest stars include “Greys Anatomy,” “Curb Your Enthusiasm,” “True Blood,” and “Shameless.”  Jobrani is a regular panelist on NPR’s ”Wait Wait Don’t Tell Me,”  and has given two TED Talks.

His LA Times Best Selling Book, I’M NOT A TERRORIST BUT I’VE PLAYED ONE ON TV, was published by Simon & Schuster. Maz executive produced “Everything Must Change,” a documentary about his sister’s battle with breast cancer which is currently available on iTunes.

An American Tribute to three of the greatest icons in popular music history will be coming to the South Point Hotel & Casino on Friday, July 6 for a three-night stay, titled “American Trilogy.” It’s not new to Southern Nevada or the South Point, as it’s creator Rob Garrett first performed the show back in 2013, and it’s become a regular now at the South Point. It brings together three of the greatest and most beloved entertainers: Frank Sinatra (Gary Anthony), Elvis Presley (Justin Shandor), and Neil Diamond (Rob Garrett).

What distinguishes American Trilogy from other tribute shows is that these three particular performers have either collaborated or connected in one way or another during their prolific, illustrious careers.  The show will focus on the mutual respect and admiration the men had for one another and the love and gratitude they shared for their country. They personified the American Dream, becoming three of the biggest megastars of our time. In addition to performing solo segments backed by a live band, the show includes interaction between each of the performers before the audience gets treated to the ultimate trifecta as the stars unite for a moving, upbeat, patriotic finale.

“It’s a scripted show,” Garrett explained. “There is dialogue throughout the show, as they reference to a certain event, or a particular song. It all takes place as if they had just come together for this one special event. It’s very modern and based on the fact that the three guys actually connected during their lifetime: Elvis on Sinatra’s television show, and Neil through his music over the years. My concept was what it would’ve been like if they actually did come together for a special salute to America.”

Justin Shandor is considered one of the best Elvis tribute artist going today and is a winner of “The Ultimate Elvis Contest” held annually in Memphis, and has been on all the national talk shows, and he had the honor of performing with Elvis’ back-up band, The Jordanaires on numerous occasions.

Gary Anthony has been singing Sinatra since he was a youngster growing up watching his dad directing big bands back in the ‘50s and ‘60s. Early in the ‘90s Gary took to the stage as a way to pay tribute to his love of everything Sinatra. Today he is considered by many as the ultimate re-creator of the sounds of “Old Blue Eyes.” 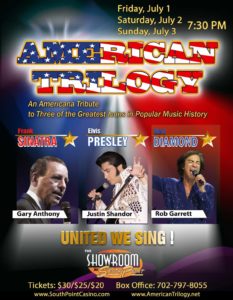 And Rob Garrett first saw Diamond when he sat in the audience with his mother watching Neil making his Las Vegas debut opening the Theater for the Performing Arts  at the Aladdin Hotel/Casino in 1976. I’ve written about the relationship between the two men (who incidentally have never met) over the years, when he does his tribute performance dedicated to Diamond, who just recently announced that he would not be doing any more live performances.

The entire Las Vegas valley is invited to celebrate Independence Day at the 24th annual Summerlin Council Patriotic Parade, Southern Nevada’s largest and most colorful Fourth of July parade, Wednesday, July 4, 2018, from 9 – 11 a.m.  Parade goers will witness the debut of a brand-new float in this year’s lineup – “Vegas Golden Knights: Vegas Born, Vegas Strong.” The new addition, sure to be a favorite in a community flooded with Vegas Golden Knights pride, enters the parade thanks to the  generosity of “Stars and Stripes Major Sponsor,” City National Bank. All-in-all, the parade features more than 70 entries, including traditional floats, giant inflatable balloons, American military heroes, bands, musical groups, and a variety of kids’ favorite storybook and cartoon characters.  More than 2,500 people are participating in  the parade and more than 500 volunteers from dozens of local schools and community groups are assisting with parade operations. 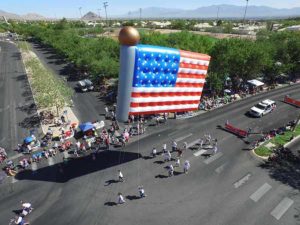 The parade is organized by The Summerlin Council, the non-profit arm of the Summerlin Community Association dedicated to the social, educational and recreational enrichment of residents. The parade is open to the public. Everyone is encouraged to arrive early, bring water and wear sunscreen. Title Sponsor is The Howard Hughes Corporation/Summerlin.  The parade begins at the corner of Hillpointe  Rd. and Hills Center Dr. in The Trails village of Summerlin. Participants travel south toward Village Center Circle, then west on Trailwood Drive. The parade ends near the corner of Trailwood Drive and Spring Gate Lane.

This Fourth of July weekend, the band DORMAN will be the opening act for Kenny Medcalf, an Elton John tribute artist, at the House of Blues on Friday, July 6. Matt Dorman is a Las Vegas-based performing BMI songwriter and will hit the stage at 8:00 p.m., with the opening song, “American,” kicking off the 40-minute set of toe stomping, hand clapping originals.

Dorman proudly states that they’re under construction allowing them to continue building and adding to their growing efforts. The band is being guided by the management and direction experience of Las Vegas producer Jeanne Bavaro, and music talents of Chuck Foley, of UNLV Recording Studio. This concert will feature guest vocalist Valarie Witherspoon and singer-guitar player Betsy Holm. Rounding out the seven-piece band is Victor D’Agostino, Jim Norgren, Paul Badia.

Matt’s first radio song release was “Shadows On The Wall”, released by artist Jerry Hanlon, in 1995, on the UAR Records CD “Living On Dreams, A Songwriter’s Tribute”. His first title cut, “Country Nights”, was released on UAR records and his first number one song, “Dreams”, was released by artist Cheryl K Warner, spent 42 weeks on the Roots International Top 100 chart, and six-weeks at the number one spot on that chart. Matt’s first movie cut was his song “Fear On Fear”, released in the major motion picture “Little Glory”,  starring Cameron Bright from the “Twilight” saga, and Hannah Murray, from “Game Of Thrones”.

Excited to be making  his debut at the House of Blues, Matt is beyond excited to experience this opportunity with his Las Vegas family, and in his own backyard. Check out the bands logo and grab yourself a T-shirt. Meet the new band at the merch booth. You’ll love where he printed the title hit song, “Granny’s Got a Tramp Stamp.”

Well, gang it appears you’ll have a lot of choices this July 4th. I personally will be attending the Trilogy Show as you know “The Man” was and is my man!