Well, gang, I presume you all made it through the Holidays in good shape, and that you had a wonderful time with the kids, grandkids, or even perhaps some great-grandkids tossed in for good measure. I certainly had a peaceful time, visiting with a group of good friends at a very special Christmas gathering that has become a tradition for about 30 years. New Year’s Eve was calm and peaceful as I spent it with my ex-wife, Cathy Bittinger. We had a fabulous dinner at Todd’s on East Sunset, then we waited out the hours, as the big clock and Las Vegas brought in the year 2014. Gosh, weren’t those unbelievable fireworks amazing? I flipped from one channel to another to see which local station was doing the best job. And, I have to be honest; it was hard to pick just one. I thought all four were great. I must say, however, I personally missed Gary Waddell at TV-8. Now, onto what’s happening in our Village beginning with a brand new show on the Las Vegas Strip.

“PANDA!,” an unprecedented theatrical spectacular,  opened at The Venetian and The Palazzo Las Vegas, Tuesday evening (Jan. 7). The new resident show, from acclaimed director An Zhao, arrived for its debut on the famed Las Vegas Strip direct from Beijing, China, where it was produced. PANDA! was produced by a team, whose impressive credits include, the opening and closing ceremonies of the 2008 Summer Olympics in Beijing. The hold-on-to-your-seat spectacle combines high-flying acrobatics, mesmerizing martial arts, music, lots of dancing, and includes a talented cast of award-winning performers from the China National Acrobatic Troupe and Shaolin Monastery Kung Fu Monks Troupe.

“We’re very pleased to present an authentically Chinese show to the international audiences Las Vegas is known to attract,” said Zhao. “We have a wonderful cast of world-class performers whose talent is boundless.”

A new spin on a timeless tale, this one-of-a-kind production artfully mixes traditional Chinese themes with unprecedented theatrical effects.   “If you were awestruck by the opening ceremonies of the Beijing Olympics, this show is for you,” said John Caparella, president and chief operating officer for The Venetian, The Palazzo and Sands Expo.

Show times for PANDA! are Tuesday through Sunday,  7:30 p.m. at The Palazzo Theater. For up-to-date schedule information, including dark dates, or to purchase tickets ($48-$128), visit any Venetian or Palazzo Box Office, or go online to www.venetian.com/panda.

The Dr. Miriam & Sheldon G. Adelson Educational Campus will honor Chemistry Nobel Laureate, Israeli biochemist, Dr. Aaron Ciechanover at the 9th Annual In Pursuit of Excellence Gala on Saturday, Feb. 8 from 6:30 to 11 p.m. at The Venetian Resort-Hotel-Casino.
Dr. Ciechanover will be awarded the Pursuit of Excellence Award, for promoting education as the key to understanding how science and research can benefit humanity. In 2004, Ciechanover was awarded the Nobel Prize in Chemistry along with Dr. Avram Hershko and Dr. Irwin Rose, for discovering the process of ubiquitin-mediated protein degradation. This process expanded the medical field’s comprehension on how a cell operates. When the degradation does not work correctly, diseases such as cervical cancer and cystic fibrosis can develop. This paved the way for the development of drugs against these ailments.

“As a scientist and educator, we are pleased to award Dr. Aaron Ciechanover with the Pursuit of Excellence Award,” said Paul Schiffman, head of school of Adelson Educational Campus.  “Ciechanover has devoted his life to understanding biochemisty and his research made it possible for medical advancements in combating diseases.”

Previous Pursuit of Excellence recipients include: Dr. Miriam and Sheldon G. Adelson, Toni and Victor Chaltiel, Milton I. Schwartz, Beverly and Jim Rogers, Faye and Dr. Leon Steinberg, Sandy and Paul Schiffman, Natan Sharansky, Professor Alan Dershowitz, and Elie Wiesel.
Tickets start at $250 per person and are on sale now. Corporate sponsorships and tables are also available. It is the campus’ mission to never turn a student away due to financial hardship. All proceeds from this event will benefit the school’s scholarship program to provide funds for students in need. To purchase tickets or make a donation visit http://www.adelsoncampus.org/ or contact Davida Sims, director of development at (702) 515-8203.

Jimmy Hopper, “Entertainer of the Year,” is back in Las Vegas at “The Bootlegger Bistro” beginning Friday and Saturday January 10-11, with a dinner show at 9:00 p.m. and a cocktail show at 11pm.  “We are delighted to bring the unique talents of Jimmy Hopper back to Las Vegas,” said Lorraine Hunt-Bono, owner of The Bootlegger Bistro.  “Our family takes great pride in promoting the artistry of talented singers and musicians.  Jimmy Hopper personifies one of the best.  We look forward to his return to Las Vegas and his performances at The Bootlegger.”

Dennis Bono, recording artist and radio music-variety show host of “The Dennis Bono Show from Las Vegas,” recently signed a one year extension to continue his weekly National variety/radio show at Michael Gaughan’s South Point Hotel, Casino and Spa.  “We are happy to have Dennis here at his home at the South Point.  Having Dennis and crew is like having a big family dinner with music and laughter every week,” said South Point Entertainment Director, Michael Libonati. The Dennis Bono Show has been a Las Vegas favorite, delighting audiences for over 14 years.  Dennis is considered by many to be the consummate interpreter of The Great American Songbook.  His warmth, wit and playful personality continues to attract a growing global audience, who are tuning in to share in the music, entertainment and comedy that is the essence of Las Vegas.  The popular radio and internet show, has reached millions around the world and continues to showcase new Las Vegas talent, as well as featuring major celebrities appearing in The Entertainment Capital of the World, Las Vegas. The Dennis Bono Show is recorded before a live audience every Thursday at 2:00 p.m. in The Showroom at The South Point Hotel.  Complimentary tickets to attend the live taping are available Wednesday and Thursdays at The Showroom Box Office, 9777 Las Vegas Blvd. “South Strip”. 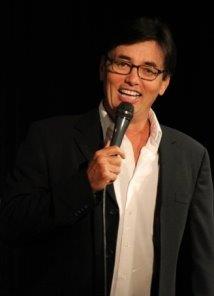 Jackson Perdue will be headlining this week at the Laugh Factory, inside the New Tropicana Hotel Resort on the Las Vegas Strip. Perdue started his comedy career in Hollywood at the World Famous Comedy Store in Los Angeles, Ca., where he honed his craft in comedic storytelling by watching and learning the mechanics, and art of stand-up comedy from the best comedians around the country. As a Japanese-American raised in Arkansas, Perdue used his unique upbringing to create distinct comedy material about various topics including family matters, news headlines, and the mixing of cultures. Perdue’s comedy influences include Richard Pryor, Groucho Marx, Bugs Bunny, and Lenny Bruce. In addition to stand-up comedy, Perdue has also written screenplays and recorded the comedy album, “Half White Trash.” He has appeared on HBO, Showtime and Comedy Central. Show times are 8:30 and 10:30 p.m.