Longtime comedian Paul Rodriguez has been making audiences laugh all over the world (in Spanish and English) for over three decades with his unique brand of humor that is a perfect blend of his Latin heritage, the American dream, and his undeniable universal appeal. As an actor and comedian, Paul Rodriguez’s multi-faceted career includes starring roles and featured appearances in over 45 films and countless television series and comedy specials.

In celebration of Cinco D Mayo, Rodriguez and the Latin Kings of Comedy, featuring Joey Medina, Manny Maldonado and Gene Pompa, will be perform in the new Tropicana Theater (kicking off the Super Summer of headline acts by the Laugh Factory) inside the New Tropicana Las Vegas. The Band of Comedians will perform at 9:00 p.m., Friday May 5, and 10:00 p.m. Saturday, May 6.  Ticket prices range from $39.95 for general admission, to VIP seating at $79.95, plus taxes and fees.

Voted one of the most influential Hispanics in America and awarded the Ruben Salazar Award by The National Council of La Raza (NCLR), the largest national Hispanic civil rights and advocacy organization in the United States, Rodriguez has remained a constant force in his community and the world of comedy throughout his career.

Paul’s film credits include “If” with Ryan Guzman,  “Mission Air” with Tom Arnold, “Without Men” with Eva Longoria, “Cats & Dogs: The Revenge of Kitty Galore,” “The Deported,” “I’m Not Like That No More” with comedian Felipe Esparza (2010 “Last Comic Standing” winner), Disney’s blockbuster hit “Beverly Hills Chihuahua, among others.  The multifaceted entertainer wrote and performed his first-ever one-man show “Just for the Record,“ which is available on DVD. In this tell-all theatrical piece, Rodriguez takes audiences on a journey through his remarkable life, including his childhood in Mexico, to his family’s move to Compton, California (where he grew up).

Rodriguez has hosted several hit series, including the entertainment talk show “El Show de Paul Rodriguez,” an entertainment talk show for Univision which reached over 50 markets throughout the United States and an international audience in over 17 countries in Central and South America. His additional hosting credits include the NCLR ALMA Awards, The Tejano Music Awards, Showtime’s Latino Laugh Festival and his own television specials “Back to School.” As an accomplished writer, director and producer for television, motion pictures and feature shows, Rodriguez has several hit projects to his credit including the comedy concert film “The Original Latin Kings of Comedy,” which he executive produced and starred; the feature film “A Million to Juan,” which he also wrote, directed and starred in; six comedy specials for HBO including “Loco Slam, ” “Live in San Quentin”  and “Idiots and Armadillos.”

Rodriguez’s first big break came while doing comedy warm-ups for Norman Lear’s show “Gloria.” Lear ultimately wrote and developed a weekly series for Rodriguez entitled “a.k.a. Pablo,” which is enshrined at the Smithsonian and holds the distinct honor for being the first television show about a Mexican American family on mainstream American television. Additionally, as part owner of the world-famous Laugh Factory, Rodriguez has participated in the club’s annual free Thanksgiving and Christmas dinners for the underprivileged for over 30 years.

I know for sure that this is one show I personally will enjoy. So, gang, get your tickets early as they will go fast.

For years, when Stewart-Haas Racing (SHR) driver Kurt Busch would head to Talladega (Ala.) Superspeedway or Daytona (Fla.) International Speedway, he’d wonder if the race at hand would be the one – the one in which he’d finally be able to pull into victory lane and complete the checklist of having won at every type of track on the Monster Energy NASCAR Cup Series circuit.

From the shortest racetrack – Martinsville (Va.) Speedway – to a road-course victory at Sonoma (Calif.) Raceway, the driver of the No. 41 Haas Automation/Monster Energy Ford Fusion had won at almost every type of track. He’d won on racetracks ranging in length from .526 of a mile, .533 of a mile, .75 of a mile, 1 mile, 1.5 miles, 1.99 miles and 2 miles. He’d celebrated in victory lane at the high-banked ovals and flat tracks. He’s even had a seat at the head table at the year-end banquet.

But one trophy eluded Busch. He’d won 28 NASCAR Cup Series races, but never a points-paying one at either of the two restrictor-plate tracks – Daytona or Talladega. That all changed in February. After 17 years of trying, Busch was finally able to check that box. And he did it in a big way, by winning for the 29th time in his career, at the 2017 season-opening Daytona 500.

The win was significant on many levels. Not only was it his first win in what is arguably NASCAR’s most renowned race, it was SHR’s, as well. It was Busch’s first race behind the wheel of a Ford, the manufacturer with whom he won the 2004 Cup Series championship, since November 2005. It was the first outing for SHR with the Dearborn, Michigan-headquartered manufacturer. And, for Daytona Beach native Tony Gibson, it was his first trip to victory lane at the famed speedway as a crew chief.

So, while Busch is now one of just a handful of drivers who own victories at each type of racetrack, his focus can shift to winning at each active racetrack on the NASCAR Cup circuit. He’s found his way to victory lane at 15 of 23 active racetracks on the circuit and can now shift his focus to checking those boxes. He’ll head to Talladega this weekend looking to return to his winning ways by putting a check in the win column there.

“It’s so difficult to predict Talladega,” Bush explained. “You can ride around in the back, or charge up front all day and, either way, your day can end with your car on the hook. You just hope to have Lady Luck guide you to a good finish. Restrictor-plate races have turned into this pattern that it is hard to have any type of advantage over any other team. It just comes down to being in the right place at the right time.”

In his first start at Talladega in April 2001, Busch recorded a third-place finish, which happens to be his best at the 2.66-mile superspeedway. He’s finished third there three times since – in April 2002 and 2007, and October 2006. But this time Busch has the confidence he can improve on those results despite not having the same race-winning Ford Fusion he had at Daytona in February. The Daytona 500-winning racecar traditionally goes on display for a year at the Daytona 500 Experience Museum.

This weekend, Busch would like nothing more than to add another win to his already impressive resume. Not only would a victory cross Talladega off his win list, it would also give Busch and his No. 41 team a second victory in 2017 and another five valuable bonus points for the NASCAR Cup Series playoffs. With his postseason eligibility already in place, they can head to Talladega and welcome the opportunity to race aggressively for the win.

Super Summer Theatre will kick off its 42nd season of bringing affordable, high-quality productions to southern Nevada residents with “The Wedding Singer,” performing June 7 – 24 at the Spring Mountain State Park.

Produced by Hynes-Sight Entertainment, this musical version of “The Wedding Singer” (based on the New Line Cinema film written by Tim Herlihy, featuring Adam Sandler) will take you right back to the ‘80s, featuring a totally rad score accompanied by a 12-piece live band. The time is 1985 and rock-star wannabe Robbie Hart is New Jersey’s favorite wedding singer. He’s the life of the party, until his fiancée Linda leaves him at the altar. Shot through the heart, Robbie has hit rock bottom. Enter Julia, a winsome waitress who wins his affection. As luck, would have it, Julia daydreams about marrying Glen, a Wall Street shark; and unless Robbie can pull off the performance of the decade, the girl of his dreams will be gone forever. “The Wedding Singer” will make you wish you were back in the time when MTV played videos, Rubik’s Cubes were all the rage, and you’d never be caught without your acid washed jeans!

The cast of 24 has been rehearsing since March, with three of the actors playing their own music live on stage alongside the band. The production features two songs from the movie, as well as original songs written for the musical which opened on Broadway in 2006 and was nominated for five Tony Awards in 2006, including Best Musical. It has since toured across the U.S. and internationally.

At the helm of “The Wedding Singer” is Joe Hynes, who previously directed the Super Summer Theatre productions of “The Producers” in 2013 and “The Mystery of Edwin Drood” in 2016, with plans to direct another production next summer. He has also acted in several Super Summer Theatre productions since 2008, including “1776” (2008), “The Drowsy Chaperone” (2011), “Crazy for You” (2012), “Chitty Chitty Bang Bang” (2015) and “Lend Me a Tenor” (2015). Hynes has worked professionally in theater for more than 30 years in cities across the country including New York and Miami.

“Super Summer Theatre is the best entertainment value in Las Vegas,” said Hynes. “You can’t beat the price of tickets, and on top of that, you can have a picnic with friends and family outdoors, while enjoying a show against the city’s most beautiful surroundings.”

“’The Wedding Singer’ is a high-energy love letter to the ‘80s, and everyone who sees the show will have an upbeat, great time!” he continued. “There is lots of dancing and excitement, and the cast has so much fun performing. Who knows – some of your favorite iconic ‘80s television and movie characters may even make surprise appearances!”

Tickets to The Wedding Singer and other Super Summer Theatre shows are on sale now.

Brian Newman: AFTER DARK at NoMad Las VegasJuly 22, 2021
Andy James & John Patitucci and Her All-Star Band at the IACJuly 7, 2021
Resorts World Opens on the Las Vegas StripJune 29, 2021
Legends in Concert Returns to the TropicanaJune 19, 2021
Drai’s Beachclub & Nightclub Returns, Plus This And ThatJune 8, 2021
Vicki Barbolak at the Tropicana Laugh FactoryMay 24, 2021 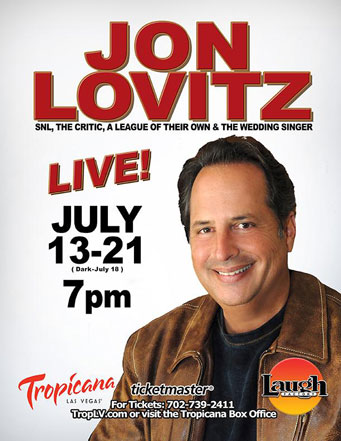 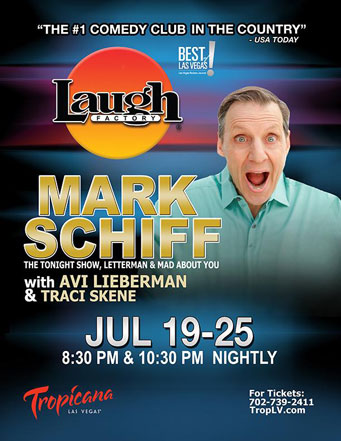 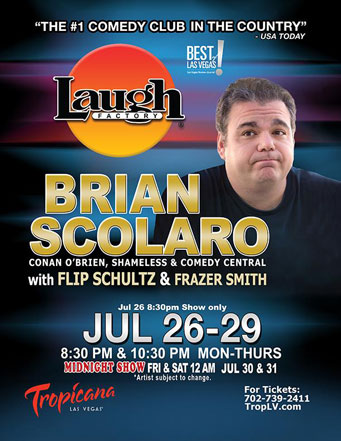 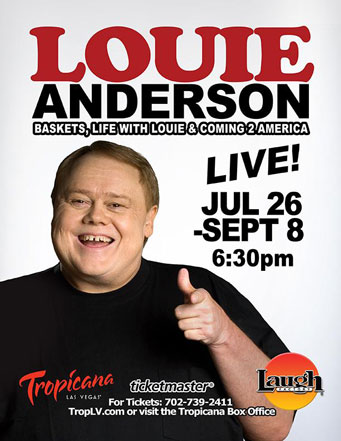 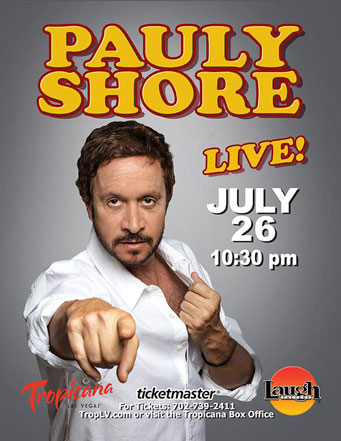