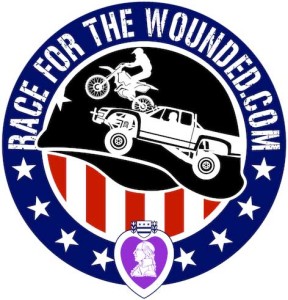 This is a story about a very unusual race team. This reporter first met them in the parking lot prior to the 2014 Mint 400 Race Car Parade down the Las Vegas Strip. I have met a lot of great people in my lifetime, and have met race car drivers from Paul Newman to Rodger Ward, but none compare to the gentlemen of the “Race for the Wounded” team. This is their story, and of course I am personally looking forward to seeing them in the 2015 Mint 400, which kicks off the downtown Las Vegas events on Wednesday, March 11, with a parade of vehicles from the South Point Hotel to Fremont Street, beginning at 3:15 p.m.

And, it’s not every day that you find a non-profit organization that donates 100 percent of the money they raise to the cause they are supporting, yet that is exactly what, “Race For The Wounded,” does, and to top it off, it is based right close by in Thomaston, Georgia. The organization takes wounded military combat veterans on off-road races in an effort to help them integrate back into society through competition, as well as raising awareness to the challenges wounded veterans are faced with on a daily basis. Brett Robinson, founder of the organization, is a veteran himself, having served 20 years in the United States Army, and this particular cause is something very close to his heart.

“Race for the Wounded was founded by and is run by combat veterans, people who know what the racers have gone through and know what they need,” said Robinson. “We know how to deal with them and we understand the structure they need.”

Robinson came up with the idea for the organization while serving in Afghanistan. He was talking with a buddy about wanting to race the Baja 1000, and the more they talked about it, the more he thought it would be a great way to raise money for an organization to help wounded veterans. Originally, he was just going to race and work with a well-known organization that works with soldiers who have been injured in the line of duty. However, as he worked with that company, he soon realized more of the money was going to fund the CEO’s salary of over $300,000 a year, and a $2 million upgrade to the office facilities, rather than helping the veterans. That did not sit too well with him.

After that realization, Robinson decided he would start his own non-profit and make sure that it would be operated 100 percent by volunteers. That way all the money raised would go to help those who have loyally served our country. “Race for the Wounded,” began its journey in 2012, officially becoming a 501c(3) non-profit in 2014. They compete in some of the toughest off-road races in the world, such as the Baja 500, Mint 400, Baja 1000, and the Battle of Prim. More than 20 veterans have participated in the program as of this writing.

To the average person, going on an off-road race in a truck or a motorcycle may not seem like anything more than a fun adventure, let alone something that can help those that have experienced the physical and emotional wounds of war. However, Robinson stated it helps in a number of ways: “In the military everybody has a job and they have to work towards a common goal as well as complete that goal or you will never get to the finish line,” Robinson stated. “All the races we race in are endurance races. They are long and extremely treacherous, so you have to think about the logistics of everything: how to fix things, how to change the tires. There is a lot more to it than just getting in the truck and going for a ride. If any part of the team breaks down, you’re not going to accomplish the mission. It gives them a purpose, a direction; it makes them part of a team again.”

He stated it is that feeling of having a purpose again that is so desperately needed when veterans are trying to integrate back into society, and is something that many struggle with. The story that signifies this most for Robinson is that of Mike Sanchez. Mike is an Army veteran who served for over 10 years. In 2004 while serving in Iraq, Sanchez was struck by an IED and ended up losing both of his legs. Mike came to be a part of a race with the organization and was a co-driver (where he does the navigating) in the truck. After the race was over, he thanked Robinson for giving him the opportunity to be a part of something like that, and Mike later said that if it wasn’t for the people at “Race For The Wounded,” he would probably have killed himself; a statement that still gets Robinson choked up to this day. He noted the horrifying fact that statistics show 22 veterans take their own lives every day, and he hopes that by working with wounded veterans through this organization, they can help to change that fact.

“Race for the Wounded,” currently races both motorcycles, where the veterans get to drive themselves, and a truck that is driven by pro-driver Tony Scott, where the veterans serve as the co-driver, operating the vital navigation system that keeps the truck on course.  Robinson and his crew, which consists of seven other regular volunteers, are working to raise money to purchase another truck which would allow veterans to be the driver, once they are trained to handle something that goes upwards of 140 miles per hour. However, they have to raise $25,000 to do so. He noted one of their biggest supporters has been QC Ranch in Gay, Georgia, which donates proceeds from horse shows that are held at its arena. However, Robinson is hoping to raise awareness about the organization, and the cause, to others who would like to get involved. Robinson stated in addition to funding the efforts to purchase the truck, donations go towards the cost for the races, all of which are paid by the organization. The veterans participate free of charge.

“These races are a lot more strenuous than just a regular road trip,” said Robinson, “but by competing in the race, it lets the veterans know they can do things they thought they couldn’t. There is nothing like seeing their face when they take off the helmet, it is just a huge adrenaline rush.”

Anyone who is interested in finding out more about the “Race for the Wounded,” read bios of veterans who have raced, or would like to donate to the cause, can do so by visiting its webpage, www.Raceforthewounded.com.  All donations are tax deductible.

The Mint 400 announced today that off-road racing legend  “Lightning” Larry Ragland, has been named the Grand Marshal of the 2015 Polaris RZR Mint 400 presented by General Tire. Ragland has had a long and illustrious career in off-road racing, having won every major off road race overall, including The Baja 1000, Pikes Peak International Hill Climb, and The Mint 400. Well known for his smooth rally style driving, Ragland has more overall wins than any off-road racer in history. Larry will lead the third annual Mint 400 Vehicle Parade, in the newly restored racecar he drove and won the 1986 Mint 400 in – down world famous the  Las Vegas Strip to Fremont Street East, kicking off the week of Mint 400 festivities.

“Larry Ragland is a soft spoken man of action. If you didn’t know his history, you would have no idea how much of a bad ass he is behind the wheel. He has raced against and beaten the best. He is the embodiment of a true champion. We are thrilled to have him back representing the Mint 400!” Matt Martelli, Mint 400 CEO, said.

“The Mint 400 is a special race to me.  I have a lot of history racing here. I have had two overall wins and multiple class wins at the Mint. It’s great to see it back stronger than ever with hundreds of racers and thousands of fans!” commented Ragland.

Grand Marshal, Larry Ragland, will be waving the green flag on race day – at the start of “The Greatest Off Road Race in America”. Over three hundred and thirty off road race vehicles will compete in the Mint 400 this year – making it the largest off road race in North America. The Mint 400 includes four spectacular days of festivities on historic Fremont Street in downtown Las Vegas, leading up to the epic 400-mile battle!  “The Great American Off-Road Race” is just around the corner.