I first met Marty Allen around 1957-58, not to sure exactly, but I do remember being at a Hollywood movie studio as a reporter when he and his partner, Steve Rossi, were signing a three-picture deal with the studio. It was big news at the time. Then I ran into the two of them, when Joe Louis (the former Heavyweight Champion of the World) and I were at a Los Angeles TV station to appear on the Nat King Cole show. Nat was a wonderful host, and always had Joe on when we were promoting a fight. What a great guy. Like Nat, Marty was the kind of a person that once he met you, he never forgot you.

Then when I moved to Las Vegas in 1965 as a featured sports columnist at the Las Vegas Sun, we hooked up once again. I always looked forward to new show openings on the Strip because I knew Marty would be there. And, when he would see me, or I saw him, we would greet each other, and he would always have a new joke to tell me–“Hey, Norm, I got a new joke for you…” Then he would proceed to tell me the joke. And, they were always new!

Marty Allen and his wife, Karon Kate Blackwell, were just super people, and the two of them had a wonderful life together, appearing all over the world as a comedy team.   Karon was a musical star prior to teaming up with her Bushy Haired partner, and the two were just perfect together on and off the stage.  It’s hard to believe that they will not be working together on a stage somewhere. One thing about Marty was I never thought he would die. Heck, he survived World War #II, where he was a hero and should’ve been killed there. Allen was a survivor. He was a great funny-man. In their heyday (Allen and Rossi) had the world at their feet, appearing on all the major television shows including more than 40 times, I believe, on the No.1 variety show, CBS-TV show, “Toast of the Town” with host Ed Sullivan.

I recall when the two guys re-united at the old “Vegas World”, now better known as the Stratosphere around the late ‘80s for a run in the showroom there. Rossi also hosted a radio show emanating from the hotel. However, the chemistry was not there, and they parted ways again. There never was any bitterness between the two men. As far as I knew they remained good friends until Rossi passed on in 2014.

The heavens now have another comedy team to make the heavens laugh 24 hours a day.  Heading the line to greet our friend, Marty Allen, is Steve, and the other great comedy teams of Bud Abbott and Lou Costello, Amos and Andy, Laurel and Hardy, The Three Stooges, Martin and Louis, and The Marx Brothers to name just a few, who have been waiting for “Hello Dere” to arrive. Sleep Warm my friend. You are greatly missed by many.

Another wonderful entertainer left this world and very possibly joined up with Marty as they headed for the Golden Stage in the Heavens: Vic Damone, one of the fine baritone singers from the ‘40s through to the end of his life last Monday. He and Frank Sinatra were good friends, and in an interview, Vic admitted that he tried to mimic Sinatra. As he became better known, and sorta joined a list of Italian singers who dominated the air-waves, Sinatra praised Damone as one of the purest singers in the business; “He has the best pipes in the business,” Frank is quoted as saying.

I met Vic a couple of times when he appeared in our little village. The last time I remember being with Robert and Vera Goulet when he was appearing at the Golden Nugget downtown. He sang a number of his hits: “Again,” “Your Breaking My Heart,” “On the Street Where You Live,” and of course the biggie, “An Affair to Remember” from the 1957 movie starring Gary Grant and Deborah Kerr.

Like all the stars who leave us, they are greeted at the Golden Stage by their Peers. And you can believe that the first guy to greet Vic will be his friend, Sinatra. Also, in that line will be Perry Como (who also helped Damone get a job with a band during his early days), and Dean Martin.

Tickets to Las Vegas Motor Speedway’s 2018 Pennzoil 400 NASCAR Weekend, which runs from March 2-4, will be part of the giveaways, and racing fans can enjoy seeing the 60th “Great American Race” in fun and festive atmospheres at the participating casinos.  The free viewing parties begin at 10 a.m. Pacific Time, and the Daytona 500’s green flag is scheduled to drop at 11:30 a.m. Lotus Broadcasting will provide hosts and DJs for the viewing parties from its array of radio stations as part of the festivities. Alex Bowman will start from the pole after topping 2016 Daytona 500 winner Denny Hamlin and others in qualifying this past Sunday, while Las Vegas native Kurt Busch is the defending champion after a thrilling last-lap pass when Kyle Larson ran out of gas a year ago.

The Daytona 500 kicks off the 2018 NASCAR season, which continues the following weekend at Atlanta Motor Speedway before heading west to Las Vegas Motor Speedway. LVMS’ first tripleheader of the year begins on Friday, March 2, with Stratosphere Qualifying and the Stratosphere 200 NASCAR Camping World Truck Series race, continues with the Boyd Gaming 300 NASCAR Xfinity Series race on Saturday, March 3, and concludes with the Monster Energy NASCAR Cup Series Pennzoil 400 presented by Jiffy Lube on Sunday, March 4. Various ticket packages, fun extras and special-access passes for LVMS’ first NASCAR weekend of the year are available at www.lvms.com or by calling 1-800-644-4444. 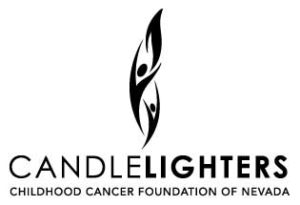 In a nod to the Olympic year, Candlelighters’ children and their parents, paired with local celebrities and community first responders, passed a lit torch every quarter-mile along the length of Las Vegas Boulevard ending at the Downtown Container Park on Fremont Street where a final cauldron was lit honoring every family Candlelighters has touched over the past 40 years. The flame is symbolic of Candlelighters’ cancer journey.  Following the final ceremony, which was presided over by host Mark Shunock, Candlelighters families enjoyed a performance from local band, Lonesome Highway, as well as face painting and other children’s activities at Downtown Container Park.

The Candlelighters Childhood Cancer Foundation of Nevada torch relay was just the start of what promises to be a big anniversary year for the nonprofit. With the aim of increasing both awareness for the organization’s cause as well as funds to support families in their fight against pediatric cancer, there are many ways to support Candlelighters’ mission. Annual events include the popular Super Hero 5K, Camp Independent Firefly and the annual ShineGOLD for Cancer campaign in September. Candlelighters’ next large event will be the Evening of Hope Gala on Saturday, March 10 at Enclave Las Vegas. Celebrating all of Candlelighters’ children and their families, Evening of Hope includes a fun night of art, entertainment and the finest culinary delights from across the Las Vegas Valley. Tickets may be purchased by visiting CandlelightersNV.org. 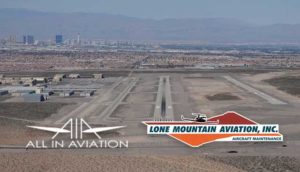 Designed by Architectural Civil Group, the complex will include 9,000 square feet of office space, five training rooms, a full-size classroom, a library, a 16-person conference room, an avionics workshop, a pilot shop, a parts department and a 22,000 square-foot maintenance hangar for Lone Mountain Aviation’s services. The project is now in full-engineering phase, which takes approximately 2-3 months to complete before the city awards the building permit. Currently located at North Las Vegas Airport (VGT) and Henderson Executive Airport (HND), All in Aviation hopes to break ground on the expansion in May, and open in December of this year. Among the 24 hangars, the facility will offer 12 “T” hangars, capable of storing small personal aircraft like a Cirrus SR22, and 11 box hangars, able to accommodate mid-size business jets. Pre-leasing of coveted hangar spaces is underway, and currently at 35% occupancy. More information is available at www.hndhangars.com.

Well, gang, I want to thank all those who wished me Happy Birthday today. It really does mean a lot to me, and my family.