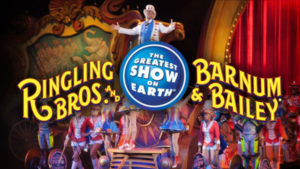 I don’t know about you, but I will miss the Ringling Brothers Circus. And here’s why. When I was, a wee little boy growing up in South Los Angeles, my parents would always take me every summer to see the big circus in a huge tent. It was always located on this big empty lot in downtown L.A. near the train depot. Yes, there were a lot of great big empty lots in downtown Los Angeles in the 1940s. As I grew older, I couldn’t wait to catch the red-car by myself (a special trolley system that used to run all over Southern California until they replaced it with a bus system and more smaller, slower yellow electric trolleys) and go downtown, then walk for a few blocks to the huge empty lot, where the circus tents were being stretched out on the ground. I would volunteer to help in the stretching, and anything else I could do. I even remember (as I got older and the trainers would remember us) I got to help feed some of the animals. I would get a couple free tickets for my work. I was about 10 or maybe 12 years old, and World War II was still going on. But the circus and those beautiful animals came every year.

The first circus I can remember was the Ringling Brothers and Barnum Bailey Circus. The star of the center ring (circuses had three rings in the center of a huge tent), was Frank Buck, a famous tamer and hunter of big game. He had a huge gorilla that was billed as “the most terrifying living creature” named Gargantua the Great.

My gosh I was blown away at the size of the elephants also. The ring master appeared to be huge too. Everything seem gigantic to my young eyes. I sat in the bleachers with my grand-mother and watched those beautiful ladies ride white horses, elephants, and parade around the edge of the bleachers. The clowns, oh how in the world did they fit into that little house they came out of? Everything was just so fantastic to my eyes.

Following the war another great circus owned by the world-famous lion tamer, Clyde Beatty, began coming to Los Angeles. He would use the same lot used by all the travelling circuses, as it was near the railroad depot downtown. The elephants, and horses would always parade from the train depot to the lot which was a big thing to watch—as a kid I would always try to be there for the parade and would run alongside as we headed for the lot. So, during a regular year I would get to go see at least three circuses. Eventually, like all of us youngsters at the time, the circus was not so important anymore. I was in Junior High and had more important things to do, than go downtown for a couple of free tickets to the circus: Young teenage girls were suddenly more important. There were dances to go to, and movies were cheaper (10 cents on Saturday afternoon).

But the memory of getting dirty stretching the tent, getting hosed down with cold water to wash the dust off my clothes (I learned to bring a pair of shorts and a t-shirt to change into before the work began) still resonates in my mind. And when I watched the news the other night, those wonderful moments during my youth came slowly back to me. Those were experiences today’s kids will never know or see. Gosh those were the really good old days!

One of the most unique stand-up comics working today, Canadian born Jeremy Hotz, who has quickly become a proven international success, will be at the Laugh Factory inside the New Tropicana this weekend, along with headliner Jackson Perdue and host John Crist. With another stellar performance at this year’s Montreal Comedy Festival: Just for Laughs and his sold out Canadian theater tour “What A Miserable Tour This Is….”, as well as performances all over the United States, Europe and Australia, Jeremy continues to grab audiences with his completely original and confused, yet very astute, observational comedy.

Originally from Ottawa, Jeremy began his career performing at local comedy clubs across the country. In 1997, he performed at the Just for Laughs Comedy Festival in Montreal and received a standing ovation after his debut performance at the festival’s prestigious television gala. He returned to the Festival in 1999, 2002, 2003.  Recognition came quick, as American studios and networks showed interest and Jeremy was offered his first of many major development deals. Another highlight for Jeremy was his debut appearance on The Late Show with David Letterman, followed by five appearances on The Tonight Show with Jay Leno. Jeremy has also appeared on Comedy Central with his own half hour special, and was on MTV’s Half Hour Comedy Hour. This past summer, Jeremy filmed a one hour TV special “What A Miserable Show This Is…” for CTV. Hotz is a favorite in theaters and stand-up comedy clubs across Canada and the US, including the world-famous Laugh Factory. Jeremy has also headlined at HBO’s prestigious comedy festival in Aspen, Colorado. 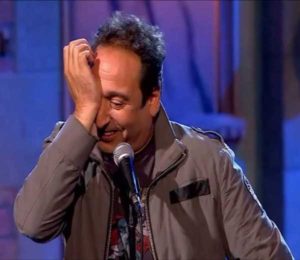 Beyond his stand-up comic merits, Jeremy is also a talented actor who has appeared in the feature films, “My Favorite Martian” (with Elizabeth Hurley) and “Speed 2” (with Sandra Bullock and Jason Patrick). He starred in the four-part mini-series Married Life on Comedy Central and was nominated for a Gemini Award for the CBC’s “OH CANA-DUH“. He was the recipient of a Gemini Award for “Best Performance in a Comedy Show or Series“ for his work in the celebrated series “The Newsroom“ on the CBC and PBS in America. Jeremy was also a staff writer and performer on the critically acclaimed “The Jon Stewart Show.“ In 2008, Jeremy was honored with the Dave Broadfoot, Comic Genius Award at the Canadian Comedy Awards, which is the most prestigious comedy award in the country. Following that year, he was awarded Best Male Stand-Up 2009.

Most recently, after headlining the Melbourne, Sydney, and Auckland Comedy Festivals, Hotz was awarded the Jury Prize – Best International Performer at the Sydney Comedy Festival. 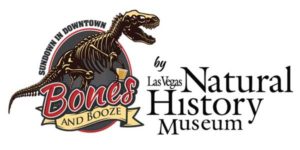 The Las Vegas Natural History Museum’s annual summer soiree, Sundown in Downtown: Bones and Booze, is back for its 6th year on Friday, June 2 from 6 p.m. to 10 p.m.  Hosted at Heritage Park located next door to the Museum, the outdoor celebration features bold rhythms, cold drinks, and small bites from local businesses throughout the valley. Guests can indulge in cuisine from a variety of vendors including El Sombrero, VegeNation, Rachel’s Kitchen, Triple George Grill, Imperial Taco’s and Beer, Popcorn Girl, and more including a beer garden featuring local breweries such as Big Dog’s Brewery, Great Basin Brewer, and Tenaya Creek Brewery. All proceeds will benefit the Museum’s mission; to inspire individuals through educational exhibits and programs to gain a better understanding and appreciation of the natural world.

“Sundown in Downtown is one of those events that the whole community looks forward to each year,” said Las Vegas Natural History Museum Executive Director, Marilyn Gillespie. “We pride ourselves on supporting the downtown community and this event grows in size as a result. Our goal is to raise awareness about the Museum and its mission, and there’s no better way to attract new people and share our message than a party.”

The Las Vegas Natural History Museum opened in 1991 and is a private, non–profit institution dedicated to educating children, adults, and families in the natural sciences, both past and present.  Through its interactive exhibits, educational programs, and the preservation of its collections, the Museum strives to instill an understanding and appreciation of the world’s wildlife, ecosystems, and cultures.  Please visit www.lvnhm.org or call (702) 384–3466 for additional information.

This year’s event is sponsored by, Century Link, Bank of Nevada, The Golden Nugget, Cox Communications, Bank of America Merrill Lynch and more. Tickets to Sundown in Downtown start at $35, which includes all you can eat via food vendors and two drink tickets (additional drink tickets can be purchased for $5 each). VIP admission starts at $55 and includes all you can eat and drink. Couples and party pack VIP tickets are available. Tickets can be purchases here: http://bit.ly/Sundown2017 or by visiting www.lvnhm.org.  Guests must be 21 years of age or older to attend.