Cherry Boom Boom, an awe-inspiring, immersive, engaging and interactive show with a fresh, new and masterful mix of amplified choreography, has announced its new show schedule and ticket prices. Being staged at the renowned Tropicana Theater inside Tropicana Las Vegas, previews for Cherry Boom Boom will run Thursday, Sept. 8, 2016 through Wednesday (with Tuesday dark), Sept. 28, 2016. All shows begin at 9 p.m. and tickets start at $59.

Packing a powerful punch, Cherry Boom Boom is the ultimate playground for sex, music, love and rock-n-roll. Strong and sultry enough for a man; smart and sassy enough for a woman. The movement and music will have heads banging and hips swinging all night long. It is guaranteed to lead to a movement about empowerment for strong, sexy women – with a great storyline threaded throughout a visceral rock-n-roll performance – so it is only appropriate it started with three women rocking their way to the Trop.

The first of its kind, the show brings something new, courageous and tantalizing to The Las Vegas Strip. The cast consists of 12 featured dancers, specialty acts, aerialists “Boomettes,” a musician for live performances and two comedia del arte actors. Various musical acts, celebrity hosts and performers round out the show periodically to surprise with guest appearances. Music for the show will consist of heart-pounding, classic, Americana beats from Rock Royalty including Kid Rock, AC/DC, Lenny Kravitz, Melissa Ethridge, Joan Jett and so many more.

Tickets are available for $59 (General Admission) and $79 (Preferred) plus tax and service fees. VIP seats in the Cherry Pit are available for $99 plus tax and service fees and include preferred seating, a program and a taste of Goufrais (the silky smooth cool treat from Germany).  All tickets can be purchased in-person at the Tropicana Box Office, online at www.troplv.com or www.CherryBoomBoom.com and by phone at 800-829-9034. Cherry Boom Boom is open to guests 18 years of age and older.

In addition, a special Cherry Two-For-One ticket offer will be available for all first responders and military personnel for the preview period of Thursday, Sept. 8, 2016 through Monday, Sept. 19, 2016.  Additional ticket offers include Cherry Deals for Locals (2 for 1 tickets) and Women Crush Wednesdays, featuring $20 off tickets.  Must provide valid ID for local discount and women must purchase tickets in person. Special discounts and/or promotions cannot be combined with any other offer. All tickets are subject to applicable taxes and fees. Management reserves all rights. 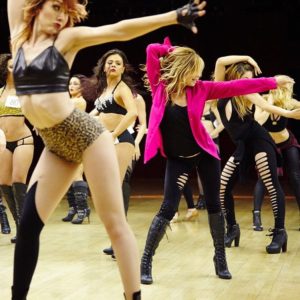 Looking to go “Walking in Memphis,” take a drive down “Route 66,” or get in a “New York State of Mind”? George Bugatti presents “Portraits of America,” a multimedia show guiding audiences through a musical retrospective of songs about the greatest cities in America.  Kicking of his 24-city tour, this evening celebrating songs of America makes its Vegas debut at Cabaret Jazz at The Smith Center for the Performing Arts on Saturday, Sept. 17 at 7:00 p.m.  Tickets range from $39 – $45 and are currently on sale at The Smith Center box office, online at www.TheSmithCenter.com or by phone at 702-749-2000.

Bugatti takes audience members on a tour to places like Galveston, Wichita, Chicago and, of course, Las Vegas. George found inspiration for the musical showcase through the anticipation of the 2016 election. “In a time where politics can divide a nation,” he said, “music has the power to unite.”  The 90-minute show will feature trio Bob Sachs on bass, Paul Stubblefield on drums, and a talented line-up of guest vocalists.  The Las Vegas show of “Portraits of America” features special guests such as “The Marty Allen Show” co-star, Karon Kate Blackwell; Sam Arlen, son of “Wizard of Oz” Composer Harold Arlen; and Nelsen Sardelli, long-time Vegas entertainer and film star.  Based on an idea by Bugatti’s longtime agent, Eric Amada, “Portraits” is the second show developed by Bugatti in his hometown of Las Vegas to tour the country and have a national stage presence. Musical arrangements are by Steve Rawlins and Gary Anderson.

Bugatti is an American singer, pianist, and songwriter with three CDs in wide release.  His latest CD, A Night for Romance was produced by Nigel Wright (Executive Music Producer of American Idol and Warner Bros’ Phantom of the Opera) and is distributed by Universal/Verese Sarabande.  In 1998, Steve Wynn invited Bugatti, Michael Feinstein and John Pizzerelli to open Wynn’s Bellagio Resort in Las Vegas where he recorded Bugatti’s Live on the Strip produced by Paul Anka Productions. His first CD, Oh, What a Night for Love, was produced by Steve Allen of “The Tonight Show” who discovered George at the Peninsula Hotel in Beverly Hills.  Bugatti headlined with his big band at The Sands, Atlantic City and made his NYC debut at Carnegie Hall in 2003 playing piano and singing.  Bugatti is also co-founder, along with Sam Arlen, of The Harold Arlen Foundation/American Songbook Foundation.

After a twenty-five-year absence legendary comedian, actor, producer and director Jerry Lewis returns to the screen in his latest film “Max Rose.” Written and directed by Daniel Noah, “Max Rose” is a deeply moving drama featuring Lewis in the title role–and in every scene–as a retired jazz musician.  Now 87, Max is a one-hit wonder who wrote a popular late-50’s standard called “Hurry Home,” the significance of which gradually becomes clear.  Despite his failure to match that success, Max has led a fulfilling life, thanks largely to a long and loving marriage to his beautiful wife Eva (Claire Bloom).  Her death leaves him totally shattered, shutting himself off as he sullenly refuses to talk to his son and granddaughter.

While going through Eva’s personal things, Max comes across an antique powder compact with an intimate inscription dated 1959 from another man causing Max to now question his entire marriage of 65 years to Eva. 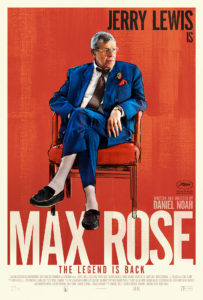 Coping with anger, withdrawal, and his own fragile health, Max tears up the house looking for clues about this secret relationship.  Conveniently, Eva was a sketch artist who drew something every day, so it’s not long before a portrait of a handsome man named Ben turns up, bearing the same date in 1959 as the inscription, along with a note from him. He then embarks on an exploration of his own past, all the while searching for Eva’s Ben, in the hope he can get answers he needs to be at peace. Rounding out the cast of the film are Claire Bloom as Eva, Kevin Pollack as Max’s son, and Kerry Bishé as his granddaughter.  Also starring are Dean Stockwell, Mort Sahl, Illeana Douglas, Rance Howard, and Lee Weaver.  Academy Award-winners Michel Legrand, along with Alan and Marilyn Bergman, have created an original song for the feature, which figures prominently in Max’s life and career.  Rush River’s Bill Walton produces along with Inglee and Kelleher. This movie is on limited run in some major markets now and will be in our little village later this month. Watch for it.

This column will be replaced on 9-9-2016 with a copy of my column first printed on 9-11-2001. I display this particular column every year as a tribute to those who were killed on that ugly day in America, and for those First Responders and others who rushed in to the devastation to rescue who they could and lost their lives. They continue to do that every single day. I just want to remember, as I do all my readers, of what it felt like while we watched the television set that morning and succeeding days. Las Vegas lost a few that day too. They are remembered every year.