This writer took a couple of hours to travel back down memory lane the other night, when we accepted an invitation from a friend to attend a Big Band Concert at the OMD, located in the old Commercial Center on East Sahara. I asked a friend of mine, Cathie S, to travel along with me.  We were told to look for the Green Door, and OMD would be next door. We had no problem, we could hear the wonderful sound coming from the building as we approached the entrance.

I had known Ronnie Rose for a few years, had watched him sing a song or two at benefits, or as a guest performer. But, I had never watched him perform full-out for two hours, until Monday night. And, all I can say, he has a new fan! This man, combined with 17 of the best damn musicians anywhere, put on one of the best Big Band Shows I have seen in many years. It reminded me of my teen years, growing up in San Diego when we would have our high school proms. It was always a Big Band (and sometimes we would get a famous band out of Los Angeles), and I fell in love with that sound.

After returning from the Korean War, I would haunt the various nightclubs looking for that sound. There was one place left in San Diego and it was on Pacific Highway. Heck, I remember seeing and listening to Rudy Vallee, the famous megaphone crooner, around the end of the ‘50s. All the Big Bands played the room, and the more famous ones like Glenn Miller, Tommy Dorsey, Benny Goodman, Harry James, Count Basie, and Duke Ellington would play the ballroom at Mission Beach. All those sounds were there Monday night!

There was so many songs I just sat there and listened, while some of the audience would get up out their chairs and began to swing on the dance floor. Just a few examples of the classics played Monday night included “April In Paris” (Basie), “Luck Be A Lady” (Sinatra), “My Foolish Heart” (Anderson arrangement), “A Man Ain’t Supposed To Cry” (Joe Williams), “It Was A Very Good Year” (Anderson arrangement), “Jump, Jive & Wail” (Brian Setzer version), Bye Bye Blackbird (Sammy Davis, Jr), “Georgia” & “Mary Ann” (Ray Charles), “Do Nothing ’til You Hear From Me” (Anderson arrangement) and the “tear down the house” finale –made famous by Bill Haley and the Comets,  “Shake, Rattle and Roll.”

All that and more. If you were to go to the Strip you could easily spend a hundred bucks, what with parking charges, and tickets for you and another. Yet parking is free at Commercial Center and there is a measly $10 “cover” charge. And, unbelievably, some people even complained of that “cover” charge. The entertainment Monday night was on the level of any on the strip — the audience was not only dancing in the aisles, they were dancing on the tables and chairs!!!

“Since coming to Vegas 10 years ago I’ve played with over a dozen fine big bands with some of the greatest musicians in the Vegas Valley,” Anderson said. “But, this ensemble combines veterans of the strip shows with undergrad & graduate students from UNLV.”  Anderson explained that the band members were chose, not only because of their skill sets (which are amazing in every chair), but because they love the music, and love to see people enjoying the music.”

The Golden Tiki will celebrate its “Terrible Twos” second anniversary on Sunday, July 23 with the debut of Claire Sinclair’s shrunken head.  Guests are also invited to enjoy drink specials, a scavenger hunt, and other festivities from 6:00 to 8:00 p.m.

“The Golden Tiki is celebrating its Terrible Twos, and we’re thrilled to have Claire Sinclair as our first female shrunken head to honor the occasion,” said Branden Powers, The Golden Tiki’s managing partner.  “We’re so thankful to all our guests who’ve contributed to the bar’s success. This celebration is dedicated to you.”

Sinclair, international pin-up icon, Las Vegas headliner and 2011 Playboy Playmate of the Year, will unveil her own likeness as a shrunken head at 6:30 p.m. during the celebration.  Created exclusively for The Golden Tiki’s cabinet of curiosities, the head was sculpted over the course of four weeks referencing photos of Sinclair to ensure physical accuracies.  Powers and The Baron of the Universe, former contestant on America’s Got Talent, will be on hand to present the honor. Guests will also be able to take part in a scavenger hunt around the bar featuring unique artifacts, a mermaid, and fishtail braid bar by Kelly Cardenas Salon, complimentary Tiki punch, and in-house DJ set. There is no cover for the event, but guests must be 21 and over to attend.

In the heat of the Vegas summer, instead of burrowing to stay cool, Winston the Impersonating Turtle is hold up in the Terry Fator Theatre and he invites all Las Vegas locals and tourists to stay cool with him by offering a Summer of Winston ticket discount. Now, through Sept. 30, 2017, fans can receive 40-percent off standard ticket prices (available in sections B, C and D). This offer can be redeemed online, at the box office or by calling 702-792-7777 and using code WINSTONSUMMER.

Fator is also excited to launch a new children’s book “Winston,” written by Sally L. Kirkham, Ph.D., a leader in learning behavior, and illustrated by longtime Fator collaborator Pete Mitchell. The book is centered around Fator’s popular character Winston the Impersonating Turtle. “I love to read, and anything I can do to help educate children and encourage them not only to read, but to discover their talents like I…I mean Winston…does in the book is just awesome,” Fator said. 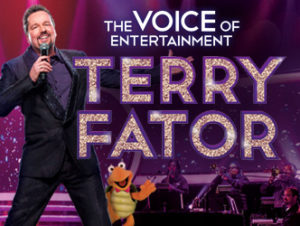 Winston’s adventures take him through the swamp and the ponds, and from daytime to nighttime as he discovers the sounds made by the frogs, birds, owls and more. This journey leaves Winston wondering what sounds he, as a turtle, could possibly make. With practice and patience, Winston discovers his true talent. The book also provides easy-to-use strategies to help children beginning at age five to develop their reading skills, and is the first of an upcoming series of Winston The Impersonating Turtle Tales books.  “Winston” is available online at www.TerryFatorShop.com for $15, plus applicable shipping fees and taxes, or at the retail kiosk outside the Terry Fator Theatre before and after Terry Fator Tonight.

Tickets for Terry Fator: The VOICE of Entertainment presents Terry Fator Tonight at The Mirage start at $59, plus applicable taxes and fees. Tickets can be purchased at the Terry Fator Theatre box office, by phone at 702-792-7777 or 800-963-9634 or online at mirage.com. For more information, visit terryfator.com.

The “Kumukahi” Ukulele and Hula Festival will bring the spirit of Hawai’i to Sam’s Town Live! on Aug. 11-12. The festival kicks off the two-day festival on Friday, Aug. 11 at 2:00 p.m. with several fun-filled activities, including performances by Ukulele, Kupuna Group, as well as Keiki Kane, Kupuna, Makuahine, and Wahine soloists.  On Saturday, Aug. 12, festival goers can enjoy more events with Kane, Kaikamahine, Wahine Group, Kane Group, Kahiko,  ‘Auana, Makuahine, and Group ‘Auana. The festival will end with a concert by Kanikapila, featuring Harman-Suganuma ‘Ohana and Mark Yamanaka.

The festivities will celebrate the unique culture of the people of Hawai’i. Hula competitions will be held throughout the festival, and will lead up to the awards ceremony that will be held  Saturday evening.

Well, gang, I’m asking you to get up out that chair, stop watching TV, and to live it up one night, by swinging over to Commercial Center this coming Monday evening at 8:00 p.m. Rose and the Big Band do two long sets. There is a variety of beverages available. You will not be disappointed believe me!