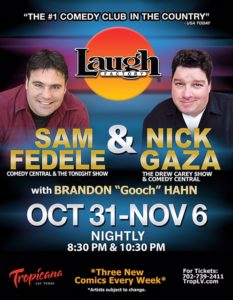 It’s all laughter when Sam Fedele, Nick Gaza and Brandon “Gooch”, Hahn take over the stage at the Laugh Factory, inside the New Tropicana Las Vegas, on Monday, Oct 31, where they will entertain “Ghosts and Ghouls” on Halloween night, and normal comedy fans through Sunday, November 6. The comedy shows in the Laugh Factory bring an amazing, one-of-a-kind brand of comedy not only to the Tropicana entertainment lineup, but also to the Vegas Strip. It doesn’t matter what night of the week or what day of the month it is, the Factory is always full of the hottest comedians in the business – many are superstars from the big screen, others are up-and-coming Las Vegas comedians. Regardless of who is performing, the one thing we know for sure is that you will be rolling on the floor with laughter.

Sam Fedele developed his high-energy style of comedy growing up on the mean streets of New Jersey. Being voted High School Class Clown was the first step in the development of this live-wire act, and he spent the next six years honing his skills in the United States Marine Corps. Fedele’s diversified background and high-energy, clean comedy makes him perfect for any event. He is a comedy club and college favorite nationwide, and can be seen on NBC, Comedy Central, the PAX Network and CBC Television in Canada.

If Nick Gaza looks familiar, it’s because he should. Gaza has appeared on such hit TV shows as “The Drew Carey Show,” “Malcolm in the Middle,” “Becker,” “Dharma & Greg,” “Profiler,” “The Pretender,” Comedy Central’s “Tough Crowd with Colin Quinn” and much more. Gaza’s stand-up comedy career, which has spanned over 25 years, has taken him all around the world from the Las Vegas Strip to the deserts of Afghanistan performing for U.S. troops. Gaza’s comedy is a hysterical mix of true stories and things we can only hope aren’t true. With his strong improvisation background, you can rest assured that each show has a unique flair. Gaza makes fun of everyone and everything; no one escapes the crosshairs of his comedy, including his friends, family, the audience, and even himself

Hailing from Sin City, Brandon “Gooch” Hahn has been in stand-up since 2000. Living in Las Vegas has afforded him the luxury of working with some of the biggest names in the industry, including Pauly Shore, Sebastian Maniscalco, Bret Ernst, Steve Byrne and Larry the Cable Guy. Opening for Larry on numerous occasions has proven that Hahn can rock crowds of all sizes. Big or small, he’s left them wanting more. When he’s not doing stand-up, he’s hosting his own afternoon FM radio show on KOMP 92.3.

This Veterans Day weekend, Fremont Street Experience will host the 4th Annual Salute to the Troops featuring a free concert from Gary Sinise & the Lt. Dan Band. The concert kicks off Saturday, Nov. 12, 2016, at 7:30 p.m. on the 1st Street Stage. There will be an opening performance by country music artist Phil Vandel. Gary Sinise & the Lt. Dan Band will take the stage directly after.

Salute to the Troops is a multi-day trip sponsored & produced by American Airlines, which charters a plane to fly veterans to Las Vegas. The Mirage is the host hotel while in Vegas, and Landry’s Bubba Gump restaurant at Planet Hollywood will be hosting them for a pre-concert dinner. The concert, sponsored by the Gary Sinise Foundation, is free and open to the public. A VIP area will be set up in front of the stage to be exclusively used by approximately 150 veterans and their loved ones from both Walter Reed at Naval Support Activity Bethesda & Fort Belvoir. In addition to the Gary Sinise Foundation and American Airlines, this year’s event is made possible thanks to additional sponsors MGM Resorts International, Fort Worth Airpower Foundation, Greyhound Lines, Golden Nugget Las Vegas, Terry Fator, Landry’s Bubba Gump, and Fremont Street Experience. 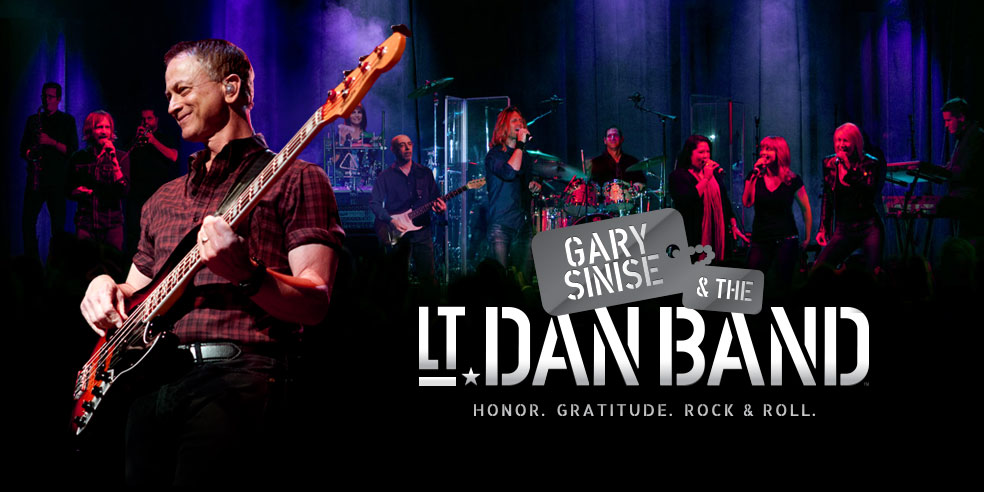 Sinise is currently on the CBS series Criminal Minds: Beyond Borders, played Lt. Dan Taylor in the movie Forrest Gump and went on to star for nine seasons on the TV show CSI: NY. Sinise is founder of the Gary Sinise Foundation, an organization dedicated to helping and honoring U.S. service members, veterans, first responders and their families. A program of the Gary Sinise Foundation, Gary Sinise & the Lt. Dan Band has a singular mission when putting on a concert: Honor. Gratitude. Rock and Roll. His band has performed for troops all over the world. It’s a high-energy performance as the twelve-member group covers hits from classic to contemporary, featuring the songs of Stevie Wonder, Kelly Clarkson, Adele, the Zac Brown Band, and more – there are even swing tunes from the 1940’s. You name it, there’s something for everyone.

Whether boosting morale on military bases at home and abroad, raising awareness at benefit concerts across the country, or headlining a Gary Sinise Foundation’s Invincible Spirit Festival, the band entertains and inspires wherever they go. It’s Gary’s mission to deliver a message of giving back to our defenders with every show.

Walker Furniture will be seeking nomination letters from Oct. 9 through Dec. 4, 2016, to assist individuals and families in Clark County in need for the 23rd “Home for The Holidays” program. As in past years, the search will provide 30 recipients with an entire houseful of new furniture.

Larry Alterwitz, CEO of Walker Furniture, is always pleased to start the holiday spirit of giving with the announcement of the Home for The Holidays program knowing the holidays will be a little brighter for these families. Helping Hands of Vegas Valley is partnering with Walker again as the preliminary committee. Their expertly trained staff will visit and identify the nominated families having the most genuine need. Other partners include Star Nursery providing a holiday tree to each of the 30 families and the Las Vegas Rescue Mission supplying food and toys.

Nominations are made by members of the community writing a letter describing the prospective recipient’s situation and sending it to Alterwitz. Letters typically come from teachers, students, health care professionals, social service workers, clergy, friends, neighbors, and family members including children and grandchildren. Recipients have usually endured a variety of hardships: single-parent households with financial difficulty; families with children suffering from physical or mental disorders; the loss of homes and belongings from fires; and families affected by illness, domestic violence or sexual abuse are just some examples.

Example stories of past recipients include: a single working mother of five unable to provide her family with beds, chairs or a dining table; four minor children being raised by grandparents because their mother was shot and killed by their father; and a single-parent family of five with one child having a brain injury requiring ongoing therapy and the entire family sleeping on the floor.

Letters must be received by Sunday, Dec. 4, to be reviewed by outside, independent panelists. Helping Hands of Vegas Valley, a local nonprofit organization servicing seniors with free assistive services, will read and verify the thousands of letters received. An Executive Committee composed of Mayor Carolyn Goodman, other community leaders and local media personalities will make the final selection for the 30 recipients, who will be notified the week of Dec. 12. Furniture deliveries will begin on Thursday, Dec. 15.

Home for The Holidays is the largest annual charitable endeavor for Walker Furniture, which has a long history of contributing to worthwhile community causes. The program began in1994 with deliveries to 12 families.