Hey, gang, guess what? The original zipline, which I still haven’t taken a ride on (my doctor won’t allow it, darn it), downtown under the Fremont Street Experience, revealed plans to build a new permanent zipline attraction, SlotZilla, Tuesday during a press conference, at which a six-foot model of the attraction was 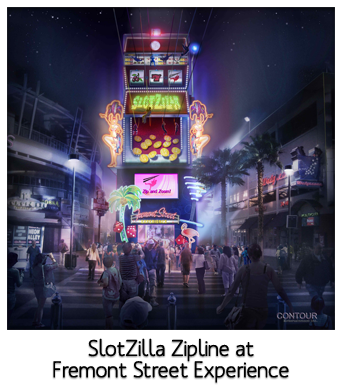 unveiled.  The $11 million attraction will forever alter the downtown Las Vegas skyline, with an 11-story slot-machine-themed takeoff platform located near the intersection of Las Vegas Boulevard and Fremont Street.
Construction on SlotZilla is expected to begin immediately after New Year’s, with the attraction anticipated to open during the first half of 2013.  SlotZilla will be a major new icon for downtown Las Vegas and the Fremont Street Experience, a five-block entertainment district that attracts nearly 16 million annual visitors.

“We wanted to take a ride typically found in the jungle, give it amusement park features and qualities, and build it in the middle of downtown,” said Jeff Victor, president of Fremont Street Experience.  “Designing a zipline to go across 1,700 feet, with only a slight incline, was a real challenge and required us to think outside the canopy and develop new technologies.  To meet this challenge, we designed a first-of-its kind propulsion launch system and created a steeper incline that will actually take riders through the Viva Vision canopy, giving them the thrill of their lives.”

SlotZilla will be a two-level thrill ride.  Riders on the upper Zoomline will take off over 100 feet above ground and riders, lying flat in a harness, will be launched to a speed that will zoom them 1,700 feet through and under the Fremont Street Experience canopy. Riders on the lower Zipline take off about 70 feet above ground and zip 850 feet to a mid-point landing platform. Both levels deliver a ride experience unique in the world – flying above thousands of people on Fremont Street Experience and under the Viva Vision canopy, which is the world’s largest video screen.

SlotZilla, specially designed for Fremont Street Experience by Skyline based in Hawaii, features a first-of-its-kind propulsion launch system which propels the rider from the platform at speeds of 35 mph, as well as a proprietary braking system, giving riders a smooth landing to the ride.  SlotZilla combines innovative technology with a dynamic themed concept to transcend a traditional zipline ride into a ground-breaking attraction for the amusement industry.

“The launched zipline will provide an incredible experience for riders, and is a first for the zipline industry,” said Danny Boren, president of Skyline. “Additionally, this attraction will have increased guest capacity as a result of the integrated ride controls and automated safety features, which are exciting new developments for the zipline industry.”

The new zipline attraction is named “SlotZilla,” as a tribute to the deep gaming roots of downtown Las Vegas.  Through the creative direction of Contour Entertainment, the 120-foot-high takeoff tower will be transformed into the World’s Largest Slot Machine. Riders will actually “be the jackpot” and exit the slot machine through the pay table and coin tray.  Las Vegas visitors will not want to miss this iconic new attraction, a thrilling experience for zipline riders and a one-of-a-kind photo op for those who prefer to keep their feet on the ground.

The takeoff platform is a multi-level, 11-story structure designed to look like a giant slot machine, complete with a pull-arm and reels.  Each time riders leave the Zoomline platform, the arm will pull down, the reels will “spin” and a beacon will light up.  The slot machine is adorned with two Vegas showgirls standing 37 feet tall and will include a 20-foot wide, 10-foot tall “Welcome to Fabulous Downtown Las Vegas” sign, providing a photo op for tourists.

The ride will have two landing platforms.  Zipline riders will land on a platform near the intersection at 3rd Street and Casino Center.  Zoomline riders will land on a platform located on top of a new Main Street Stage.  In order to build this amazing ride, the current temporary zipline Flightlinez is closed for a short time.  This will enable Flightlinez to move the current temporary platforms, so that the ride can remain open during construction of the permanent SlotZilla structure.

Country music chart-toppers, Restless Heart, will perform songs of the season and timeless hits at the Suncoast Showroom, Saturday and Sunday, Dec. 1-2. Celebrating more than 25 years as a group, Restless Heart came together in late 1983 for a project by writer and producer Tim Dubois. He soon brought in Scott 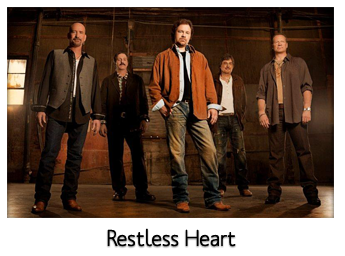 Hendricks to co-produce and engineer the recording project, which quickly lead to a record deal for the band.  Released in 1985, Restless Heart’s self-titled debut included three Top 10 singles on the country charts. Two years later, the group came out with its breakthrough album, “Wheels,” producing four consecutive No. 1 country hits: “That Rock Won’t Roll,” “I’ll Still Be Loving You,” “Why Does It Have to Be (Wrong or Right),” and “I’ll Still Be Loving You,” which crossed over to the adult contemporary charts, and also cracked the Top 40 on the pop chart.  The group is comprised of Larry Steward, lead vocals; Dave Innis, keyboards; Greg Jennings, lead guitar; Paul Gregg, bass; and John Dittrich, drums.  Showtime each evening is 7:30 p.m. Tickets are available from $15.95, plus tax and fees. Tickets can be purchased at any Coast Casinos box office, by calling 702.636.7075, or visiting www.suncoastcasino.com.

As a testament to Imagine Exhibitions’ commitment to the Las Vegas arts and educational communities, 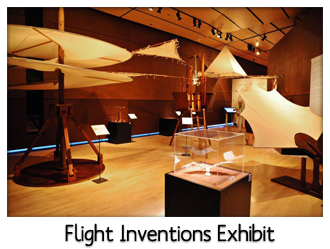 “Da Vinci—The Genius,” is offering free admission for children ages 12 and under, accompanied by a paying adult, throughout the remainder of the
exhibition’s run at The Venetian.  “We wanted to thank the local community for their ongoing support of Da Vinci – The Genius,” said Tom Zaller, CEO and Founder of Imagine Exhibitions. “By offering free admission for kids, both returning and first-time visitors have another reason to experience the exhibition before its limited engagement must close on January 27, 2013.” Da Vinci – The Genius, the most comprehensive exploration of da Vinci’s works ever created, is an enlightening, interactive experience that offers the perfect activity to engage young minds while they are out of school for their holiday vacation. The exhibition also welcomes older students with a valid school ID for a special discounted price of $17.

The 4th Annual Cadillac of Las Vegas Toys for Tots Celebrity Benefit, “Vegas Stars Brighten the Holidays,” will get underway at 7 p.m., with a red carpet event at the LVH Hotel on Paradise, and will include an appearance by Chicago Trick. The benefit will be hosted by Chris Phillips of Zowie Bowie, and backed by the amazing David Perrico Orchestra. So many entertainers are scheduled to perform or appear, including Nicolas Cage, Gordie Brown, Paul Shortino, Trent Carlini, Lorena Peril, Murray SawChuck, Elisa Furr, Frankie Moreno, Pia Zadora, Lydia Ansel, Vinny Falcone, Sandy Kastel, Mark Giovi, Skye Dee Miles, Rob Garrett, Steve Rossi, Robert Nash, Louis Anderson, Carrot Top, Genevieve Dew, The Clark County Children’s Choir, and many, many, more! This is a one of a kind Las Vegas show you won’t want to miss, with so many entertainers performing, plus the chance to salute the US Marine Corps, and all who serve our country. The Nellis AFB Honor Guard will present the colors. Tickets are $19, and available at the LVH Box Office, or by phone or online.  You can get a FREE Ticket by donating a NEW, unwrapped toy of similar or greater value at Cadillac of Las Vegas on West Sahara, or at the theater the night of the show.