On January 22, 2018, just two days short of his 77th birthday, Neil Diamond stunned the music world when he announced his retirement from live performances after being diagnosed with Parkinson’s disease. Diamond has said that he still plans to write and record music, but the iconic performer, who has become one of the biggest selling recording artists and concert draws in music history, has hung up his sparkly shirts and will never perform another live concert.

Diamond’s live performing career now being discontinued may have been disheartening news for his legions of followers which number in the multi millions – however, all may not be lost as there is a ray of light at the end of the tunnel, and that “ray” happens to be a long time Las Vegas performer named Rob Garrett.

Aside from winning numerous awards over the years, Garrett has been critically acclaimed for his uncanny physical and vocal resemblance to a late ‘70s early ‘80s era Neil Diamond, and is arguably considered the world’s most requested, well-known, and respected Neil Diamond tribute artist – so much so that he is very often referred to as the “King of Diamonds”. After watching Garrett perform a few times, I wrote: “Of all the Tribute Artists running around Las Vegas (and elsewhere), there is none better than Garrett,”

On Saturday, May 19, Garrett will make his debut at Myron’s Jazz Cabaret in the Smith Center where he will perform two shows: 6:00 and 8:30 p.m. The show is billed as, “Solitary Man – The Music of Neil Diamond,” with a percentage of the proceeds from ticket sales being donated to “Friends of Parkinson’s,” a Las Vegas group who aids in research in finding a cure for Parkinson’s disease. 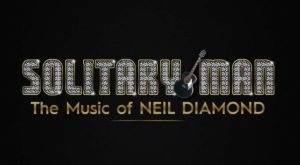 Like his legendary counterpart, Garrett was born in New York City, but in 1974 he traveled west and landed in our little village (Las Vegas), where he stayed and raised a family. Rob has been performing his tribute to Diamond since 1995 and stands atop a very saturated mountain of tribute artist’s in the Entertainment Capital of the World.

However, he has been reviewed by just about every journalist in the country, and without question he has been proclaimed “The Best Tribute Artist to ever work a stage anywhere.” He has become one of the city’s most popular, local, draws whether it be a tribute or non-tribute act. Take it from another reviewer, non-other than Mike Weatherford, former entertainment critic for the Las Vegas Review Journal, who wrote “Garrett does look & sound astonishingly like Diamond.” Rob continues to set the standard in the industry by performing his tribute show of the prolific singer/songwriter around the country in venues usually reserved for nationally named acts.

Just back from his tour throughout Europe this past Spring, and now touring North America on his “Dysfunctionally Yours” World Tour, the stand-up comedian with a single name, Basile, takes over the stage this coming week at the Laugh Factory inside the Tropicana Las Vegas on the Strip.

Basile has been busy with his personal appearances and developing a programming for cable TV.  Fresh from filming his new situation comedy TV show for SpiceRack Entertainment, Basile is perhaps one of the most diverse entertainers in the world!  He has entertained millions of comedy fans in the United States, Canada, Europe, Australia, and Africa. His unique blend of material, improvisation, and characters has made him one of the most sought-after comedians in the entertainment industry today. Basile’s general audience show, “Dysfunctionally Yours” World Tour, is currently touring to sold-out audiences throughout North America. His diversity in entertainment continues as he stars in his critically acclaimed series, “Growing Up Greek in America.” This comedy series is spoken in Greek and English and to date has sold over a million copies and is distributed worldwide.

Basile’s voices and characters have been heard on Armed Forces Radio, Television, and Syndicated Radio as the voice of: “The God Father of Soul, James Brown” in North America, and his comedy segments on XM/Sirius Satellite Radio. Basile has over 100 television appearances throughout the world, including: HBO, Showtime, Comedy Central, A & E, and the Tonight Show on NBC to name a few.

Basile is also known for his voice work as Universal Studio’s Bullwinkle J. Moose, as well as for the Cartoon Network and many Japanese Anime series. Recently, Basile was nominated for an EMMY for his work on ESPN’s “30 for 30” series segment, “The Legend of Jimmy the Greek”, as the voice of Jimmy “The Greek” Snyder, who once lived in Las Vegas, and was a sports columnist for the Las Vegas Sun newspaper, where he would pick the winners of various sports events, back in the ‘60s and ‘70s.

Join Julien’s Auctions in Las Vegas at Planet Hollywood Resort and Casino on June 22nd, 2018 as we celebrate the life and career of legendary Jerry Lewis, the late “King of Comedy.” As part of our two-day HOLLYWOOD LEGENDS auction event, where property from the estate of the legend will be auctioned off in the city where he made his mark as one of Las Vegas’ greatest nightclub performers of all times.

This is an opportunity for us (locals) to pick up a memento from one of our own who left behind a ton of memories and of a great entertainer.

Well, gang, I’ll see ya at the Smith Center on the 19th of this month.