Went over to the Sports Party Mansion the other evening to see what’s going on, and if it would be something my readers would be interested in knowing about. Well, let me fill you in. The Sports Party is the newest and most unique party place in Las Vegas, and is located in the world famous martial arts facility, the RYU Athletic Center, previously the Tapout MMA Training Facility. 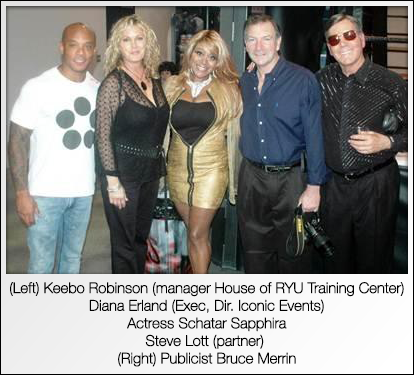 Former executives of Nike have started their own apparel company RYU, Respect Your Universe, and decided to co-brand their name with the famous facility. Steve Lott and Diana Erland are the driving force behind Iconic Events, Inc., the company that is the exclusive agent for the Sports Party Mansion.  The thought of being the first and only sports party venue in Las Vegas was intriguing, so they went on a hunt for the perfect location, one that would afford them space, easy access and meet with their theme, and they found it at, 4040 W. Hacienda, 89118.  Many convention groups coming to Las Vegas for their meetings seek a special venue for special parties– a venue that is “different” and most importantly a fun place. 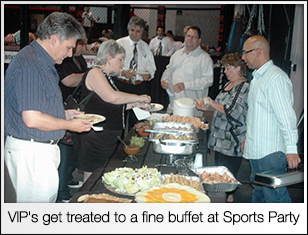 The world’s fastest growing sport is the Ultimate Fighting Championships, and the Mixed Martial Arts (UFC/MMA).  With a 20,000 square foot facility, MMA cages, boxing rings, easy transportation from the Strip, and marketing assistance from RYU, the Sports Party Mansion was born. The Mansion can accommodate groups of 500 plus, whether it’s a cocktail party for ten, to a major extravaganza, the Sports Party provides a fun setting that you will remember long after the party is over. It’s also a setting that provides the theme that makes any birthday, bachelor party, or wedding unforgettable. MMA and boxing superstars are available, by special arrangement, to sign and pose with each guest.  An extensive menu of food and beverage completes the package. For more info please contact: Diana Erland 760- 214-8400 or [email protected]

The Performing Arts Club members at the Anthem Center are always eager to attempt something different, and they’re certainly doing so with their upcoming Fall production. John Rothman has taken an original look at the Vampire myth and written a fun-filled and highly tuneful show called “Vampires, the Musical.” Key roles are being filled by Harriet Wise as Kay Davver, Chuck Simmons as Rigger Morteece, Tony Martucci as Vladmere Jones, Louise Goldman as Virginia Hyman, Hanna Apple as Honeybelle Spectre, George Gingerelli as Dracula, Ron Seifer as Mesemondo and Nydia Segal as Oprah Opra. The resident dance groups are all featured throughout the show. Anthem Jazz is doing “Zombie Zamba,” choreographed by the recently crowned Ms. Senior Nevada 2012, Nicole Duffel. Christine Haynick did “Fang Tango” for the Desert Divas, and Rothman choreographed Showstoppers for the opening “Midnight Story” sequence. The Dapper Tappers perform Tiffany Nagel’s “Oh, what a Wedding,” and the ensemble sparkles in “Orange Blossom Time.” Performances are October 18, 19, 20 at 7:00 p.m. with a matinee on the 21st at 2:00 p.m. for residents of Sun City Anthem.

John Rothman hails from Johannesburg in South Africa, and has been a Las Vegas resident since 2000. In 2005, John composed “Tapestry” for the Las Vegas youth to celebrate the city’s Centennial, and, in South Africa, four of John’s 14 musicals were staged to high 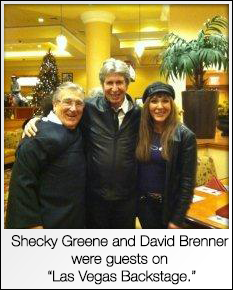 critical acclaim. In Africa, he was composer and script writer for “Pumpkin Patch,” a very successful children’s TV show that had a 10 year run, and he had his own cabaret show at the prestigious Kyalami Ranch Hotel for 13 years. Bill Starr produces, and Johanna DiStefano, directs this colorful and energetic show that showcases the performing talents of many Sun City Anthem seniors. Call Cindy Joseph if you need more information 768-5805.

“Las Vegas Backstage Talk,” the only radio show that “Gets Personal with the Stars,” has signed a one year deal with 1230 AM KLAV, recently bought by Lotus Broadcasting. The Radio and Web show will be moving to 1230 AM KLAV, starting Thursday, Oct. 18. The new time slot will be from 4:00 p.m. to5:00 p.m. PST. Host and producer of “Las Vegas Backstage Talk,” comedian Michele LaFong, interviewed Dennis Miller, and Tom Cotter, runner-up on NBC’s “America’s Got Talent” this year, for its final show on 970 AM KNUU, which aired on Thursday, Oct. 11. All shows are archived on lasvegasbackstagetalk.com. This concludes a very successful 1 ½ year long run for “Las Vegas Backstage Talk.” Tony Orlando will be promoting his upcoming weekend at The South Point Showroom, and will be the first guest on Thursday, Oct. 18. 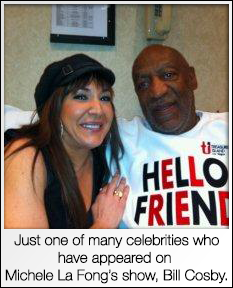 “We’re finally back to where we started… only much better,” says LaFong. “The studio has been upgraded, and since KLAV has been bought by Lotus Broadcasting, I felt very comfortable in signing a twelve month contract with the station.”

Las Vegas Backstage Talk, the show where you can listen-in on “those inside” conversations and backstage stories with the stars that make Las Vegas the Entertainment Capital of the World, is a weekly audio/video production that features interviews with notable show biz personalities from yesterday, today, and tomorrow. Guests have included, Bill Cosby, Debbie Reynolds, Don Rickles, Dana Carvey, Bill Maher, Al Bernstein, and many more. Veteran comedian Michele, is a natural at creating an instant rapport with her guests. She gets the “inside” point of view that one would only get if they were backstage in The Greenroom, overhearing the conversations that typically takes place between artists when they get together