As many of you readers know I raced extensively in Off-Road events beginning in 1969, and Ensenada was one of my favorite racing destination city’s in Baja, California, Mexico. The following is a short story on the history of one historic off-road race, the Baja 500. It started in Baja and ended in Baja most of the time, and still does today.

To everything there is a beginning and the launch of SCORE International’s remarkable history in Mexico came on July 26, 1974, when what has become the World’s Foremost Desert Racing organization took over and officially produced its first SCORE Baja race – the SCORE Baja International in Ensenada.

The Baja 500 was started in 1969 by an organization named NORRA. Because of legal challenges NORRA was removed as the official U.S desert racing promoter in Mexico, by the Mexican government in1972.

With tremendous assistance from Ensenada tourism advocate Nico Saad, world famous man of speed, racing innovator and promoter, Mickey Thompson was invited to take over off-road racing events in Mexico.  Thompson had founded SCORE International in 1973, a sanctioning body to oversee off-road racing across North America and other countries. He and his wife, Trudy, formed the “Mickey Thompson Entertainment Group,” (MTEG) which was promoting indoor motocross and off-road vehicle racing shows.  Along with the world-famous Mint 400 in Las Vegas and its guaranteed purses, the sport of off-road racing was becoming world famous. The sport was no longer a back-country event. It was now in major metropolitan areas, stadiums, and arenas.

In 1973 Thompson approached the Mexican government to allow his fledgling SCORE International organization to be the promoter for off-road racing events in Baja. The Mexican government agreed, and SCORE became the official promoter of the Baja 1000 and the Baja 500, with its first race in 1974. Mickey had hired Sal Fish to run the company for him, and Sal ran the races, while Mickey continued to race his cars and run his tire company. Sal eventually purchased SCORE and continued to run the races until he sold SCORE to Roger and Elise Norman in December of 2012.

A side note here: On March 16, 1988 Mickey and his wife were shot and killed by two hooded killers outside their home in Bradbury, California. The killers were never found, but the man who hired the killing, Thompson’s ex-business partner, Michael Gordon, was convicted in 2007 for the killings.

The first Baja 500 organized and produced by SCORE was held on July 26, 1974, which was the first of over 150 SCORE Baja races. Because of legal issues with original race promoter, SCORE had to call the race the SCORE Baja Internacional for over a decade. l Fish negotiated for the ownership of the name and starting in 1991 it has been called the SCORE Baja 500, even though it was always called the Baja 500 by racers and fans alike. Ensenada is the heart and soul of the SCORE Baja 500 as this year the popular summertime race will start for the 45th time there and finish for the 41st time there. 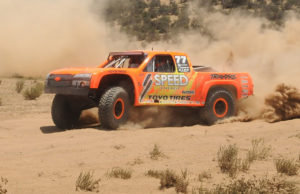 The most starters and finishers in the history of this great race happened in 2007 when 492 vehicles officially started the race with 283 of them official finishers. Racers like Ivan Stewart, Larry Roeseler, Bobby Ferro, Parnelli Jones, Larry Ragland, Robby Gordon, Malcolm Smith, Dr. Bud Feldkamp, Troy Herbst, Bryce Menzies, Steve Hengeveld, Johnny Campbell and the McMillin family racers—Corky, Scott, Mark, and Andy—are all part of the legacy of all-time overall four-wheel and two-wheel vehicle winners of the SCORE Baja 500.

What has become one of the world’s top motor-sporting events will be celebrated in a special way this year at the upcoming internationally-televised 50th BFGoodrich Tires SCORE Baja 500. Round 2 of the four-race 2018 SCORE World Desert Championship will be held May 29-June 3 in Mexico’s Baja California. The race will start and finish in Ensenada, 80 miles south of San Diego.  Most the world’s best desert racers will be in action at this year’s celebration. For more information regarding SCORE, visit the official website of the SCORE World Desert Championship at www.SCOREInternational.com.

British trained actor and comedian, Jim Tavare’s has brought his stand-up comedy, with a double bass, into the Laugh Factory at the Tropicana Las Vegas this week along with fellow comedian, Jackson Perdue, and host Jay Reid.

Tavare has achieved world-wide accolade and has earned the distinction of being HRH Prince Charles favorite comedian. In March 2017 he was involved in a serious car accident that left him with multiple injuries, including a broken neck, a punctured lung and 15 broken ribs. This week is his return to the comedy stage.

Jim co-wrote and starred in ITV’s ‘The Sketch Show’, which won a major award in Britain, and is syndicated worldwide. He also wrote and starred in six highly acclaimed short silent films for BBC2 called ‘Jim Tavaré Pictures Presents’.  This was followed by his own comedy sketch series ‘The Jim Tavaré Show’ co-written with Ricky Gervais, who also starred in the series. Tavare’s major film debut came in 2004 when he played Tom the Innkeeper in ‘Harry Potter and the Prisoner of Azkaban’.  In 2008, he was the first overseas act to reach the finals on NBC’s Last Comic Standing. Jim has since made several US films and television appearances, including roles on Showtime’s ‘Californication’ and NBC’s ‘Chuck’.

The City of Las Vegas will host a Mother’s Day Dance Saturday, May 12, at 7 p.m. at Charleston Heights Arts Center, 800 S. Brush St. The event is open to all ages and tickets are $15 plus tax. Refreshments, wine, and beer will be available for purchase. Dance the night away to Trombonist Walt Boenig and his Big Band playing the iconic sounds and rhythms of music by Glenn Miller, Tommy Dorsey, Duke Ellington, Count Basie, Benny Goodman, and Woody Herman. Boeing started the Las Vegas All Star High School Jazz Band in 1995 and served as its musical director for nine years. He has previously performed at Charleston Heights Arts Center.  For more information, visit www.artslasvegas.org or call 702-229-ARTS (2787.

Join animal lovers and philanthropists for an exquisite evening of small bites, wine, tea, and desserts at the beloved annual event, Animals in Wonderland.  2018 brings wonderment and enchantment behind the gates of Wayne Newton’s Casa de Shenandoah, 3310 E. Sunset Road, 89120, this Thursday, April 26, with a red-carpet beginning at 5:00 p.m. and the event getting underway from 6:00 to 9:00 p.m.

Guests will be greeted by an assortment of colorful characters and animals as they enter the grounds before being treated to a variety of delicious desserts, wines, and an upscale tea bar as they mix with some of Vegas’ finest and meet inspiring (and adoptable) rescued animals.

While enjoying a gourmet candy bar, attendees can bid on a variety of exclusive silent auction items and compete for one-of-a-kind live experiences while having after-hours access to the grounds of Las Vegas icon Wayne Newton.  For guests unable to attend the festivities, they can still have access and bid through the silent auction at https://animals2018.auction-bid.org/microsite/items.  Guests will meet at the visitors center for the red carpet and silent auction before being escorted to the grounds for the event. Cost for the event is $75.00 per person and attire is evening cocktail.

The Plaza Hotel & Casino is planning downtown Las Vegas’ biggest party to celebrate Cinco de Mayo. The Plaza’s Cinco de Mayo party is free to attend and will be under the bright lights of the property’s iconic dome beginning at 7;00 p.m. on Saturday, May 5.

The party will be feature a variety of entertainment, including eight Lucha Libre wrestling matches. A Mariachi band and Folklorico dancers will entertain guests under the dome and bring the festivities inside as they parade through the Plaza’s casino floor. A DJ will also be at the dome party spinning top radio hits with a mix of Latin music.  The Plaza will again have downtown’s largest piñata with prizes, including cash, match play vouchers, free drink coupons and food vouchers. Authentic food and drinks specials will be available all night long, including street tacos from Zaba’s Mexican Grill, Margaritas, Micheladas, Modelo beer and shots of Patron Tequila. For more information, please visit: www.plazahotelcasino.com.