I have to be honest with you readers out there, as I am about to praise a mid-summer television show as one of the funniest I’ve seen in a long, long, very long time. It’s on NBC at 10:00 p.m. PST, Tuesday, and is called “Better Late Than Never.” I have never laughed so damn hard than I have during those 60 minutes. The stars of the show are Henry Winkler (Happy Days), William Shatner (Star Trek and T. J. Hooker), Terry Bradshaw (Pittsburg Steelers) and George Foreman (heavyweight champion). Now, how in the world could you think these guys would be making a comedy out of a tour of Asia? Well, let’s be honest once again: You can’t. Hell no!

The plot, I think, is that these four guys, along with a buddy who does all the heavy lifting, land in Tokyo, Japan and are to partake of all things that are of the strange, seemingly odd-ball customs of Oriental Culture. The first thing is they check into their hotel to find it’s not a hotel like any they have ever seen or stayed in before. Nope, folks, it’s a cube hotel (little cubicles just big enough for a person to stretch out in with a small TV at one end of the cube).  And, of course, their cubes are on the top row. Can you just imagine Foremen climbing and attempting to get his body into the cube? They all appear to have trouble, and the laughter begins.

When it comes to food, now that’s where Bradshaw reigns supreme. The sight of a worm, a pickled mouse, a snake, and other such Asian delicacies makes Terry run like a scared baby: and that is funny as hell to see this big, former quarterback, screaming and making funny faces. I got to tell ya I’m almost rolling on the floor. Oh, there is more when they get to Kyoto. The laughter is continuous as all four are treated to some more odd-ball events. Shatner, who seems to know a lot about Asian culture, keeps telling the guys that he is looking for his “Zen.”  Winkler is the calming guy of the four, and Foremen seems to enjoy watching the other three make fools of themselves—which they are doing all the time. I must say however, William’s playing it basically straight is a devil in disguise: he sets the other three up and they seem to fall for it every time. Henry is a lot like Bill as he plays along and helps set up Bradshaw for some of the gags. It is a “real hoot!” 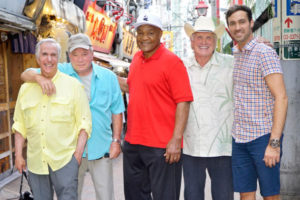 It’s really something to see Bradshaw swimming nude in a never-ending pool at the top of the most famous hotel in Hong Kong, and the comments from the remaining three are precious to hear. The scene where the guys (all five) are getting fitted for a Tailor-made suit by the most expensive tailors in China is hilarious. Especially Bradshaw, again, when they come to measure the in-seam, and how he carries on with the guy doing the measurements.  Foremen gets his full measure of funny during this portion of the show too. This is also where Bradshaw, once again, actually runs away from a special four-course healing dinner being offered to them in a Chinese Pharmacy. I got to tell ya folks, you can’t write this stuff!

Anyhow, if you want to have a good laugh again next Tuesday tune into NBC at 10:00 p.m. and watch “Better Late Than Never.”  I promise you one thing—you will laugh your butt off!

Be an “All-Star” during a free performance from Smash Mouth at the Fremont Street Experience Labor Day Weekend, with its Rock of Vegas concert series concluding on Saturday, September 3rd at 9: 00 p.m. on the 3rd Street Stage. Smash Mouth can be seen touring with their new album Magic – while focusing on entertaining the troops overseas. The band has produced numerous hit songs including “I’m A Believer,” “Walkin’ on the Sun,” “All-Star,” “Then the Morning Comes” and “Can’t Get Enough of You Baby.”

Celebrating its eighth season, the free concerts have become one of the most popular summertime events in Las Vegas. This year’s lineup will turn the legendary downtown Las Vegas entertainment venue into summer’s alternative destination through Labor Day weekend with a free concert series that showcases a stellar lineup of bands that have taken music to the edge.

Formed in late 1994, Smash Mouth began recording demos and showcasing in both San Jose and Hollywood, Calif. In June 1997, Smash Mouth signed to Interscope Records when label brass caught wind of an unknown (and unsigned) band being added to L.A. radio station KROQ’s playlist after only one spin of their song “Walkin’ on the Sun.” Smash Mouth’s major-label debut Fush Yu Mang goes more than double platinum and sets the table for what most consider their masterpiece, the brilliant follow-up album Astrolounge. Boasting three top-ten hits (“All-Star,” “Then the Morning Comes,” and “Can’t Get Enough of You Baby”), sales for Astrolounge are nearly double than their debut album, approaching quadruple platinum status. Smash Mouth’s third eponymous Interscope release features the ecstatic first single “Pacific Coast Party” and the smash hit “I’m a Believer” which was featured on the Shrek soundtrack. The band most recently released the album Magic and continue has focused on touring and entertaining troops in Japan, Guam, Guantanamo Bay, Afghanistan, and Iraq. For complete information on the headliner concerts and nightly entertainment, visit http://www.vegasexperience.com.

The Utah Shakespeare Festival will be celebrating our Armed Forces on September 6, 7, 22, and 23, by offering free tickets to any performances those four days. The Festival appreciates the sacrifices of the men and women who serve and wants to recognize their dedication and commitment to this country. The Festival will be proud to welcome Utah’s 222nd National Guard and any other active or inactive service personnel, as well as their families. Military personal are invited to reserve tickets by contacting the Festival ticket office at 800-PLAYTIX or bard.org.  A valid military ID will be required to pick up the tickets, and there is a limit of four tickets per show per family.  Space is limited for this special offer, so call soon to reserve your seats.  Plays include Henry V, Much Ado about Nothing, and The Three Musketeers in the new outdoor Engelstad Shakespeare Theatre and Julius Caesar and Murder for Two in the Eileen and Allen Anes Studio Theatre.  The Utah Shakespeare Festival is part of the Beverley Taylor Sorenson Center for the Arts at Southern Utah University, which also includes the Southern Utah Museum of Art (SUMA).

“We are excited and proud to make this offer to our military personnel and their families,” Joshua Stavros, media and public relations manager, said. “It is a small way that we can say ‘thank you’ for the sacrifices they have made for us and our country.”

Tickets for the Festival’s 2016 season, which runs until October 22, are still on sale. The “practically perfect” family musical Mary Poppins runs through September 3. Much Ado about Nothing, The Three Musketeers, and Henry V continue in the outdoor Engelstad Theatre through September 10. The Cocoanuts, Julius Caesar, and Murder for Two continue through October 22; and The Odd Couple, featuring artistic directors David Ivers and Brian Vaughn, runs from September 14 to October 22. For specific days and times and to purchase tickets, visit www.bard.org or call 1-800-PLAYTIX.

Legendary singer and entertainer Pat Boone will perform at the Suncoast Showroom on Sept. 9 and 10. Boone has worn many hats throughout his more than 50-year career in the entertainment industry, including singer, actor, TV host, producer, songwriter, author, motivational speaker, radio personality, record company head, TV station owner, sports team owner, political commentator and humanitarian.
An undisputed staple in the 1950’s rock and pop scene, Boone has released numerous chart-topping tracks, including “Moody River,” “Speedy Gonzales,” “Bernadine” and “Love Letters in the Sand.” According to Billboard, Boone was the second-biggest charting artist of the late 1950’s behind Elvis Presley. As an acclaimed author, Boone has penned 15 books. His most notable work, “Twixt Twelve and Twenty,” became a #1 bestseller and has sold more than 1 million copies. Boone turned his focus to gospel music in the 1960’s, and was later inducted into the Gospel Music Hall of Fame in 2003.
Boone founded his own record company, The Gold Label, in the 1990’s. Still serving as the president and CEO of the label, Boone helps manage and promote artists like Glen Campbell, Melody Federer, Sha Na Na and more.  Showtime is 8:30 p.m. Tickets start at $17.50 plus tax and fees and can be purchased at any Boyd Gaming box office location, by calling 702.284.7777 or by visiting www.suncoastcasino.com.