Life takes so many turns and twists, and there are so many strange events happening, that seem to continue throughout ones life and career. Take for example Paige O’Hara and Susan Anton. Both superstar singers are strong entertainers, and have starred in just about everything possible. So, speaking of strange twists of events, what strange turn has taken place between them spanning the years, between mid-1997 through 2011?

Susan Anton was the star of the “Great Radio City Music Hall Spectacular” at the Flamingo Hotel, when the production opened in 1995, and continued as the host of the show, which also headlined the world famous Rockettes, until mid-1997, when she took a well-earned break. Guess who replaced her? Paige O’Hara remained in the show until Ms. Anton returned near the end of 1999.

Now, fast forward to this year and the hit revue, “Menopause The Musical,” at the Luxor. Ms. O’Hara, who has been with the show since it first opened at the Hilton Hotel in February 2005, and when it moved to the Luxor, had been asked by the Disney Studio to do a tour for the re-release of “Beauty and the Beast,” (Paige was the voice of Belle). Naturally, Phil Randall, who is the stage manager for “Menopause The Musical,” and who was also in the same capacity with the “Radio City Spectacular,” (another twist of fate) didn’t hesitate. He had remained good friends with Ms. Anton over the years, and asked her if she would like to step in and take over the role of the “soap star,” and Susan replied, “Yes.”

Paige just returned to Las Vegas earlier this week, having finished the tour, to spend the holidays with her family and friends. She informed me that she’ll be returning to “Menopause The Musical,” on January 9. “The tour was fabulous and my husband, Michael Pointek, and I stayed in Florida for a few days extra to just have some wonderful time to ourselves,” O’Hara said.

The very entertaining show has launched a women’s movement that has superseded entertainment, empowered its audiences and has become a must-see event. The musical was voted “Best Production Show” this year. “Menopause” performs in the Luxor Atrium Showroom at 5:30 p.m. Wednesday through Monday, and 5 p.m. and 8:30 p.m. on Tuesday. Tickets are priced from $49.95 plus tax and fees. Call 702-262-4400 for further information. 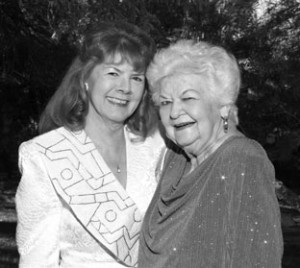 A great lady has taken that long road to the Man Upstairs, and she will be greatly missed by her daughter, Jackie Brett and husband, Mel Carter, and some dear friends here, and a lot of her cronies in Chicago. Catherine “Kay” Brett, who knew how to celebrate her 86 birthdays, passed away on Friday, Dec. 10, with her daughter at her side. It was Mel and Jackie who accompanied her on her trip home to Chicago, where she was born, worked and lived for the majority of her life.

I first met Kay around 1976, when she purchased a home in Las Vegas to be near her only child. But, at the time, Vegas turned out not to be exactly what she was expecting and she returned to Chicago.  Then, a few years later, Kay and her mother, Mattie Gaughan, moved back to Vegas and settled on the west side of our village. When her mother passed on, Kay returned once again to Chicago, to hang out with the girls.  Let me tell you, when you met her gang (which I did numerous times after she moved once again back to Vegas), it was party time. Kay had three great loves, her “Irish Mist,” her Chihuahua, Teco, and her daughter, Jackie.

That reminds me of a story. As many of you know, I’ve raced automobiles for most of my adult life. Beginning back in 1987, I started racing in the High Speed Open Road Races held here in Nevada. I believe it was about 1989 when I asked Jackie if she would like to ride in the race as my navigator. Without any hesitation she was all for it. Well, when Jackie told her Mom that she would be racing in a car going about 150 mph, you would’ve thought the world had just collapsed. But, Jackie, true to her word, became my navigator for about four years. Whenever Kay would hear my name mentioned on the phone, or in person, she would always say, “Oh, him again!” She refused to say my name. I eventually won her over and we became good friends. We often would talk about those days and laugh about the first race, when Jackie had to borrow a racing uniform from former Indy 500 champion, Rodger Ward. That’s a story for another time.

The past 10 years were all downhill for our loveable party girl. Kay’s health was slowly declining, when Jackie and Mel convinced her to move

back to Vegas for the last time in 2000. She settled in a lovely home a few blocks from her daughter. We, our gang of misfits and party goers, would end up more often than not at Kay’s home, where she always had a cold bottle or two of wine waiting for us. She would laugh and could still get ornery as hell when she felt like it. And God forbid the Chicago Bears would lose a football game (she loved professional football on television)! The “Irish Mist” would be flowing that night, that’s for sure.

Well, gang, that’s about it for this week. I hope you have a great Christmas and I, along with about 375 million Americans, am looking forward to a better 2011. I’m outa here!