Friday night (March 15), we attended the 10th Anniversary of Terry Fator as a headliner at The Mirage Hotel & Casino here in my hometown of Las Vegas. The multi-talented performer kicked off the evening in a pre-show ceremony by receiving the Key to the Las Vegas Strip by Clark County Commissioner Tick Segerblom who also proclaimed March 15 as Terry Fator Day. 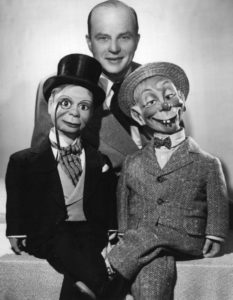 You readers out there may not remember the Edgar Bergen radio show, with his partner Charlie McCarthy, but I do growing up listening to the Chase and Sandborn radio show every week as a kid.  Every star beginning with Mae West to Bob Hope were guests on his show from 1937 until it went off the air in 1948. “Hey, did you see The Charlie McCarthy show the other night?” was a question often asked at that time, even though TV was in its infancy at the time.  You listened to the radio and it was like watching a live show.  It’s hard to explain unless you lived through that time.  There were a few more biggies doing their ventriloquist stuff over the years, but Edgar, Charlie, and Mortimer Snerd were the stars that everyone loved.

I remember when Fator won the crown in America’s Got Talent and opened at the then “The Hotel” formerly the Hilton Hotel over on Paradise Road. We were there opening night, and I told my companion at the time that he was going to be a big star in our little Village.

Well, the show I saw the other night proved my prediction was right on!  I’ve seen a number of his Christmas shows, many of his anniversary shows, and gang, this was the absolute best of them all!  I always enjoyed his partners on stage, and every now and then he brings out a few new ones, this time it was Sammy Davis, Jr., and his friend Dean Martin.  What makes the experience even better is the live band that accompanies Terry: Bill Zappia Keyboard (Musical Director),John Wackerman Drums (Band Leader), Steve Dawson Saxophone, Tom Delibero Trumpet, Dan Trinter Trombone, Jim Buck Guitar, and Donnie Castleman Bass.

A very special guest was his America’s Got Talent season 2 cast-mate Julienne Irwin, who sang a song with Terry near the end of the show. All I can say is if you want to see a master of his profession, then head for the Mirage.  He is that damn good!

Back by popular demand, Christie Brinkley will join the national tour of the Tony Award-winning hit musical CHICAGO as Roxie Hart for a limited seven-show engagement at The Venetian Theatre inside The Venetian® Resort Las Vegas from April 10–14 following a limited engagement at the Orpheum Theatre in Phoenix, Ariz. The show will begin at 7:30 p.m. every night with additional matinee shows at 2:00 p.m. on Saturday, April 13 and Sunday, April 14.

Tickets for the engagement at The Venetian Theatre start at $75, plus applicable fees, and go on sale to the public Friday, March 8 at 10 a.m. PT. Tickets will be available for purchase at venetian.com, in person at The Venetian Resort box offices, or by phone at 702.414.9000 or 866.641.7469. Supermodel and actress Brinkley received critical acclaim in 2010 when she made her Broadway stage debut as merry murderess Roxie Hart in the Tony Award-winning hit musical CHICAGO. She continued her stage success reprising the role in London’s West End for a limited four-week run and again, wowed the sold-out audiences. Back by popular demand, Brinkley reprised the role of Roxie Hart in 2012 with a return engagement on Broadway. She honed her comedy chops in the hit comedy “Celebrity Autobiography,” where superstar memoirs are acted out live on stage. “Celebrity Autobiography” featured first-rate comedic ensemble performing from the actual memoirs of a wide range of celebrities and in a reoccurring role as “Gayle Gergich” on the NBC hit comedy, Parks and Recreation.

Throughout her phenomenal career as one of the country’s most successful and recognizable supermodels, Christie Brinkley excels as an artist, writer, photographer, designer, actress, philanthropist, environmentalist, and political activist. Combining her modeling experience with her artistic talents and diverse interests, Brinkley launched a line of natural skin care products as part of her company, Brinkley Beauty.

Television host, comedian, author, and actor Craig Ferguson is bringing his Craig Ferguson: Hobo Fabulous tour to the Grand Events Center inside Green Valley Ranch Resort on Friday, April 12, 2019 at 8:00 p.m. Tickets are on sale now.
Ferguson entered the world of late-night comedy following a diverse and eclectic career that encompasses film, television, and the stage. In December 2014, Ferguson concluded his ten-year run as the host of CBS’s “The Late Late Show with Craig Ferguson,” which set all-time viewer records, earned him a Primetime Emmy nomination and the 2009 Peabody Award for Excellence in Broadcasting for his interview with Archbishop Desmond Tutu. As the host of “Celebrity Name Game,” Ferguson was awarded the Daytime Emmy for Outstanding Game Show Host two years in a row. This year he was nominated for a third Daytime Emmy Award. As of February 2017, Craig launched his new SiriusXM program “The Craig Ferguson Show” which is broadcast live on Comedy Greats every evening.

In September 2015, Ferguson launched his fourth original stand-up comedy special on EPIX entitled, “Craig Ferguson: Just Being Honest,” which was nominated for a Grammy for Best Comedy Album. The special was filmed at New York City’s Town Hall and focuses on topics spanning from “the deeply meaningless to the profoundly meaningful.” In May 2016, Craig completed The New Deal Tour, a 60-show comedy stand-up tour across North America. Ferguson was last seen in his original History Channel show, “Join or Die,” which featured him and his celebrity friends debating provocative topics with history experts.

Las Vegas Days (formerly known as Helldorado Days), an annual cowboy-themed event celebrating Las Vegas’ tribute to the Wild West, will offer two nights of rodeo at the all-new Core Arena Friday-Saturday, May 10-11, as well as the annual Helldorado Parade May 11. The Commission for the Las Vegas Centennial and the Plaza Hotel & Casino are sponsoring the rodeo, and admission will be free.   Celebrating its 85th year, the Las Vegas Days Rodeo is sanctioned by the Professional Rodeo Cowboys Association, and will take place from 5:00 to 7:00 p.m. on Friday-Saturday, May 10-11. The rodeo will feature bull riding, barrel racing, team roping, tie-down roping, steer wrestling, saddle bronc riding and bareback riding, with prize purses totaling $40,000 and custom belt buckles for the champions. More details will be available at https://www.plazahotelcasino.com/entertainment/core-arena/.

All community members are invited to submit entries in the Helldorado Parade at no charge – schools, local businesses, car clubs, equestrian groups, civic groups, nonprofits and more. The 2019 Helldorado Parade is scheduled for 10:00 a.m. Saturday, May 11, downtown on Fourth Street from Gass to Stewart avenues. An independent panel of judges will decide on the award winners for the best entry, most creative, best theme, best float, best equestrian entry, best car club or motorized vehicle, and best walking group.  The theme of entries should reflect our western heritage; the birthday of the city of Las Vegas; Vegas, then and now; and/or the traditions of Helldorado Days. Submit your application to participate online no later than April 19, 2019. You can also apply and view full application packet information at www.lasvegasnevada.gov/Helldorado.  There is NO fee to enter the parade; high school marching bands will receive $1,000 for participating! High school groups that build and enter a float themed on western heritage or the birthday of Las Vegas will get $1,500, just for participating. Schools will be limited to two entries each. Helldorado was created in 1934 by the Benevolent and Protective Order of the Elks Lodge No. 1468. Today, the parade is sponsored by the Commission for the Las Vegas Centennial. For more information on the Helldorado Parade, call 702-229-6672.

Wagner is a seasoned Broadway veteran and starred as the Beast in Disney’s smash hit musical, “Beauty and the Beast.” He originated the role of Rapunzel’s prince and toured the U.S. as both Cinderella’s prince and the wolf in Stephen Sondheim’s “Into the Woods.” Wagner appeared as Javert in “Les Misérables” Van Helsing in “Dracula the Musical,” and Athos in “The Three Musketeers.”

“Into the Woods” premieres May 22 and runs through June 8 at the Super Summer Theatre. The Tony-Award winning classic combines the stories of Cinderella, Little Red Riding Hood and Jack in the Beanstalk. A witch sends a childless baker and his wife on a quest into the woods to unravel a curse as they cross paths with some of Grimm’s Fairytales most famous creatures. Whether it’s Cinderella running from her Prince, Jack climbing the beanstalk, or Rapunzel letting down her hair, everyone is wishing to live happily ever after. With an ingenious score and timeless storytelling, “Into the Woods,” will enchant Super Summer Theatre audiences and show what really happens after “happily ever after.”