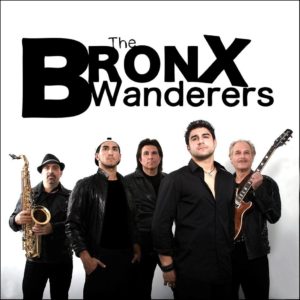 Audiences will be charmed with the best 90 minutes of America’s Rock ‘N’ Roll songbook all on one stage when The Bronx Wanderers perform at Bally’s Las Vegas beginning Thursday, Sept. 22. Up close and personal, yet larger than life, the father-and-son trio, flanked by their top-notch band, will effortlessly perform hits made famous by the likes of Frankie Valli & The Four Seasons, Dion, the Beach Boys, Queen, Bruno Mars and many others spanning from the beginning of Rock ‘N’ Roll right through today’s tunes, seven nights a week at 5:30 p.m.

United by their passion for great music, The Bronx Wanderers are helmed to perfection by charismatic master entertainer Vinny, who is a former chart-topping record producer. He is joined on stage by his two sons – Vinny “The Kid,” an Italian Brian Wilson who sings, arranges and plays several different instruments, and drummer extraordinaire Nicky “Stix” – as well as a killer hand-picked backup band.

“We have always enjoyed playing shows in Las Vegas, so you can imagine our excitement over getting to perform here seven nights a week. After completing a national tour over the last year, we are thrilled to find a home at an ideal Center-Strip location like Bally’s,” said Vinny. “This isn’t just your parents’ Rock ‘N’ Roll. Audiences will leave the show singing and feeling like one of the famiglia!”

“This is a one-of-a-kind show! The Bronx Wanderers provide the best musical time you will experience on one stage, or dare I say, ever!” added Kathi Glist, one of the show’s producers. “When 20 year olds in the crowd are jumping to their feet, clapping and yelling to hits from the ‘50s to present day, right alongside 70 year olds, you know this is one rockin’ show you’ll never forget.”

With superlative vocals and musicianship, dynamic enthusiasm and a genuine love of the music they perform, The Bronx Wanderers recreate the magic of the era and build an energetic bond with their audience. The show tells the stories and plays the music that will take you as close as you can get to having lived the actual experience. The Bronx Wanderers take the stage each night with new material, but they never leave out the favorites that their fans and audiences have come to love.  The Bronx Wanderers have toured the country over the past 12 years, playing pop/rock classics spanning six decades in front of sold-out audiences everywhere. The show covers all musical bases, and hits an out-of-the-park home run with audiences of all ages every night. This is more than just an amazingly talented family band. The Bronx Wanderers are a heart, a sound, a feeling and a harmony that goes right to the heart of the crowd, getting them singing along and up on their feet like no other show can do.

Tickets are $49.99, $59.99 and $74.99 for VIP seating which includes a meet and greet with the cast. Locals can purchase premium seats for $34.50 when they mention the code BWLOCAL. Tickets are on sale now and may be purchased online at www.ballyslasvegas.com. 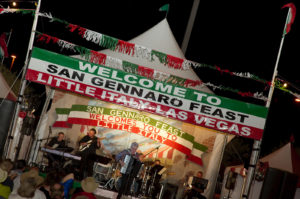 The Annual San Gennaro Feast will once again take place Sept. 14-18, 2016, inside Craig Ranch Regional Park on the grass. The Las Vegas food and music festival celebrates the spirit of San Gennaro and features more than 70 restaurant food booths, 60 Davis Amusement Cascadia rides, petting zoo, pony rides and piglets, midway games, arts and crafts booths, and continuous live music. Helicopter rides over the Las Vegas Valley will also be available. entertainment coordinator and singer Tony Sacca will host and feature some of Las Vegas’ finest entertainers and bands and also headline nightly. Tickets are priced at $10 for adults and children (children 54 inches and under are free) There is ample free parking with valet service.

As usual the San Gennaro Feast will continue its tradition of Blessing of the Feast on Thursday, Sept. 15 at 7:00 p.m. on the main stage with Father Dave Cassaleggio giving the blessing, North Las Vegas Mayor John J. Lee and other dignitaries and VIPs in attendance. Further traditions include plenty of food, including a vast variety of traditional Italian fare including pasta, pasta and more pasta, fried calamari, calzones, baked clams, pizza, stuffed artichokes, Italian fried dough, Italian sausage, peppers and onions, etc., as well as American food including corn on the cob, funnel cakes and more and international cuisine. There will be five beer-wine locations and margaritas.

More than 60 amusement rides and midway games including a petting zoo and pony rides are available. Pay One Price to ride all rides endlessly $25.00 Wednesday and Thursday / $30 Friday, Saturday and Sunday.

And, just a reminder don’t forget the great show planned for the Cabaret Jazz room at the Smith Center this Saturday. You will hear such notable songs as “Walking in Memphis,” you’ll take a drive down “Route 66,” or get in a “New York State of Mind”? George Bugatti presents “Portraits of America,” a multi-media show guiding audiences through a musical retrospective of songs about the greatest cities in America.  Kicking of his 24-city tour, this Saturday evening, and celebrating songs of America at 7:00 p.m.  Tickets range from $39 – $45 and are currently on sale at The Smith Center box office, online at www.TheSmithCenter.com or by phone at 702-749-2000.  The 90-minute show will feature a trio of Bob Sachs on bass, Paul Stubblefield on drums, and a talented line-up of guest vocalists.  The Las Vegas show of “Portraits of America” features special guests such as “The Marty Allen Show” co-star, Karon Kate Blackwell; Sam Arlen, son of “Wizard of Oz” Composer Harold Arlen; and Nelsen Sardelli, long-time Vegas entertainer and film star.  Based on an idea by Bugatti’s longtime agent, Eric Amada, “Portraits” is the second show developed by Bugatti in his hometown of Las Vegas to tour the country and have a national stage presence. Musical arrangements are by Steve Rawlins and Gary Anderson. I’ll see you there!

Could there be exciting information left undiscovered in the United States Government’s old nuclear testing footage?  Find out during the next installment of the National Atomic Testing Museum’s 2016 Distinguished Lecture Series! On Friday, September 30th, starting at 6.00 p.m. with an informal meet and greet, the Museum will be hosting a special presentation from Dr. Gregory Spriggs, a nuclear weapons physicist in the Design Physics Division at Lawrence Livermore National Laboratory.  During his 6.30pm talk, Dr. Spriggs, who is also in charge of LLNL’s fascinating film Scanning and re-analysis project, will explain how re-analyzing decades of old film with modern technology may reveal new scientific data!

Complementary light refreshments and snacks will be served to guests. Please RSVP by calling (702 794-5151.  Ask about upcoming events and the benefits of Museum Membership! The National Atomic Testing Museum is located at 755 East Flamingo Road Las Vegas, NV 89119-7363

Jonathan Karrant’s latest album, “On and On” has landed in the #4 spot in jazz charts. He has received honors thoughout the states including; the 2014 New York City Jazz Cabaret Honors and, in 2015, he was voted “Best Singer” for the Bravo California Awards. Also, in 2015 Jonathan was named one of the top 12 rising jazz vocalists in New York. He has studied the art of performance under the direction of Marilyn Maye and Kurt Elling. “A voice, romantic without being cloying, warm but not forced, Karrant carries these songs with an emotional weight that make it seem at times as if he had written them himself. Just listen to his jazzy makeover of the Beatles’ eternally beautiful “In My Life” and hear the yearning in his singing,” The Jazz Corner. “Jonathan Karrant works straight out of the American songbook with a level of manly confidence and jazz suave and bonhomie that was patented by Mel Torme himself.” –The Reader magazine.