Mary Wilson, one of the original founders of the highly honored musical group, The Supremes, and Martha Reeves and the Vandellas, both legendary performers of music known then (‘60s) and today as the Motown sound, will come together on the stage at The Orleans Hotel & Casino for a very special one night, titled “The Legendary Ladies of Motown,” this Saturday evening (April 27) with a single show at 8:00 p.m.

It’s been more than 55 years since Martha Reeves first boarded that rented bus along with the likes of The Miracles, Stevie Wonder, the Supremes, and Marvin Gaye on the first Motown Review. She and her backup group, the Vandellas, sang behind Marvin and soon hit the charts with their own trifecta:  “Come and Get These Memories,” “Love is Like a Heat Wave,” and “Quicksand.”  Over the next decades, Martha Reeves and the Vandellas would be a constant presence on the music charts, as well as on television and top venues across the US and abroad.

Reeves is the recipient of the Dinah Washington Award, a Rhythm n’ Blues Foundation Pioneer Award, a Black Woman in Publishing Legends Award, and has been inducted in a number of Hall of Fames including the Alabama, Soul, Rock and Roll, and Vocal Group halls of fame to name just a few. “Dancing in the Street” has been entered into the Library of Congress Registry of Historical Recordings and the Grammy Hall of Fame. Martha Reeves and the Vandellas are listed among Rolling Stone magazine’s “100 Immortal Artists” and Martha herself was named one of the “30 Top Lead Singers of all Time.”

It was a vision of musical stardom as a Detroit teen that inspired Mary Wilson, along with Diana Ross and Florence Ballard, to found one of the most successful female singing groups in recording history – The Supremes. Since then, Wilson has written a best-selling autobiography, performed on stage and screen, lectured and toured the world, and continues to be looked up to as a singer who set the standard for females in the recording industry.

As an original Supreme, Wilson was a much sought-after interview regarding the award-winning film, “Dreamgirls.”  After covering the red carpet premiere for “Extra,” she endeared herself to a whole new generation of Hollywood stars and fans alike, including Golden Globe winners Eddie Murphy and Jennifer Hudson, as well as Jamie Foxx, BEYONCE, and Snoop Dogg!  The success of the film also rekindled interest in Wilson’s best-selling autobiography, DreamGirl:  My Life as a Supreme.

Martha and the Vandellas (known from 1967 to 1972 as Martha Reeves and the Vandellas) were an American all-female vocal group formed in 1957. The group achieved fame in the 1960s with Motown. Selected members of the group were inducted into the Rock and Roll Hall of Fame in 1995. Formed in 1957 by friends Annette Beard, Rosalind Ashford and Gloria Williams, the group eventually included Martha , who moved up in ranks as lead vocalist of the group after Williams’ departure in 1962. The group signed with and eventually recorded all of their singles for Motown’s Berry Gordy’s imprint. Martha went on to perform as a single and with the Vandellas. After retiring from the stage in 2005, Reeves was elected to the eighth seat of Detroit’s city council. After losing her seat in 2009 she returned to performing as Martha Reeves and the Vandellas.

Before reaching her teenage years, Wilson and her family had settled at Detroit’s upstart housing project, the Brewster-Douglass Housing Projects. Mary Wilson first met Florence Ballard at an elementary school in Detroit. The duo became friends while singing in the school’s talent show. In 1959, Ballard asked Wilson to audition for Milton Jenkins, who was forming a sister group to his male vocal trio, the Primes. Wilson was soon accepted in the group known as The Primettes, with Diana Ross and Betty McGlown.

The Primettes signed to Motown Records in 1961, changing the group’s name to The Supremes. In between that period, McGlown left to get married and was replaced by Barbara Martin. In 1962, the group was reduced to a trio after Martin’s departure. The Supremes scored their first hit in 1963 with the song, “When the Lovelight Starts Shining Through His Eyes“, and reached No. 1 on the pop charts for the first time with the hit, “Where Did Our Love Go“, becoming their first of 12 No. 1 singles. By 1964, the group had become international superstars. In 1967, Motown president Berry Gordy changed the name of the group to Diana Ross & The Supremes, and, after a period of tension, Florence Ballard was removed from the Supremes that July. Cindy Birdsong became a Supreme.

Mary continued to perform with her own group eventually going on to a solo career. Wilson is the creator of the Mary Wilson/Supremes Gown Collection and has had the collection on tour in a series of exhibitions. It has been exhibited at the Rock & Roll Hall of Fame in Cleveland, Ohio and has had a number of UK tours, starting at the Victoria and Albert Museum in London.

Ms. Wilson’s global stature grew immensely after former U.S. Secretary of State Colin Powell named her one of nine cultural ambassadors in 2003. As an official “goodwill” ambassador, Mary visited poverty-stricken areas in Bangladesh, where she witnessed children as young as five years old having to break bricks to earn money for their families. In Pakistan, she spoke at Fatima Jinnah Woman University about pursuing their goals and “Daring to Dream.” In Mozambique and Botswana, she addressed young people about the dangers of HIV and AIDS and her quest for world peace.

Together Mary Wilson and Martha Reeves and the Vandellas will belt out over 20 major hits in one amazing 90 minutes of Motown Music. Tickets from $39.95 plus taxes and convenience fees can be purchased at the box office or contact 800-745-3000.

The Neon Museum celebrates the passage of Nevada Assembly Bill 182, which officially makes neon the state element of Nevada. In recognition of this event, the museum will offer 10 percent off all merchandise in its gift store from April 29 to May 6.

Since its creation in 1996 and the official opening of the museum in 2012, the non-profit Neon Museum has remained dedicated to collecting, preserving, studying, and exhibiting iconic Las Vegas signs for educational, historic, arts, and cultural enrichment. Today, it welcomes more than 200,000 annual visitors from around the world who are drawn by the allure of the state’s most famous art form. 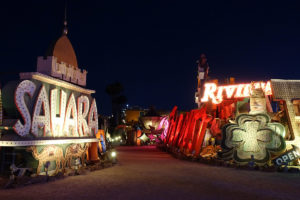 “Make no mistake—this is the Silver State and it always will be. But I think there is a significant case to be made that Neon has been a more powerful business additive to the Nevada economy than silver and gold combined,” said Rob McCoy, president and chief executive officer, Neon Museum. “Of course, here in Southern Nevada, neon put the ‘fabulous’ in ‘Welcome to Fabulous Las Vegas. But it was the neon light form—the element—that captured the world’s imagination.”

On its 2.27-acre campus, the Neon Museum houses an outdoor exhibition space known as the Neon Boneyard (“boneyard” is traditionally the name for an area where items no longer in use are stored); the North Gallery, home to the nighttime augmented-reality, audiovisual spectacle, “Brilliant!”; the Boulevard Gallery outdoor exhibit and event space; and its visitors’ center, housed inside the former La Concha Motel lobby. The museum collection also includes nine restored signs installed as public art throughout downtown Las Vegas.

The Bacon Brothers, featuring award-winning actor Kevin Bacon and his Emmy-winning brother Michael Bacon, are bringing The Shaky Ground Tour to Rocks Lounge inside Red Rock Resort on Saturday, Aug. 3, 2019 at 8 p.m. Tickets start at $39 and are on sale now.

Most people would agree that there’s nothing stronger, more durable and occasionally, even more volatile, than the bond between brothers. And when that bond includes the common goal of making music, the results often offer reason for an audience to sit up and take notice. There have been any number of examples in music’s modern era — the Everly Brothers, the Beach Boys, the Kinks, and Oasis to name but a few. Not that it’s easy or even agreeable, but there is common cause, and that’s generally enough to ensure there’s passion and purpose in its creation.

Just ask The Bacon Brothers. Fiercely devoted to making music, even from an early age–they cite such influences as the Rolling Stones, the Beatles, Motown, Led Zeppelin, Philly soul, and James Taylor, with mentions from Michael of Pete Seeger, Jimmy Rogers, Chet Atkins, and the Jim Kweskin Jug Band, and additional kudos to Michael from Kevin for his input), the two siblings share a singular body of work that’s found them spending more than 20 years of working the road and paying their dues, resulting in nine albums – Forosoco (1997), Getting There (1999), Can’t Complain (2001), Live: The No Food Jokes Tour (2003), White Knuckles (2005), New Year’s Day (2009), Philadelphia Road (2011) 36 Cents (2014), and the eponymous, The Bacon Brothers (2018) — spanning rock, soul, folk and Americana. Never content to be typecast, they’re fiercely devoted to the cause of making music, undeterred by fame, fortune or the pitfalls that frequently obstruct the path to success. 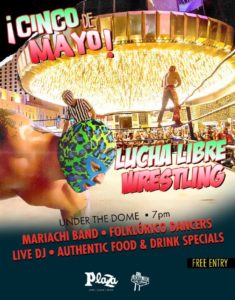 The Plaza Hotel & Casino is planning downtown Las Vegas’ biggest party to celebrate Cinco de Mayo. The Plaza’s Cinco de Mayo party is free to attend and will be under the bright lights of the property’s iconic dome beginning at 7:00 p.m. on Saturday, May 4.

The outdoor party will feature a variety of entertainment, including Lucha Libre Wrestling, a Mariachi band and Folklorico dancers. A DJ will also be at the dome party spinning top radio hits with a mix of Latin music.  The Plaza will again have downtown’s largest piñata as well as authentic food and drinks specials will be available all night long, including street tacos from Zaba’s Mexican Grill, Margaritas, Micheladas, Modelo beer and shots of Patron Tequila. For more information, please visit https://www.plazahotelcasino.com/entertainment/cinco-de-mayo/.