How many of you out there remember the name Sam Kinison? I’m sure you heard the name back in the ‘70s and ‘80s. Well, not only was Kinison a name to be recognized on comedy stage throughout the world, but right here in Las Vegas he was a major comedy star. And, those who travelled with Sam, were also top billing. Today the Original Outlaws of Comedy are once again touring the major comedy clubs of the world, commemorating the death of their buddy 25 years ago. The three Outlaws will be at the Laugh Factory, inside the New Tropicana Las Vegas, Monday, July 10 through Sunday, July 16, with two shows nightly at 8:30 and 10:30 p.m. Tickets range from $34.95 to $54.95. Call 2411.

If the mark of a great entertainer is the ability to continually reinvent, create and astonish an audience, then Carl LaBove has undoubtedly made his mark. An original founding member of “The Outlaws of Comedy“, His powerful approach to stand-up comedy has been filling theaters and clubs for over 30 years. LaBove, and the other original members of the Outlaws of Comedy, Allan Stephan, and Mitchell Walters, will be together on the Laugh Factory stage.

LaBove was born in Fort Worth, Texas and grew up a military child, which required his family to move all around the world during his youth. At age nineteen he discovered stand-up comedy with the man who would become his best friend, Sam Kinison. Together the two founded a Rock & Roll Comedy concept that would earn Billboard magazine’s “Top Tour” honors by selling out theaters across the country for five straight years. Carl became the special guest on all tours and collaborated on three albums and several specials. They formed the Outlaws of Comedy a brand of comedic outlaws both on and off the stage. The two lived every comics dream performing at rock club’s amphitheaters and sold out arenas for the next eight years.

The friendship and collaboration tragically ended in April,1992 when Sam and Carl were in route to a gig in Laughlin Nevada. Sam was injured in a car accent and died shortly, as he had lived, with his best friend Carl LaBove at his side.

Skyrocketing to the biggest performance stages in the country as a founding member of “The Outlaws” in the late 80’s, and early 90’s, Carl would establish himself as an unparalleled comedic force during the biggest comedy boom of the last fifty years. Twenty years after “The Outlaws,” Carl continues to sellout venues and amaze audiences from coast to coast. With credits that include The Tonight Show, HBO, Showtime, two comedy CD’s, a concert DVD for Journey Records and much more.

Allan Stephan has made a name for himself on the stand-up scene with a brand of conversational humor coupled with finely honed improvisational skills. A longtime veteran of the comedy club circuit, Stephan has a much-deserved reputation as one of the quickest and funniest off-the-cuff comics working today. He has headlined every major club in the country, and for six years played to sold-out casinos and arenas with the notorious Outlaws of Comedy starring comedian Sam Kinison. He’s also opened for many famous acts including Harry Belafonte, Tony Bennett, and Smokey Robinson, just to name a few. Stephan turned to writing in the mid-90s and soon became the executive producer on the hit television show Roseanne and served as co-executive producer on HBO’s Arli$$.

Hot off the wire: Following months of testimony, a court appointed arbitrator recently ruled in favor of the Westgate Las Vegas Resort & Casino, in a dispute over the closing of the Graceland West Exhibit and Graceland Chapel in 2016. Per the ruling, “the total amount owed to Westgate (Claimant) by Company (Respondent) considering principles of both law and equity to be $2,247,208.33.”

“While we are very satisfied with the final ruling against the entity owned by Joel Weinshanker that leased the exhibition space from our resort, we are also saddened by the fact that the legacy of Elvis Presley was tarnished by the leasee’s untimely and unnecessary closing of this exhibit,” said Mark Waltrip, Chief Operating Officer of Westgate Resorts. “Westgate Las Vegas Resort and Casino was the Las Vegas home to Elvis Presley for many years, and we will continue to explore other opportunities to honor this musical legend.”

Chris Clyne, the son of Las Vegas Motor Speedway founder Richie Clyne, ended a nearly four-year winless drought by winning the 76-lap “Spirit of ’76” in front of a sold-out Night of Fire crowd at The Bullring on Monday night. It was Clyne’s first victory since Oct. 6, 2012, and his 11th career win at the short track.

“It’s been four years since I won a race, and this is pretty special,” said Clyne, who finished .808 of a second ahead of Denzel West for the win. “We were way off all day long, and I was texting different friends and telling them we’d be lucky to have a fifth-place car tonight. Everything went our way, and I’ve got to thank everybody involved.”  The special night also included the track’s first-ever Figure 8 Trailer Race, which was won by Wade Pearson, who earned $1,250. Bryce Wolfe also won a bonus for best-decorated trailer, while Dallas Simonette picked up the “Master of Disaster” check for causing the most damage. The one-of-a-kind evening was capped by one of the city’s best fireworks shows, a fitting exclamation point on a great night. The two-time track champion was thrilled to finally earn his first Night of Fire triumph.

“I’ve won 20-something races here, and I’d never won on the Night of Fire, so it finally happened and I’m pretty stoked,” McMorran said. “I was in Tucson two nights ago, so we’ve driven about 1,000 miles the last two days. I’d like to thank everybody at Vegas Made Racing, because we’ve put three cars together in about a week-and-a-half to make this weekend happen.” Matt Larsen became the first two-time winner in the NASCAR Super Stocks class this season after holding off a charging Court Connell by just .135 of a second. 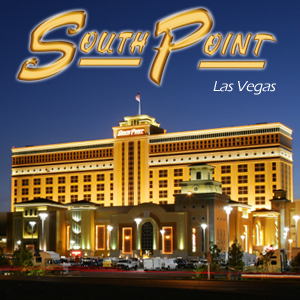 John Cannizzaro joins South Point Hotel as the director of catering and will actively oversee all catering operations that relate to any events on property including breakfast, lunch and dinner receptions, exhibit shows, conventions and more. Cannizzaro brings more than a decade of expertise in dining and catering management to his career at South Point Hotel. Most of those years were spent in senior level positions at many of Las Vegas’ most popular hotel and casino properties, serving as the senior catering and conference services manager at Tropicana Las Vegas, catering manager at ARIA Resort and Casino and catering sales manager at Las Vegas Hilton. As director of catering, Cannizzaro’s position requires him to lead catering personnel, manage budgets, act as the lead organizer of large events, control the audio-visual operations during meetings and conventions and assist in the booking of a variety of events including bi-annual groups, social functions, meetings and more.

“After considering Cannizzaro’s experience, ability to manage large scale events and attitude when dealing with colleagues and guests we realized how valuable he will be in bringing special events on property,” says South Point Hotel, Casino and Spa General Manager, Ryan Growney. “We have no doubt all of South Point’s guests who travel from around the world to attend conferences and shows will be in good hands with John at the helm of our outstanding catering department.”

Before his career brought him to Las Vegas, Cannizzaro earned his Bachelor of Arts in Food Service Management from Johnson & Wales University and served in the United States Air Force, from which he was awarded the Distinguished Air Force Achievement Medal.

Shake Shack® is thrilled to announce it will be setting up a Shack in Henderson on Wednesday, July 12th at 11AM at The District at Green Valley Ranch, the finely curated shopping, dining, and entertainment destination. The Henderson Shack will be located at 2225 Village Walk Drive. Shake Shack is a critically acclaimed, modern day “roadside” burger stand known for its 100% all-natural, antibiotic-free Angus beef burgers, chicken (no hormones added ever), griddled flat-top dogs, fresh-made frozen custard, crispy crinkle cut fries, beer, wine and more. A fun and lively community gathering place with widespread appeal, Shake Shack has earned a cult-like following around the world.  In addition to the Shack classics, the Henderson Shack will be spinning up a selection of local frozen custard concretes: PB Toffee Crunch (vanilla custard, peanut butter sauce, marshmallow sauce, chocolate toffee and malt powder), Takes the CupCAKE (chocolate and vanilla custard, The Cupcakery cream cheese-chocolate crunch frosted cupcake and fudge sauce) and Pie Oh My (vanilla custard and a slice of Four & Twenty Blackbirds seasonal pie).