Drove out to the Copa Room the other afternoon (part of the famous Bootlegger Bistro complexes out on South Las Vegas Blvd), to mingle with a bunch of old friends, and some new ones too, and to listen to three fabulous men explain what, how, and why they produced a new studio record album. The three individuals, all superstars on their own, were recording, radio, and television personality Dennis Bono; legendary jazz guitarist Joe Lano, and award-winning recording producer Dan Slider. The project being released on September 3, 2017 is “To Laugh, To Love, To Life,” and will be available on Amazon, iTunes, and CD Baby.

We listened to three of the 13 songs selected to be on the album, which was recorded in the new Mancuso Music Works Studio, where Ronnie Mancuso holds forth 24/7. And, what came out of that studio and was presented to a few hundred friends that afternoon, was a neat, smooth, and musically great listening album.

The first song was a great jazz standard, first recorded by the wonderful Shirley Horn in 1992, “Here’s to Life,” and thus begins the story in music of a journey taken by a young man who was born to sing, Dennis Bono.  First discovered by Jilly Rizzo, who had listened to his first album, “By Myself” (produced and arranged by his friend Dan Slider). Rizzo liked it so much he took it to his friend, Frank Sinatra, who liked what he heard. With help of Frank and Jilly, the wheels began turning, and before Dennis knew it he was opening for Don Rickles.

The rest is, as they say, history. Now known as an artistic interpreter of the poetry of music in his lyrical phrasing of songs from the Great American Song Book, Bono has proven Sinatra was right when he was quoted as saying, “This is the kid that’s going to carry the torch for our music.”  And, in this album, arranged by Lano, you begin to understand the journey as each song tells its own story, especially the final selection, “This Is All I Ask.”

“Joe’s remarkable versatility as a guitarist shines through in his creative and clever music arrangements for this album,” Bono said. “And to have my friend, Dan, join me in this endeavor was especially important because he was there when I did my very first one. It has been a remarkable journey….”

So, if you want to listen to some great songs like “I’m Glad There is You,” “Goody, Goody,” “They Can’t Take That Away From Me,” and “I Thought About You,” plus others, then order it today. You will not be disappointed, I guarantee it! 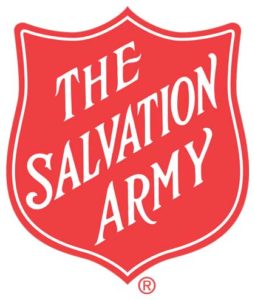 Lt. Col. Kelly Pontsler, Divisional Commander of The Salvation Army’s Southwest Division, states that The Salvation Army’s Southern Territory is extremely well-equipped and experienced with such disasters, so to date, no EDS teams from the Southwest Division (part of the Western Territory) have been deployed… but are on standby should the call come.

The devastation from the storm has spurred communities across the country to rally in support of those affected, and The Salvation Army is encouraging those that would like to help to make monetary donations to the cause, rather than in-kind donations such as water and other supplies.

“We are extremely grateful for the outpouring of support, and the best way to help during any disaster is to make a monetary donation,” says Lt. Col. Pontsler. “Monetary donations allow disaster responders to immediately meet the needs of the people affected without incurring many of the costs associated with sorting, packing, transporting, and distributing donated goods.”

Following are several means to make a monetary donation to The Salvation Army, 100 percent of which will go to assist those affected by Hurricane Harvey: Online: helpsalvationarmy.org., Donate by phone: 1-800-SAL-ARMY, Mail checks to: The Salvation Army, PO BOX 1959, Atlanta, GA 30301. Please designate ‘Hurricane Harvey’ on all checks. To receive a donation link via text: Text STORM to 51555

At noon on September 23, 2017, at the Westgate Las Vegas Resort, Las Vegas resident Helene Neville will have the world at her feet as she completes the last 500-mile leg of a seven-year, 12.855-mile solo run across every state in the continental United States, becoming the first woman, and second person, on the planet to ever achieve such an accomplishment.

While Neville will be physically arriving on foot, she also will be driving home her message – “Rethink the Impossible.” Currently on the last leg of her run, across Colorado, Utah, and Nevada, for the 57-year-old transcontinental runner, nurse, author, Flag for Hope star, inspirational speaker, mother, grandmother, and on-going cancer survivor/warrior, the story of her run is much more than an athletic achievement. Rather, it is a true testament to the human spirit and what it can endure and of her discovery of the extents of human strength and beauty, both in herself and in the people across the amazing country we live in.

“I had a much deeper purpose than an athletic one,” Neville acknowledges, revealing that she began the run to try and get over her grief of losing her mother and to find herself. “If you put action behind a thought or a dream, you can do with it whatever you want. I used to believe the adage, ‘Where there’s life, there’s hope’ but with hope, you go nowhere. With action, you can go anywhere. You must push the limits. We don’t know the limits of human potential or performance.

“I did this entire seven-year run with no plan and no money,” she continues, “I began and ended each day in unfamiliar surroundings, asking and receiving help from strangers. I choose to look for kindness in others rather than stay on guard expecting the worst. And I went into some areas considered so bad that the police won’t even go there. Yet, I found nothing but kindness and compassion from people from all levels of society, even those in the worst circumstances.  I discovered that there is more right in this country than wrong in terms of the human experience. We just have to open our eyes and reach out to each other because it’s there. We need to celebrate each other’s strengths rather than weaknesses. I relied on community and found mankind. The most spiritual thing we can do is embrace humanity and connect with those around us.” 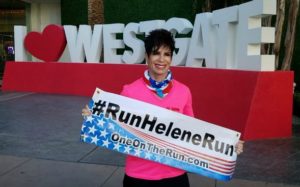 Without a backup crew or roadside support, all alone on the highways of America, surviving on whatever was in her backpack on any given day, Neville made her way around the continental United States in five segments: from California to Florida, Canada to Mexico, Florida to Maine, and Canada (Eastern Maine) to Washington State, and finally started running this last segment though Middle America (Wyoming to West Virginia and back) on May 1, 2017. Through the entire five segments, people she had never met literally took her into their homes each night of her run, fed her, moved her support vehicle 20 to 50 miles ahead of each start point for the next day’s run, and placed water every three to four miles along her daily running route.

Still, the obstacles Neville faced were immense. She was sidelined by cancer, only to run 25 miles a day, sometimes more. During her run from Canada to Mexico, she carried a 22-pound urn filled with the ashes of her brother who had passed away just before the start of that run. Despite summer heat in the Deep South, record humidity in the Midwest, wildfires in the West, treacherous terrain, blizzards in the mountains, altitude sickness, constant logistical and financial issues, a broken heel bone, a broken rib, hurricanes, a reoccurring cancer diagnosis, pneumonia, and an attempted assault and abduction, she kept running. And, somehow, after running miles each day, she would harness the strength to visit hospitals, schools, fire departments, police stations, cancer centers, and communities to share her story.

“I run to inspire others to realize their dreams,” she sums up. “I run to promote health, hope, and unity in America and to encourage all people to ‘Rethink Impossible.’”

It’s official, on Tuesday, Aug. 29, at 12:01 a.m., Las Vegas Soccer LLC announced Las Vegas Lights Football Club (FC) will be the official name for the expansion United Soccer League (USL) professional team, which will begin play at Cashman Field in downtown Las Vegas during the 2018 season. After weeks of anticipation, and more than 10,000 votes being cast by fans, Las Vegas Lights FC was revealed in neon lights at the Fremont Street Experience in Downtown Las Vegas.

Las Vegas Lights Football Club (FC) is a professional soccer team in Las Vegas. Las Vegas Lights FC is the 33rd team to join the United Soccer League (USL) which is the premier second division professional soccer league in the U.S. & Canada and the only league officially affiliated with Major League Soccer. The team will begin its inaugural season in March 2018, with all matches held at Cashman Field, located in Downtown Las Vegas.  For more information visit LasVegasLightsFC.com or stay up to date with Facebook, Instagram and Twitter.