Tony Bennett, the 19-time GRAMMY Award-winning musician whose music spans over six decades, will headline an exclusive Las Vegas engagement, “I Left My Heart in Las Vegas,” at The Venetian® Resort Las Vegas inside The Venetian Theatre September 25, 27 and 28 at 8 p.m.  Bennett’s daughter, Antonia Bennett, will open the performance with a collection of jazz/pop standards.  Bennett’s fan club members, Americana Express card holders, and Live Nation, etc., all have had early access to tickets.

Tony Bennett’s life and philosophy are the embodiment of the Great American Story. Having celebrated his 92nd birthday on August 3, 2018, his career as the pre-eminent singer of the 20th and 21st centuries is unprecedented. He continues to be embraced and loved by audiences of all generations.  Through his dedication to excellence and his insistence on quality, he has become the keeper of the flame by extolling the virtues and values represented by the Great American Songbook. Tony has been on the front lines of every major issue impacting the cornerstones of this country’s modern history. He has performed for eleven U.S. Presidents, is a World War II veteran who fought in the Battle of the Bulge and participated in the liberation of a concentration camp, and marched side by side with Dr. Martin Luther King in Selma to support civil rights. Throughout his life, Tony Bennett has been a dedicated pacifist and proactive humanitarian selflessly supporting many causes whose goals benefit the lives of millions. His love for his country has earned him the distinction of national treasure and United Nations has named him a Citizen of the World as one of their foremost ambassadors. In 1999, Tony Bennett, with his wife Susan Benedetto, a former public-school teacher, founded Exploring the Arts (ETA) to strengthen the role of the arts in public high school education. ETA’s first endeavor was the establishment of Frank Sinatra School of the Arts (FSSA), a public high school founded in 2001 by Tony and Susan in partnership with the NYC Department of Education. ETA continued beyond its commitment to FSSA to expand their support and by the end of 2019, ETA will partner with 44 public high schools — in all five boroughs of New York City and in Los Angeles. 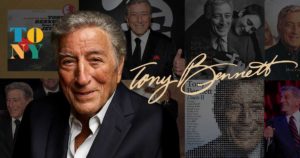 Through his artistry, Tony Bennett has connected in unprecedented fashion with all generations of audiences. His commitment to humanitarian ideals has bridged our differences by highlighting what we have in common as citizens of the planet. He has fought for the hard issues when others have turned a blind eye and has remained true to the authenticity and creativity of his musical vision. Tony has achieved the Great American Dream but has never forgotten his own roots and is constantly working toward ensuring that others can achieve their dreams as well. His life story is compelling in the lessons and values that it teaches: dedication, commitment, courage, and compassion. Bennett has received 19 Grammy Awards including the GRAMMY Lifetime Achievement Award, 2 Emmy Awards, is a Kennedy Center Honoree, and the NEA Jazz Master.  In 2017, he became the first interpretive singer to be honored by the Library of Congress receiving The Gershwin Prize. In the new millennium, Bennett’s artistry and popularity was higher than ever and he has sold over 10 million albums in the last 10 years alone.  In 2006, the year of his 80th birthday, his Duets: An American Classic was released. In celebration of his 85th birthday in 2011 the release of Bennett’s, Duets II debuted at #1 on the Billboard Album charts, making Tony the only artist at the age of 85 to achieve this in the history of recorded music.  Tony’s collaborative jazz album with Lady Gaga, released in 2014, Tony Bennett & Lady Gaga: Cheek To Cheek, debuted at #1 on the Billboard Top 200 album charts making Bennett, at the age of 88, the oldest artists to have a #1 album…breaking his own previously established historical record. His latest album, with Diana Krall, titled Love Is Here To Stay, celebrates the music of George and Ira Gershwin.

Tickets starting at $49.95, plus applicable fees, are now on sale to the general public. Tickets will be available for purchase at Ticketmaster.com, venetian.com, any box office at The Venetian Resort or by calling 702.414.9000 or 866.641.7469. For every ticket sold to “I Left My Heart in Las Vegas,” Tony Bennett will donate $1 to to Exploring The Arts, Inc.

Rhino Pro Truck Outfitters, a leader in fleet, commercial and off-road vehicle installations, a one-stop shop installer of accessories and fabrication for trucks, commercial vehicles, and cargo vans, has signed on as title sponsor of Las Vegas Motor Speedway’s Sept. 14 NASCAR Xfinity Series race.  The event will be called the Rhino Pro Truck Outfitters 300 and will be the second event of the 1.5-mile superspeedway’s second NASCAR tripleheader of the year. It will serve as the final regular-season race for the Xfinity Series and will finalize the field of 12 for the series’ playoffs. This marks the fourth time LVMS and Juan Carlos Martinez-owned companies have partnered together, but the first time for the NASCAR Xfinity Series.

“We’re thrilled to welcome Rhino back to the LVMS sponsor family,” LVMS President Chris Powell said. “We have a long history with Rhino as a race title sponsor, and it’s a pleasure to have such a top-quality company joining Westgate and South Point as partners for this September’s tripleheader weekend. It has been a great year for LVMS, and we can’t wait to put on another fantastic show for NASCAR fans in September.”

“We love Las Vegas Motor Speedway and NASCAR, and we are looking forward to a great weekend as title sponsor of the NASCAR Xfinity Series race this September,” said Juan Carlos Martinez. “NASCAR fans are a big part of our target demographic, and their loyalty to the sport and the automotive industry makes this partnership a natural fit for Rhino Pro. We already have a strong presence in Las Vegas with our fleet services, and we’re confident this race entitlement will be a great platform for us to expand our reach throughout the LVMS and NASCAR fan bases.”

The Rhino Pro Truck Outfitters 300 will be preceded by the World of Westgate 200 NASCAR Gander Outdoors Truck Series race on Friday, Sept. 13, and followed by the South Point 400 Monster Energy NASCAR Cup Series Playoffs kickoff event on Sunday, Sept. 15. Tickets for all LVMS races are available at www.lvms.com or by calling 1-800-644-4444.

Rock ‘n rollers The Doobie Brothers announced today additional headline tour dates for 2019 including a stop at The Pearl Concert Theater at Palms Casino Resort on Sunday, Sept. 15, 2019 at 8 p.m.  The Doobie Brothers have been delivering mind-blowing, roots-based, harmony-laden, guitar-driven rock and roll for more than four decades, selling more than 48 million albums and winning four GRAMMY® Awards. Boasting one of the most loyal fan bases in music, The Doobie Brothers continue to write and record new material and tour the world. Their No. 1 singles “Black Water” and “What a Fool Believes,” both gold, lead a catalog of indelible songs that include: “Listen to the Music,” “China Grove,”  “Jesus Is Just All Right,” “Rockin’ Down the Highway,” “Long Train Runnin’,” “Take Me In Your Arms,” “Takin’ it to the Streets,” “Minute by Minute,” “You Belong to Me,” “The Doctor,” and more. In all, the Doobies have tallied up five top 10 singles and 16 top 40 hits. Beginning with their multi-million-selling sophomore collection Toulouse Street, the Doobies have three multi-platinum, seven platinum, and 14 Gold albums. Best of the Doobies has sold more than 12 million copies – a rare “diamond record.”

The Doobie Brothers also recently announced their latest release from Rhino Records, The Doobie Brothers: Live From The Beacon Theatre. The band returned to the legendary Beacon Theatre for the first time in 25 years to perform its landmark albums, Toulouse Street and The Captain And Me, in their entirety, plus a few select hits. This historic performance offered an opportunity for Doobie fans to hear deep cuts and songs never-before performed live by the band. Both audio and video of that special performance are available now in 2CD, 2CD/2DVD, and Blu-ray versions.

A new book is out this week and it’s available on Amazon. It’s title is “Eyes in the Sky” and is in paperback. It’s author is Karen Leslie. Now I don’t usually promote books in this column, however, since I am actually on the cover, and have a couple stories inside (along with my roomie, Curt Thompson), and a couple of more friends and their stories, I’m doing just that—promoting it to the world. It is truly a “Blast of Vegas Past!”

Who built the box that stored Benny Binion’s silver dollars decades before they were uncovered in the Pahrump desert? How did Steve Wynn leverage Caesars Palace into buying land that would enable him to purchase the Golden Nugget? Who threw Willie Nelson out of the Mint Hotel long before he became a country icon? And how did over two million dollars in silver coins disappear from a Las Vegas Hilton slot machine without someone noticing? Join the “Mouse Pack,” six Las Vegas insiders and old-timers with careers spanning decades in the gaming industry, as they provide a fascinating glimpse into the inner workings of the city they helped create.

Beginning during the days of organized crime and extending well into the corporate era, the experiences of a sign-builder, casino executive, attorney, publicist, food & beverage director, and chief engineer provide a delightful and refreshingly different peek at the behind-the-scenes machine that built Las Vegas. They arrived in Las Vegas as ordinary young men, their futures uncertain in an untamed land of dust storms and tumbleweed. But the extraordinary opportunities they encountered as they pursued their dreams rewarded them with rich and unique lives and a special place in the history of one of the most remarkable cities in the world.

Their stories of rubbing elbows with the mob, the superstars and the gambling elite during the Las Vegas glory days are sure to please young and old alike. What really happened in Las Vegas? Look inside these pages and find out!

The book is a great read gang. Do yourself a favor, and me, order the book on Amazon. We, the Mouse Pack, will be doing some book signings in the weeks ahead, and I’ll keep you informed of locations and times.

Derek Tadashi Morishita has joined SLS Las Vegas (soon to be re-named the Sahara) as the new director of restaurants. In this role, Morishita will oversee operations for the resort’s acclaimed dining establishments including the award-winning Bazaar Meat by José Andrés. Morishita joins SLS with more than 10 years of experience in the food and beverage industry including holding senior level roles overseeing high-end culinary establishments across the world-famous Las Vegas Strip.

“Derek’s wealth of expertise will be of tremendous value as we continue to elevate our culinary program,” said Anthony Olheiser, vice president of food and beverage at SLS Las Vegas. “Our team is committed to providing curated and memorable experiences for our guests, and Derek will play a critical role in the diversification and enhancement of our portfolio.”

Well, gang, now you have all the latest news  Hope do see ya at a book signing soon.