The Railroad Pass Hotel/Casino, the oldest existing licensed casino in the country, has many traditions accumulated over the years, and one of the most rewarding ones, is the Annual United States Marine Corp’s Toys For Tots drive. The Fifth Annual drive will take place this Saturday, starting at 9:00 a.m. at the west 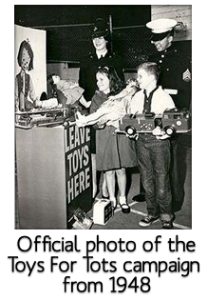 entrance to the Railroad Pass Hotel/Casino.

“This is the fifth year that the MGM Railroad Pass property has supported the Marines and their Toys For Tots motorcycle event to raise money for the children of Las Vegas,” Curt Thompson, Director of Operations, said.

Toys for Tots began as a Los Angeles charitable effort in 1947. William Hendricks was inspired by his wife, Diane, when she tried to donate a homemade Raggedy Ann doll to a needy child, but was unable to find an organization to do it through.  At her suggestion, Hendricks gathered a group of local Marine reservists, including Lieutenant Colonel John Hampton, who coordinated the new effort. That first year, the Marines collected some 5,000 toys for local children, from collection bins placed outside of all the Warner Bros. movie theaters in the Los Angeles area. In 1948, Toys For Tots was launched as a national campaign. And the rest is now history.

Each year, some 600 to 800 motorcycle riders from throughout the valley, converge on the hotel to support the Marines in their annual event.

After more than 15 years of planning, the Neon Museum a Las Vegas historical institution dedicated to the preservation and celebration of some of the city’s most distinctive architectural landmarks will officially open its doors to the public on Saturday, Oct. 27.

The Neon Museum, located at 770 Las Vegas Blvd., North, is home to a collection of more than 150 neon signs. Dating from the 1930s, this is the largest collection of neon signage in the world and a unique record of Las Vegas’ colorful history. Inside a two-acre outdoor museum space,

known as the Neon Boneyard, iconic signs from the city’s most celebrated properties — including the Moulin Rouge, the Desert Inn, the Flamingo, the Sahara, the Tropicana, and the Stardust — are displayed alongside those from various other bygone restaurants, hotels and businesses.

The museum’s new visitors’ center will be located on-site in the recently rehabilitated La Concha Motel lobby, the seashell-shaped, Mid-Century Modern architectural masterpiece designed and built by architect Paul Revere Williams. Originally constructed in 1961 on Las Vegas Boulevard South, next to the Riviera Hotel, the La Concha lobby was saved from demolition in 2005 and moved to its current location in downtown Las Vegas in 2006.

According to Bill Marion, chair, Neon Museum’s Board of Trustees, the museum’s official opening will bring both a significant cultural and economic impact to the community. “There is renewed interest in ‘old’ Las Vegas and in the rediscovery of the historical downtown area. The Neon Museum will play a major role in this renaissance, by bringing new visitors to downtown Las Vegas, by creating additional opportunities for tourism growth, and by adding to the ongoing economic revitalization of the area,” says Marion.

Tours of the Neon Boneyard, which last approximately 45 minutes, will be available to the public every half hour starting at 10 a.m., with the last tour departing at 4 p.m., every Monday through Saturday. Tickets are $18 for adults; $12 for students with valid ID, senior citizens, veterans and Nevada residents.  Children ages 6 and under are free. Tour capacity is limited. To ensure admission on the date and time desired, visitors are advised to purchase their tickets in advance through the Neon Museum’s Web site, www.NeonMuseum.org. The La Concha Visitors Center will be open Monday through Saturday from 9:30 a.m. until 5:30 p.m.

Las Vegas Motor Speedway has reached an agreement that will make Richard Petty Driving Experience (RPDE) the exclusive stock-car driving experience at the speedway. The multi-year agreement was announced today by LVMS and RPDE officials. 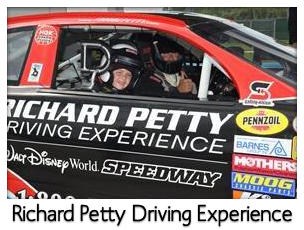 “The partnership with RPDE has been one of the strongest relationships the speedway has had since it opened in 1996,” said LVMS president Chris Powell. “Each year, thousands of people visit Las Vegas Motor Speedway to take part in the experience. Richard Petty has the most popular and longest running stock-car driving school in the country, and we are excited to be its West Coast home for many more years.”

RPDE has been running at Las Vegas Motor Speedway since the facility opened in 1996. It will offer NASCAR drive and ride experiences on more than 200 days each year for the duration of the agreement. “Las Vegas has long been one of our most successful venues, and we’re thrilled that we will continue to satisfy the need for speed for thousands of visitors,” said Brian Flynn, CEO of Petty Holdings, owner and operator of RPDE. “We have made LVMS our west coast hub for 16 years and hope to continue the relationship we have with the speedway and the city’s residents, tourists and business travelers for many more years.”

On Friday and Saturday, November 9 and 10, the LVH, formerly the Las Vegas Hilton, will host Hollywood Show Vegas, featuring the sale of movie and television memorabilia on Friday, from 6 to 9 p.m., and a celebrity autograph show on Saturday, from 10 a.m. to 5 p.m.  It’s a chance to meet some of your favorite actors and actresses.  Among the nostalgic celebrities scheduled to participate, are Linda Blair, Morgan Fairchild, Jimmie “JJ” Walker, Julie Adams, Murray “The Unknown Comic” Langston, Paul Michael Glaser, Butch Patrick, Beverly Washburn, Felix Silla, Johnny Whitaker, Cynthia Pepper, Brandon Cruz, Eddie Mekka, Dyanne Thorne and Chris Atkins.  Tickets for Friday are $10, and Saturday admission is $20.