The Laugh Factory, located on the mezzanine level of the New Tropicana Las Vegas, is presenting an outstanding combination of stand-up comedy with Don Friesen headlining the two nightly shows, Jeff “Big Daddy” Wayne fills the featured spot, and Edi Gibson is the hostess with the mostest through Sunday, April 10.

If you missed Don Friesen’s hilarious one-hour Showtime special, “Ask Your Mom,” you’ve got to catch him live! Engaging, clever and just flat out funny, Friesen captures the irony of parenting, marriage and everyday absurdities through characters, voices, parodies and some of the best-written comedy routines around. Friesen’s credits include Showtime, “Live at Gotham,” “The Lewis Black Christmas Special” and “Comics Unleashed.” He was also featured in TBS’ “The Comedy Festival” in Las Vegas and is wildly popular on Southern California’s 95.5 KLOS 5 O’clock Funnies and SiriusXM satellite radio.

Jeff Wayne is one of the busiest comedians working today. He can be seen performing – and often headlining – on luxury cruise ships worldwide, in Las Vegas casinos, at concerts, comedy clubs, on stage in theatres and very soon starring in his first major motion picture. Wayne, a veteran comedian, began his career at The Comedy Store in Hollywood, working with the likes of Chris Rock, Howie Mandel, Jim Carrey and Roseanne. Billed as “a troubled man for troubled times,” critics and audiences agree that, above all, he’s hilarious.

Wayne has appeared on HBO, A&E, NBC, ABC, CNN, FOX, Showtime, and internationally on shows on the BBC, CBC and Scandinavian TV. He is frequently heard on XM/Sirius Radio and the routines from his four hilarious CDs are frequently played on comedy stations worldwide. Originally from Kentucky, the busy father of three now lives in Los Angeles – but feels most comfortable with a microphone in his hand, standing on a stage, in front of a dark room full of strangers, making them laugh out loud, applaud and often stand to thank Jeff “Big Daddy” Wayne.

Edi Gibson is a standup comic originally from Sacramento CA, now based in Los Angeles. She has appeared as a cheerleader on the hit television show GLEE, as well as many MTV shows. She is the former Miss Universal City and has competed in the Miss California pageant. She’s perfect girlfriend material.

Award-winning singer-songwriter and headline entertainer Clint Holmes will take the stage at M Resort Spa Casino on Saturday, April 23. Performing inside the 2,300-seat M Pavilion and backed by the 10-piece band Santa Fe and the Fat City Horns, Holmes will deliver an unforgettable performance featuring contemporary hits and selections from the American songbook.

With more than 20 years of experience as a performer, Holmes is best known for his casual elegance on stage, silky vocal styling’s and warm comedic touch. His repertoire ranges from contemporary to classic, with elements of jazz, opera and everything in between. Holmes has served as Joan Rivers’ sidekick and announcer on “The Late Show,” the musical feature and event correspondent for “Entertainment Tonight,” and as the host of his own Emmy award-winning talk/variety show.

A favorite in the Las Vegas community, Holmes has been named “Best Kept Secret” by Las Vegas Life Magazine, “Best Singer” (two years in a row), “Best All-Around Las Vegas Performer” and “Favorite Male Las Vegan” by the Las Vegas Review-Journal. Additionally he was inducted into the Buffalo Musical Hall of Fame and into the Casino Legends Hall of Fame.

Defending Top Fuel world champion Antron Brown raced to his first victory of the season Sunday at the DENSO Spark Plugs NHRA Nationals. Alexis DeJoria (Funny Car) and Jason Line (Pro Stock) also were winners in their categories at The Strip at Las Vegas Motor Speedway in the fourth of 24 NHRA Mello Yello Drag Racing events. Brown powered his Matco Tools dragster to a 3.843 second pass at 314.60 mph to defeat first-time finalist Troy Buff, who drove his Bill Miller Engineering dragster to a 3.918 at 307.58 in the runner-up effort.

“It never gets boring,” Brown said. “It’s more than just a trophy, it’s all the hard work it takes to get here. We struggled the first three races but we just kept digging we kept our head down and just kept going.” With the win, Brown moves to second in the Top Fuel points standings, trailing leader Brittany Force. Force lost to Buff in round two. Brown defeated Leah Pritchett and Dave Connolly before facing off against Buff, who defeated JR Todd in the semis. Brown has 55 career wins in 98 final round appearances, including 39 wins in Top Fuel.

In Funny Car, Alexis DeJoria piloted her Tequila Patron Toyota Camry to a 3.968 at 315.49 to overtake defending world champion Del Worsham in his DHL Camry. Worsham raced to a 3.988 at 323.58. It is DeJoria’s second win at LVMS, where she also won in 2014, and her fourth Funny Car victory.

“This fourth trophy was definitely a difficult one,” said DeJoria, who had not won in the last 33 races. “It took a lot of risks to get here. We made consistent passes down the racetrack all four runs in qualifying and on race day as well. I don’t know when the last time was that we did that. It’s incredible to be a part of this.” DeJoria moved to eighth in the Funny Car points. Robert Hight maintained the points lead in his Auto Club Chevy Camaro after losing to DeJoria in the quarterfinals. DeJoria also outran 16-time world champion John Force in the semifinals. It is the first time in NHRA history where three women have raced to wins in nitro categories in consecutive events. DeJoria’s Funny Car win follows Top Fuel wins in Phoenix and Gainesville by Leah Pritchett and Brittany Force at the last two events. “It’s great to be a part of that history,” DeJoria said.

In a battle of Chevy Camaros, two-time world champion Jason Line defeated KB Racing teammate Bo Butner in the Pro Stock final after Butner turned on the red light at the start. Line extended his points lead with his second win in his fourth consecutive final round appearance to open the season. “It’s been special to say the least,” said Line, who beat Matt Hartford, Chris McGaha and Erica Enders in route to the final. “It’s been a fun ride. Hopefully it continues like this for the rest of the year.”

It is Line’s 39th career victory and the fourth consecutive victory for the KB Racing team.  Line widens his points lead over teammate Greg Anderson and Butner, who defeated Anderson in the semifinals, sits in third for KB Racing.

The City of Henderson dedicates a day this month to celebrate one of the world’s greatest inventions, the bicycle. Crazy Spokes is scheduled for 9 a.m.-2 p.m. on Saturday, April 9 at the Henderson Events Plaza, 200 S. Water St. Event activities include a 30-mile bike ride, 5.5-mile family fun ride and the Healthy Henderson Fair. The cost is $20 per adult and $10 per child in advance for the 30-mile ride, and $5 per person for the family fun ride.

Wearing colorful and unique outfits, cyclists of all ages will travel in style as they wind their way through the River Mountains Loop Trail back to the start/finish line at the Henderson Events Plaza. Onsite registration is at 9 a.m., with the 30-mile ride beginning at 10 a.m., and the 5.5-mile family fun ride starting at 10:30 a.m. 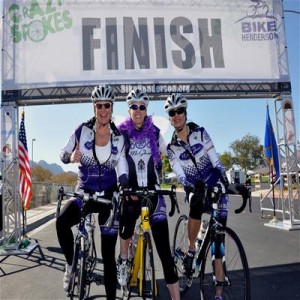 The Healthy Henderson Fair takes place from 9:30 a.m.-2 p.m. at the Henderson Events Plaza. Bicycling enthusiasts and novices to the hobby will enjoy a variety of attractions such as safety and bike demonstrations. The festival also includes a number of health and fitness booths, children’s activities and a chance to sign up for the city’s annual community weight-loss challenge.

Crazy Spokes is one of the city’s signature bicycling events. It not only celebrates the bicycle as an alternative mode of transportation and a fun way to exercise, but also acknowledges Henderson as a Bicycle Friendly Community.