Went to see vocal impressionist Veronic in the Jubilee Theater, inside Bally’s Las Vegas, last Saturday evening. It had been quite a spell since I had been back to one of the great hotels of our village, and wow, has it changed a lot. We, Cathy Bittinger who was my guest this particular evening, missed seeing the singing impressionist the first time she performed as a resident performer at the hotel. 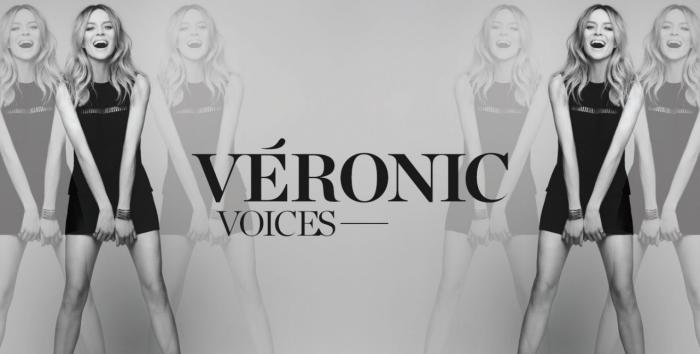 I have to tell you right off the bat, she is terrific!  Awarded, “Best Singer 2014 by the Las Vegas Review-Journal,”  vocal impressionist Véronic DiCaire headlines her hit show, co-produced by Celine Dion, “VÉRONIC Voices.” It’s hard to count the voices she does, because you become mesmerized immediately, upon hearing her opening song. It’s unbelievable what she can do with her voice. As Veronic tells it, when she was young and growing up on her parent’s farm, she used to sing to the cows, while dancing in the barn. “They enjoyed my voice,” she laughed, “and we got lots of milk.” Veronic’ s fantastic ability to perform, not only the hit songs of such ladies as Celine Dion, Sheryl Crow, Billie Holiday, Shakira, or Amy Winehouse, but about another 40 or 50 as well. And the voices, if you close your eyes, you swear it’s the star herself singing—it is as near perfect as anyone can get.

This little lady, from the farming community of Embrun, just outside of Ontario, Canada, is 37, and can’t be more than 5’2” tall, if she’s that? But, the voice is as big and she’s as tall as she’ll ever need. She performs the songs, and voices, of women who meant something to her, personally, during her growing years, and today, including such icons as Edith Piaf, Holiday, Patsy Cline, and Karen Carpenter, all who are no longer with us. We sat listening to every voice as she went through different phases of music, from the Rock’n Roll singers, to the classic singers, from the Grand Ole Opry (country music), to Pop, and famous songs from the movies. It’s pretty hard to name someone she didn’t do! There was Donna Summer, Tina Turner, Susan Boyle, Britney Spears, Pink, Rihanna, Beyoncé, Shania Twain, Reba, Dolly and Faith Hill, to just give you an idea of her range. And, she has six fabulous dancers, who accompany many of the songs, and fill a void, when Veronic makes a costume change.

Cathy and I sat listening and waiting for two of our personal favorites. It was nearly time for Veronic to end the show (it ran about 1:35 minutes), and we hadn’t heard Barbra or Whitney yet? And then it happened.  The music began, and the notes hit our ears like magic. The song was “People,” and the voice was Barbra Streisand. That made our evening. Then it was time for the closer. Again the music notes told us the song and the singer: Whitney Houston and “I Will Always Love You.”

It doesn’t get much better than this.

Veronic, has also resumed her residency at Bally’s, with the launch of “Lend Your Voice,” a monthly awareness-building and fundraising effort for selected local nonprofits. Each month, Véronic will partner with a worthy cause and encourage audience donations by providing information on each of their missions during her performances at the Jubilee Theater.

“I came up with the idea for ‘Lend Your Voice’ while I was touring in Canada,” said Véronic. “I’ve been excited to return to Las Vegas and thought:  how can I use my voice to benefit so many of the wonderful organizations that support our community? In the show, I give audiences my impressions of female vocalists, so this is my chance to use my own voice to raise awareness for some really phenomenal organizations.”

The “Lend your Voice” campaign will launch in May with Opportunity Village as the first beneficiary. Each month, a new charity partner will be announced, and the nature of the partnership decided.

Co-produced by Celine Dion, “Veronic Voices,” returned to Bally’s, Thursday, April 24. Tickets for shows through Oct. 18 are on sale ranging in price from $30 to $120, plus service fees. Tickets are available at any Caesars Entertainment Las Vegas box office, by calling (855) 234-7469 or (702) 777-7776, or online at www.ballyslasvegas.com or www.ticketmaster.com keyword “Veronic.” For up-to-date show information, visit www.veronicvoices.com.

The Make a Wish Foundation of Nevada, and the Laugh Factory at the Tropicana Hotel, have teamed up for a very special evening of Comedy, starring headliner Max Amini, on Saturday, May 3, at 6:30 p.m. Amini, and his co-stars, Tom Clark and Robbie Pickard, will be donating their performances, and the Laugh Factory is donating 100% of the door, to make “Vinnie’s Wish,” come true. Vinnie is a sick little boy who needs a swimming pool in his back yard. Max, and his co-stars, perform at the Tropicana Monday, April 28—May 4, with regular shows at 8:30 and 10:30 p.m. 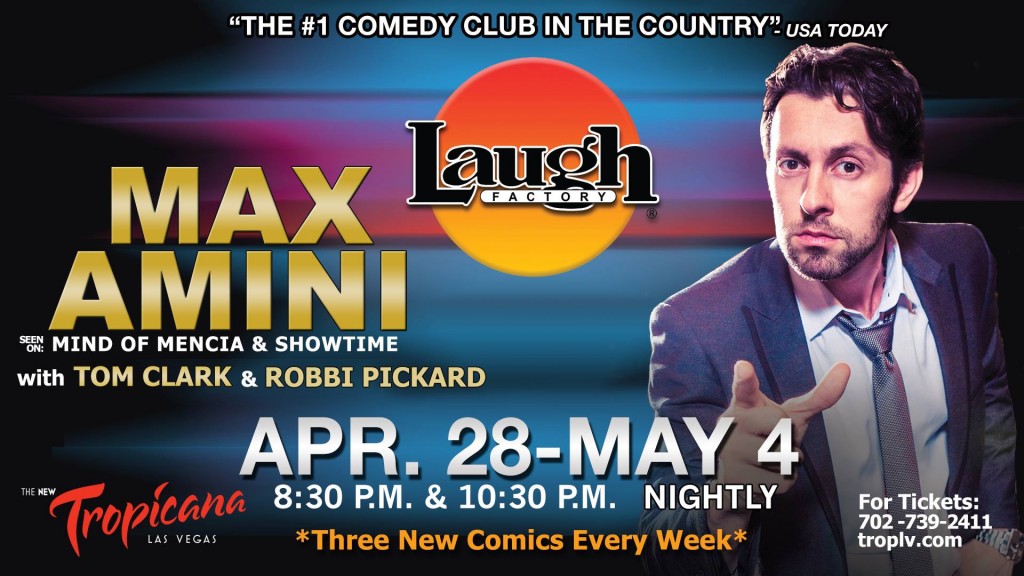 Amini was born in Tucson, Arizona, to Iranian parents. In 2004, Max graduated from UCLA’s School of Theater, Film and Television, and immediately began working as an actor. He has more than 50 film and television credits, including NBC’s ”Heroes,” and regular appearances on Comedy Central’s, “Mind of Mencia,” and a leading role in the upcoming feature film, “Beyond Paradise.”  Amini began his stand-up comedy career at the World Famous Laugh Factory in Los Angeles, and quickly built a reputation as one of the fastest rising comedians on the comedy circuit. Clark is the boy next door…that is, if you lived next door to an insane asylum. Whether it’s his off-kilter observations, knack for spontaneous crowd interaction, or his unusual physical comedy, Clark’s act has a little something for everyone. Tom has appeared on CBS’s “The Late Late Show,” NBC’s “‘Last Comic Standing,” and Comedy Central’s “Premium Blend.”  He appeared as a murderer on the highly rated TNT series, “Closer,” starring Kyra Sedgwick.  Clark was featured in the Hallmark movie, “The Wish List,” and in the Drew Barrymore directed movie, “Big Miracle.”    Pickard, the host this week, delivers his very tightly written material in what you would call, “a-laid-back delivery.” His performances have been winning over audiences across the country, and he has become a regular performer at, “The Improv,” “Laugh Factory,” and “Comedy Store,” in Hollywood.

For further information about “Vinnie’s Wish,” click here.  Tickets for the special show and all regular Laugh Factory performances are $39.95 and $49.95. For reservations please call 702-739-2411.

Idolized around the world, The Osmond brothers– Merrill, Jay and Jimmy – will perform at The Orleans Showroom, May 2, 3 and 4 at 8 p.m.  Having thrilled millions with their signature brand of entertainment, the legendary brothers have mastered a range of musical styles, including barbershop, pop, rock, country, and jazz.  Known for such classic hits as “One Bad Apple,” “Yo-Yo,” “Down by the Lazy River,” and “Love Me For A Reason,” the brothers’ close harmonies are unrivaled in the music world. More than five decades ago, the young Osmond boys made their first national TV appearance on “The Andy Williams Show,” in what was meant to be a one-time shot at the big time. That single appearance led the Osmond’s to seven seasons as regulars on the show. The Osmond brothers enjoyed professional gigs at Disneyland, and with “The Jerry Lewis Show,” before signing with MGM Records and skyrocketing to worldwide recognition. Known for their versatility and for shaping musical styles to fit their talents – between them, they have mastered 28 musical instruments. Success continued and in 1982, the Osmond’s transitioned their sound from pop to country music. Billboard magazine honored them with the “1982 Breakthrough Award,” and acknowledged them as the “Number One New Singles Group of the Year.”  Tickets are available starting from $34.95, plus tax and convenience fees. Tickets can be purchased at any Boyd Gaming Box Office, by calling 702.365.7075, or www.orleanscasino.com.